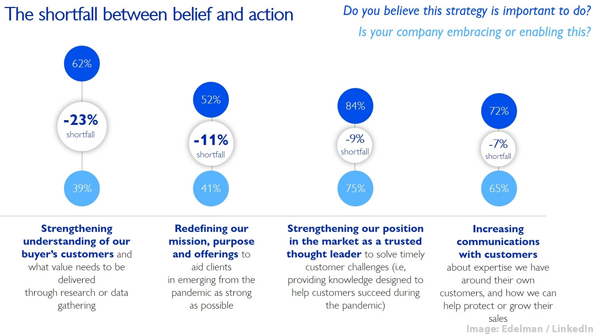 Now Is the Time for B2B Content
During the pandemic, video and webinar content has seen the largest increase in views according to recently-released survey data, while views of unique content assets during March through May climbed by 40 percent compared to earlier in 2020, with the average number of sessions per visitor up some 43 percent. ANA

Google Shares Exclusive Data On How B2B Buyers Changed, Adapted During COVID-19
64 percent of B2B buyers have increased their use of online video during the pandemic, with overall online marketing use rising by 88 percent including 45 percent who started using digital for the first time during the global health crisis, according to newly-released report data. MediaPost

Twitter’s Testing Audio Clips in DMs with Users in Brazil
Twitter has begun testing the ability to record up to 140 seconds of audio for inclusion in direct messages sent through the social platform, expanding on similar functionality recently added to public tweets, Twitter recently announced. Social Media Today

Facebook Announces New Limits on How Many Ads Pages Can Run Concurrently
Facebook has given notice that advertisers will face new limitations on the number of allowable simultaneous page ads, and that four new tiers of advertiser categories will be implemented in February 2021, the social media giant recently announced. Social Media Today

Emojis in Email Subject Lines: Do They Affect Open Rates? [DATA]
Recently-released survey data from nearly four million emails shows where emojis tend to work and not work, including a look at the diminutive visual embelishments’ sometimes-sizable impact on click-through-rates (CTRs) and other metrics. Search Engine Journal

Forrester: How to differentiate your brand with ethical marketing
Forrester has taken a look at the importance of transparent pricing, social responsible, fairness, and honesty and their significance when it comes to differentiating brands, and CMO examines recent findings of interest to digital marketers. CMO

How B2B companies are adapting customer engagement strategies during Covid
46 percent of B2B executives say marketing spending is being scrutinized more closely for its direct sales impact during the pandemic, while 50 percent say its important for their firms to redefine their mission, purpose, and offerings — two of numerous findings of interest to digital marketers in newly-released survey data. Edelman Have you found your own top marketing stories from the past week of news? Please let us know in the comments below.