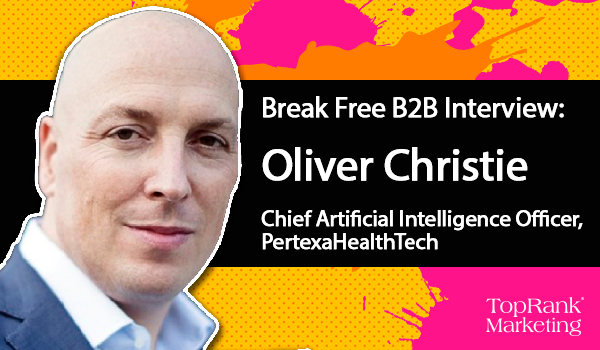 Just what is a B2B influencer, and what do they actually look like?

In our third season of Break Free B2B Marketing video interviews we’re having in-depth conversations with an impressive array of top B2B influencers, exploring the important issues that each expert is influential about.

Successful B2B influencers have a rare mix of the 5 Ps — proficiency, personality, publishing, promotion, and popularity — as our CEO Lee Odden has carefully outlined in “5 Key Traits of the Best B2B Influencers.”

Offering up all of those boxes and more is Oliver Christie, chief artificial intelligence (AI) officer at PertexaHealthTech, who we’re delighted to be profiling today.

Nothing helps individuals and the businesses they work for break free from the norm quite like a tech disruption. The microprocessor. The internet. Mobile data. E-Commerce. When these technologies came onto the scene, everything changed… but what’s next?

According to Oliver Christie, it’s AI. In his own words: “Artificial Intelligence is the biggest technology disruption of our generation.” As far as he’s concerned, A.I. isn’t just the future, it’s the present. In today’s new episode of the Break Free B2B Marketing Interview series, Christie speaks about the role of artificial intelligence in our lives, including topics like A.I. and morality, bias in A.I., and the direction of A.I.’s future.

Artificial intelligence isn’t science fiction. It’s very much a science reality, and Oliver Christie is one of the leading experts talking and consulting on the topic. In today’s 31 minute interview with TopRank’s own Josh Nite, he’ll be passing some of that expertise along.

If you’re interested in checking out a particular portion of the discussion, you can find a quick general outline below, as well as a few excerpts that stood out to us.

Josh: I’m really interested in what we were talking about before we started. The idea of human-centric AI. AI can feel like this distant or cold thing or something that is, you know, it’s powering my Netflix algorithm. But I don’t know how it relates to my day to day. How is it a human-centric thing? We’re thinking about people and individuals.

Oliver: Something we’re moving more and more towards is thinking about people as individuals and what matters to us. How we talk. How do we act? What are our interests? You mentioned Netflix. The algorithm which says what you should watch next. If that’s successful, you watch more. If it has an understanding of what you might like, you can see more media if you get it. If it gets it wrong, if it doesn’t know who you are, it is a turnoff and you never see the difference between that and other media services. I think that the next big leap is going to be our products and services are going to be much more reactive to who we are. How will we live? And so on. But there are some big challenges. So it’s not a quick and easy thing to do. But I think the future is pretty exciting.

“I think that the next big leap is going to be our products and services are going to be much more reactive to who we are.” @OliverChristie #BreakFreeB2B #ArtificialIntelligence #AI Click To Tweet

Josh: Have you ever been on Amazon while not logged in? It’s such a striking thing to open an incognito window or something and you see how much personalization goes into that page and how just clueless it seems when it’s not on there.

Oliver: Amazon’s an interesting one. It’s algorithm is better than nothing. And it works to a degree. Some of the time, if you match a pattern — so the music you listen to, the books you buy — f someone is quite close to that, it works. As soon as you deviate, it pulls down or as soon as you’re looking for something original, it also doesn’t work. So I think Amazon is a good example of where we are at the moment, but not where we could be next. Amazon doesn’t once ask, what are you trying to achieve in your shopping? What are you trying to do next? And I think that’s going to be one of the big shifts that will happen.

Josh: What are we trying to achieve with that shopping, though? Besides, for me, it’s filling the void of not being able to go out to a concert and having a party, having something to look forward to with deliveries coming in. What kind of intent are you thinking about?

Oliver: Imagine you had the same shopping experience and let’s say it’s for books, videos, or courses. And the simple question can be, what would you like to achieve in your career in the next six months? Where would you like to be or what’s happening in your personal life? Want some advice and information which could be really useful? I think this sort of tailoring is where things are heading. So it’s still selling books and courses and videos and so on. But it’s understandably the intent behind content. What could this do to your career? What could this do for your family life, your love life, whatever it might be? Now, of course, we’re all locked down at the moment. So it’s a very different sort of situation. But I think some of the same things still apply. There’s going to be a back and forth. So how much do you want to give up about your personal life? Better recommendation. And I think it’s kind of early in some respects. But the data they passed shows, yes, if you get something positive out of it, you’ll have to give up some of that previously.

Keep your eye on the TopRank Marketing Blog and subscribe to our YouTube channel for more Break Free B2B interviews. Also check out episodes from season 1 and season 2.

Take your B2B marketing to new heights by checking out out previous season 3 episodes of Break Free B2B Marketing: