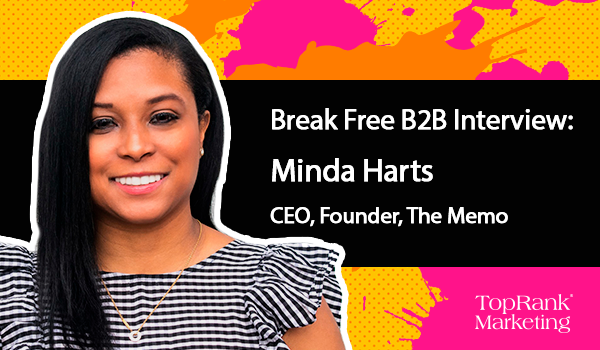 When it comes to B2B influencer marketing, it’s only natural to wonder just what an industry influencer actually looks like?

For our third season of Break Free B2B Marketing video interviews, we’re featuring conversations with leading B2B influencers, and examining the issues that each subject matter expert is influential about in their specialized industry.

For over a decade our team at TopRank Marketing has nurtured a strong community of leading influencers, developing close relationships with SMEs in many industries, and we’re delighted to share our latest episode of Break Free B2B Marketing.

2020 put a lot of things into laser focus that weren’t getting the attention they historically deserved. One of those things has been the necessity of greater diversity in the modern workplace. There’s no denying the fact that approximately 68 percent of C-level executives are white men and only some four percent are women of color. That’s no longer acceptable, and many businesses are actively seeking the advice of experts who can help them break free from outdated norms so they can move into a brighter, more creative, more diverse future.

One of the leading experts on how that can be accomplished is Minda Harts. Minda is a sought after speaker and thought leader who focuses on the topic of advancing women of color in the workplace and building diverse teams. She founded The Memo LLC, a career development company for women of color, and has published a similarly named book that gives actionable advice on this same topic. The Memo: What Women of Color Need to Know to Secure a Seat at the Table can be found at your favorite bookseller or online right now.

Minda is the sort of voice to listen to for any B2B marketer who wants to learn how to better speak to the needs and wants of a diverse population. That’s why we asked her to join us for the latest episode of our Break Free B2B Marketing Interview series.

If you’re interested in checking out a particular portion of our discussion, you can find a quick general outline below, as well as a few excerpts that stood out to us.

Sue: How do you counsel and guide women of color to deal with having courageous conversations and other issues?

Minda: Even in the moment when I’ve dealt with some of those micro or macro aggressions, depending on how you see it, I wasn’t sure how to respond to it, because it takes you off guard, right, you’re not prepared. And sometimes when it’s happening — your colleagues — especially if you’re the only woman, or the only black woman, might think that it’s a joke, or that so and so doesn’t mean any harm. But those things, again — intentional or unintentional — they still land on certain communities where it is harmful. And so what I would say is, one thing that I didn’t do, which is part of why I wrote the book, is to center yourself as a woman in the workplace. If something is harmful, have those courageous conversations to let people know that this is not okay. Right. And you can do that in a way that doesn’t have to be in front of everyone, but I wish that I would have been more courageous in bringing those kinds of tough conversations to the forefront.

“If something is harmful, have those courageous conversations to let people know that this is not okay.” — Minda Harts @MindaHarts #BreakFreeB2B Click To Tweet

Sue: Right, exactly. Okay, so I love this. You say, don’t take shit from anyone. And as a woman, you know, typically working in tech companies and running my own agency, I know that being strong, and having opinions and a clear direction, and not settling, stating a vision with passion that can be perceived as maybe being kind of a bitch. And so this gets tough because sometimes I find myself feeling beat down and ashamed for being strong. And I can only imagine that this would even be harder for women of color. Can you talk about that a little bit?

Minda: They’re both true. And I think you made a really good point — that oftentimes, people will say, “Well, I’ve had it hard too,” right? And two things can be true at the same time, right? You could experience the same things, and then I can experience it, but it might be that your proximity to power is a little bit better than mine. Right? But we are experiencing these situations. And I think that the reason why I say don’t take anything from anybody else, is because for so long as women, we’ve had to silence ourselves, right? We’ve had to silence ourselves at the expense of our own well being. You’re even seeing it, regardless of what political party, in this idea of being too ambitious — what does that even mean? Because somebody wants more, or in their lives they want to do a good job — they’re trying to figure out what good looks like for them. I think because that has been a narrative that we didn’t create, that’s why it’s important that we have to dismantle these systems, because these systems would say that any woman that has a perspective or has ideas, that she needs to sit down and know her place.

Minda: But that is part of the system that never saw us at the table. Right? Those are those systems. So I think we have to call it out when we see it, and I think we have to unlearn that thinking too. Because being in these environments, we would then question ourselves, “Well, maybe I shouldn’t speak up,” or those sorts of things. I think with women of color in particular, it’s a fine line, right? Don’t be too aggressive. Don’t say too much. You know, don’t be angry —  so it’s that office politics — trying to find that right angle. I think it goes back to having a squad, because if you have relationships inside the workplace, somebody can say, “You know what, that’s not the Susan I know, actually,” and I think that when we know each other better, we can stand up for each other in those moments and really dismantle a culture that would say that about women.

“We have to dismantle these systems, because these systems would say that any woman that has a perspective has ideas, and that she needs to sit down and know her place.” — Minda Harts @MindaHarts #BreakFreeB2B Click To Tweet

Keep your eye on the TopRank Marketing Blog and subscribe to our YouTube channel for more Break Free B2B interviews. Also check out episodes from season 1 and season 2.

Take your B2B marketing to new heights by checking out out previous season 3 episodes of Break Free B2B Marketing: