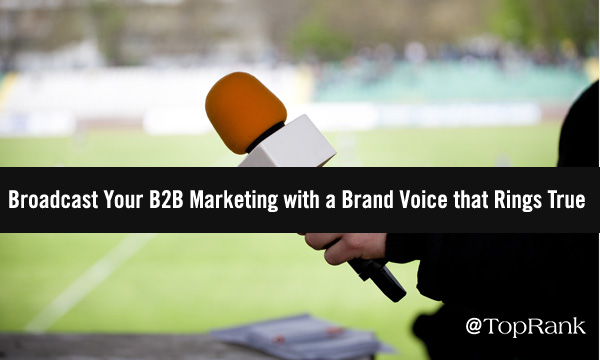 Last month, the sports world mourned the loss of John Madden, an iconic broadcaster who – for many of us – became the voice of NFL football.

Overshadowing his illustrious career as a head coach, which included a Super Bowl victory, Madden is best known as a legendary color commentator – likely the most recognizable and beloved in the history of football, if not all of professional sports.

What is it about Madden that made his voice and narration so resonant with fans? If you read through some of the various tributes to emerge since his passing, a few recurring themes stand out.

For B2B marketers who wish to develop an effective and impactful brand voice for their business, there are important lessons to be drawn from the way Mr. Madden went about his.

1 – Make Things Simple for Your Audience

Football can be a complicated and esoteric sport, especially when viewed through the lens of a former NFL head coach. But Madden didn’t fall into the trap of making viewers’ eyes gloss over with nitty-gritty X’s and O’s details. He translated things in a way that even the most casual fans could easily understand.

As his former broadcast partner James Brown put it, Madden “made the game fun and simple to understand.”

Likewise, the takeaway here for B2B marketers is simple to understand: don’t drown your audience in complexity and jargon. A recent global survey found that 76% of consumers are more likely to recommend brands delivering simple experiences, up from 64% in 2018.

Madden had some interesting quirks. Among them: he was afraid of flying. While traveling all around the country to cover NFL games in various cities, week after week, he would opt for long bus or train rides over airplanes.

It’s one of those things that made you see the human side in a larger-than-life figure. There was no shortage of them.

As a headline in the LA Times last week put it: “John Madden’s greatest gifts were humor, warmth.” He had a way of talking to his audience, not at them. “What made him so popular was that he was so genuine and so accessible,” said Al Michaels, another former broadcasting partner.

The article mentions that Madden was a “fount of funny stories and Jerry Seinfeld-type observations about human behavior.”

Humanity and humor have clearly emerged as key traits for winning brands. In a new “Trust in Advertising” study from Nielsen, humor joined brand values as top drivers of advertising response rates.

3 – Meet Your Customers Across Channels

Many members of the millennial and Gen Z cohorts didn’t become familiar with John Madden through his broadcasting work, but through his involvement with one of the best-selling video game franchises ever: Madden NFL.

His name and face on the cover lent crucial credibility to this breakthrough football sim, which debuted in the late 1980s. Releasing new editions each year, Madden NFL drew in young audiences and helped them learn about the sport interactively, through channels that were popular with these emerging generations.

B2B marketers far and wide are grappling with the realities of a changing audience comprising younger generations with different habits and preferences. Millennials currently make up the largest buying audience, and Gen Z will quickly start claiming a larger share as these young adults (born between roughly 1995 and 2005) rise in the professional ranks.

In this environment, it’s critical for marketers to think beyond traditional static content and blog posts as ways to make their brand voices heard. We need to connect with them on their terms. That might not mean making video games, but it probably does mean more video, more interactive content, and more tailored digital experiences.

Variety and versatility are key. According to recent research from McKinsey, “B2B customers now regularly use ten or more channels to interact with suppliers (up from just five in 2016).”

Sports – and football – are inherently about having fun. Sometimes people lose sight of this in the seriousness of competition and win/loss ultimatums. Madden did a great job of keeping things light and reminding his audience why they tuned in to begin with.

The casual, conversational language helped. So did his boisterous and energetic vibe. Madden’s catchphrase as a commentator was “BOOM!” – an exclamation he’d excitedly belt after a big hit on the field. He used his telestrator to almost comedic effect. He championed the “Turducken,” a strange turkey-duck hybrid that became a staple of Thanksgiving Day football.

I mean, just listen to how gleeful and hilarious the man was riffing about Gatorade buckets on the sideline.

One might not characterize the B2B research process as “fun,” but why can’t it be? Everyone understands the stakes and implications involved, but that doesn’t mean it can’t be enjoyable.

Don’t be afraid to lighten your tone, inject some levity, and remind customers why your brand is a different breed: it’s not business as usual.

His simplicity, his humanity, and his knack for having fun wouldn’t have mattered much if not for this core trait of John Madden: he knew football. He knew it deeply and exhaustively, as well as anyone. Viewers implicitly trusted his insights because of this. And they learned from him because of how he conveyed his knowledge.

An excellent write-up by Bryan Curtis at The Ringer sums it up perfectly:

“Madden’s genius was how he taught football. Those booms, that unbuttoned aura of regular guy-dom — all of that was an invitation. It made Madden’s classroom feel like a safe place, where you’d get a little smarter and the professor would never act like he was smarter than you.”

When it comes to establishing a stellar B2B brand voice, that really is what it’s all about. You want to demonstrate your authority and expertise to potential clients, who need to believe in these things to justify a major investment with your company. But you don’t want to rub how smart or great you are in people’s faces.

Invite them along for the journey. Talk to them, not at them. All of the qualities we’ve covered in this piece tie back to striking that crucial balance between relatable and reputable.

The payoff will be there in the end, because if you successfully and consistently harness such a brand voice, customers will come to like and trust you, which will lead to sales.

On that note, it bears noting as we conclude that in addition to his achievements on the field and in the booth, Madden was also a premier product pitchman. People were literally buying what he was selling.

Adopt the principles that made him great with your B2B brand voice, and you’ll be on your way to the same outcome.