I’ve known Andy Beal via blogging and search marketing conferences for a while now and had the privilege of speaking with him on a SEO Blogger and Reporter panel at the last WebmasterWorld Pubcon in Las Vegas.

While I had great respect for Andy’s accomplishments at building search marketing companies and developing top notch blogs, his performance during the panel was genuinely impressive. His grasp of the big picture and business aspects of search marketing were/are very insightful. My public relations firm has even hired Andy for some consulting on reputation management and I am happy to recommend him.

It’s all part of doing business in the industry, but I’ve been dealing with more and more parasites lately, so here’s my new definition:

What do you do?

Lameness in the SEO Biz

One of the blog networks that I write for is hosted within AllBusiness.com. If all goes well, they will launch their new design on Tuesday. Here’s a preview screen shot: 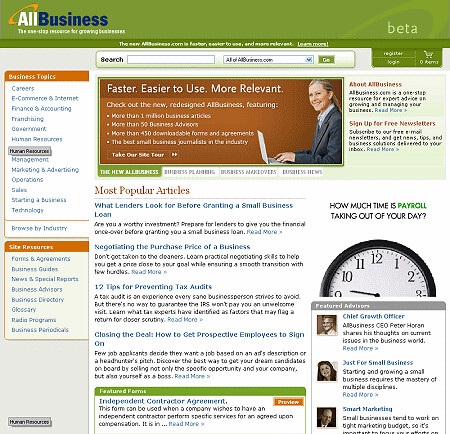 The old interface was getting very busy which is a challenge when you’re a site like AllBusiness.com with millions of documents. I think the new design is much cleaner and it’s great to see the bloggers, ah I mean, “Advisors” posts brought up higher in the page. I guess this means I should get busy and start posting there regularly again. 🙂

We’re just finishing up with a 6 month promotion called, “6 for 06” with AllBusiness.com where several consultants (like myself) volunteered time to help out selected small businesses with certain problems. The company I worked with was AdventureOut.com, a California based outdoor adventure company that also hosts an online store.

The good advice over at ISEDB from Scott Buresh regarding how ways clients sabotage the search engine optimization performed on their site has motivated me to write a few of my own along with comments on some of Scott’s suggestions:

Don’t Step on Your SEO

Matt Cutts at SES NYC – One of the sessions he’s participating on includes Robert Scoble and Jeremy Zawodny, “Pundits on Search”. I will be speaking at Pubcon in Boston with those two in a session about Blogging. Should be fun.

Todd Malicoat on WebmasterRadio.fm – Todd and Greg Niland talk links and more. Todd is a linkMASTER and an all around great guy. This is a must-listen podcast.

MSN Search updates search home page and search results. And as much as I am not a fan of MSN Search and rarely ever use it, I LIKE the new new MSN Search. Incidentally, Jensense has the scoop on ContentAds, the name of MSN’s new contextual ad program.

Marketing Experiments has announced a “Back of a Napkin” business planning contest. They say they are are looking for the next ‘Google’.

The winner will get a jumpstart package worth over $100,000 and will get to pitch their plan to some of the leading VC’s. In that $100 large there’s $25k of PR for three months. Ahem. I appreciate the PR firm’s valuation of their services, but $25k for THREE MONTHS?

During 2006, MEC Labs (the group of researchers behind the Marketing Experiments Journal) will work with the winning idea to help launch their business.

Entries are due no later than February 25 with finalists announced February 28 and winners announced March 31, 2006.

Hurry up, business plans can be registered online.

Can a Napkin Business Plan be the Next Google?