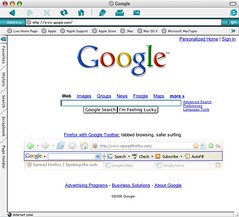 Google has started promoting Firefox on its homepage. If you are running IE, head over to Google.com and you should see an ad that says “Firefox with Google Toolbar: tabbed browsing, safer surfing” with an image of the Google toolbar in Firefox under that.

According to the Firefox team. “Firefox is the first third party product to be featured on Google‚Äôs homepage.”

The bond between Google and Firefox seems to be getting stronger. This can only mean great things for the browser on all platforms in the future.

So, what does Google do with toolbar data?