One vendor you’re sure to see at virtually every SES and Pubcon conference is web analytics company, ClickTracks. I had the pleasure of speaking at a few DMA conferences at the same time as ClickTracks founder John Marshall and found him to be one of the most enthusiastic evangelists for web analytics in the industry. On top of that he’s really a very good guy.

John and his VP of Marketing, Michael Stebbins took out a few ClickTracks’ freinds for dinner on Tuesday night and it proved to be some of the best conversation. I cannot emphasize enough, the importance of networking after the daytime sessions are over. 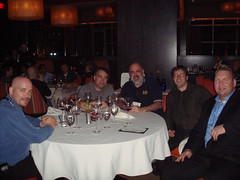 Here’s Mike McDonald of WebProNews, Dan Thies of SEO Research Labs, Greg Jarboe of SEO PR and Michael Stebbins from ClickTracks. Missing from the photo is one of Dan’s protoges, the amazing Shirley Tan. Check out my other photos of the Las Vegas Pubcon here. 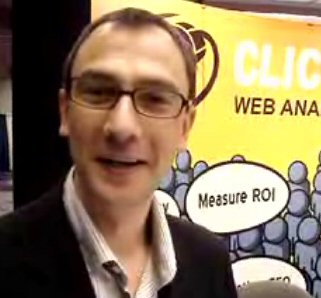 On Wed I found John Marshall at the ClickTracks booth evangelizing their click fraud tools to an attentive group of conference attendees. After that, he was nice enough to give this little interview about Pubcon. I hope Brett sees this because it’s great feedback about the conference.

I will be posting several other short interviews after my session today about public relations and social media. Just watch my YouTube Channel.