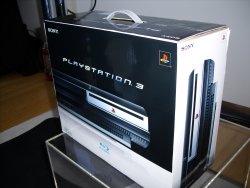 I couldn’t help myself. The Best Buy employee walking around the games area with a Playstation 3 under his arm was just too tempting. I was there to buy a Nintendo Gameboy Advance game for my oldest and I had to ask, “How many of those PS3’s do you have?”. The BB guy said “6”. I said, “I’ll take it”. And walked out of the store with 1 game, 3 Blu-Ray movies, an HDMI cable and a 60 gig PS3.

Somehow I’ll rationalize this as a purchase for the kids, but who’s kidding who? I know what a stand alone Blu-Ray DVD player costs right now, so in my mind, this was a good deal. Besides, we used our old PS2 for movies 90% of the time anyway.

It was an interesting sales tactic by Best Buy, that’s for sure. Having 1-2 employees walk around the store with the PS3’s. I bet they sold a lot of them that way.

The only thing that nearly made me walk out of the store was the customer service gal that rang me up. She pitched the ESP hard. One more peep and I was out of there but I think she sensed I just wasn’t in to her pitch. I may go back and get it later, I believe I have 30 days after the purchase. I haven’t had the hard sell from Best Buy like that in 10 years. It was lame.

Incidentally, they were out of Gameboy Advance players at Best Buy so I got one from Target. They were out too, but I asked their customer service people to check the return bins and they found one, unopened. 🙂

Merry Christmas and Happy Holidays to all!