Day three of Search Engine Strategies San Jose started off with Danny Sullivans’ last keynote presentation where he talked to Marissa Mayer of Google, who was giving her first keynote. Overall they talked about universal search, touch on video, personalized search, iGoogle and the iPhone. 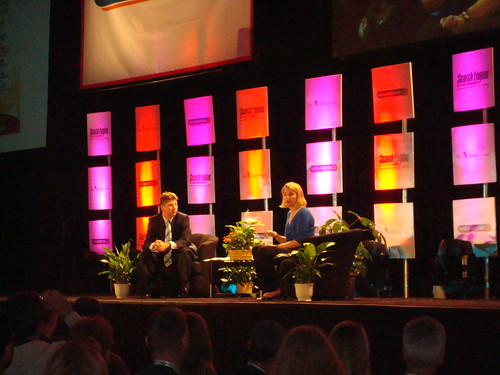 Marissa sated that they felt users were happy with the new universal search. A lot of work had to go into chainging the algorithm to incorporate the additional sources but they were happy. She did say that they had a long way to go yet and other sources, such as scholar, may be added in the future. Google’s goal with universal search is to be more like an encyclopedia with as much relevant information right at your finger tips.

On the topic of personalization, Google has tens of millions of users in the personalized search program. Google is currently just in the beginning stages of finding the best way to personalize results and are even kicking around the idea of putting visual markers on results that have been edited for the user. One tip that she pointed out was that if the user felt that they no longer wanted personalized results based on a topic they searched in the past, the user can go into their search history and simply delete the old searches to remove them from Google’s memory. Google really wants personalized search to be transparent and have the user be in control. However, they haven’t yet decided if they are going to add an on/off button for personalized results.

Marissa also compared Facebook and iGoogle. Both allow customization and the ability to add small applications to each service. Both are open platforms but she admitted that Facebook offers a bit more tie-in to the source website. However, Facebook is currently Marissa’s favorite non-Google service. Her current favorite Google branded services? Book Search, iGoogle and Google Desktop.

There was also a bit of discussion around mobile. More specifically, the iPhone. It was almost like an iPhone commercial as Marissa walked though all the cool items that could be done with Google local on an iPhone. Google has really seen an increase in mobile searches this summer and also saw a good increase around the time the iPhone was release. They decided to partner with Apple because of the way Apple is revolutionizing the mobile market. Don’t have an iPhone? Google apps still work well on other phones too. And if you just want a quick bit of information, 1.800.GOOG.411 is the free 411 service they launched. [Note from Lee: I’ve been using GOOG411 and it’s fantastic!]
Overall, there were no secrets or new products revealed. There was just a good overview of where Google is going and highlights on some of the new Google offerings and how they work.