As I attended “Are Paid Links Evil?” as my last session of Day 2 at SES San Jose 2007, I was glad to see that everyone there was still in high spirits after the long day of learning, blogging, networking and preparing for the Google Dance. However, I didn’t expect to see a battle of the Autobots against the Decepticons. 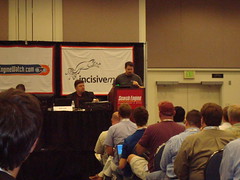 First off in this battle of the galaxies was the ever-famous Matt Cutts, Software Engineer Guru at Google, stating clearly and concisely that paid links that pass Google PageRank are in clear violation of the Google webmaster guidelines. And as we all know, we do NOT want to be in violation of these. Any violation of these commandments could result in being bounced out of the Google index, which could severely impact your website traffic in a very negative way.

Optimius Prime, err, Matt says that there are places to buy paid links which do not pass PageRank and therefore are seen as okay. These places include AdBrite, Quigo and IndustryBrains. Matt made it very clear that paid links, while not evil, can be seen as cheating.

And, as we all know, the Autobots are the do-gooders in the universe and they fight for the fair and ethical practices of all beings, human or otherwise, in said universe. Paid links, Matt says, are like driving all alone in your car and taking the carpool lane. Google and the rest of the Autobots kind enough to host the Google Dance on their campus tonight are the protectors of the good and the defenders against unethical practices in the search universe. 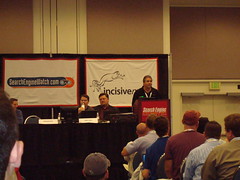 Battling Matt Cutts was the hilarious and entertaining Michael Gray, President of Atlas Web Service, and Megatron in this little narration. Michael came out swinging with cuts against Matt, stating loudly and clearly that Google is not the government and not the major authority board and definitely will not throw you in prison for violating their webmaster guidelines.

Megatron fought hard with humor, cartoons and a loud voice, saying that Google and the Autobots are trying to create fear, uncertainty and doubt by threatening low rankings and less website traffic if you buy links. But Michael’s main point was that Google is a for-profit company who knows that paid links work, no matter what guidelines are being violated. And Google just doesn’t want anyone messing with their algorithm that has been working so well for the rest of us practicing organic SEO.

Now, this post is not to say that Google is better, and that paid links are a sort of weapon used by Decepticons to take over the universe, but it is easy to see how I could position Google as the “good guys” versus the “bad guys” who are advocating buying links.

And when referencing being pulled out of the Google index because a site is purchasing links, even Megatron himself bowed down and admitted “It’s Google’s index. They are allowed to do whatever they want.”

So it seems that, for now at least, the Autobots at Google are winning with their webmaster guidelines for their search universe, and when they catch a Decepticon paying for links, there could be dire consequences. But I guess we will have to see how Matt Cutts and Michael Gray handle their issues.

Something tells me it won’t be nearly as intense or violent as some of the Transformer battles. But we may just have to wait and see.