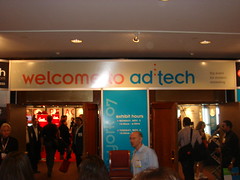 Arriving at JFK was surprisingly un-eventful and smooth. Carry on is certainly the way to go. I walked right off the plane and to the taxi area where a town car agreed to take me to Midtown for the same price as a cab. There is no substitute for a ride with legroom.

Upon arrival at the Hilton where the ad:tech NYC conference was being held, I ran into Patrick Gavin of Text Link Ads/Media Whiz. A great guy and very successful as well. I didn’t think to take a photo, but in case you don’t know him, he looks like that fellow on the show “The Bachelor”. 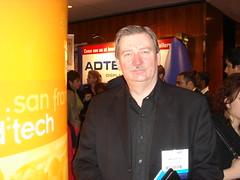 Next I ran into Bruce Clay who will speak Thursday on what is arguably the only session in the whole conference dedicated to search engine optimization. Unfortunately I have to fly out before the session. 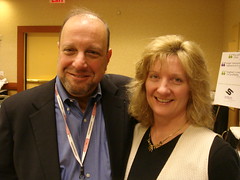 In the press room I had the pleasure of running into Larry Chase which turned into (as always) a great conversation about online marketing and in this case, applications for repurposing blog content while avoiding duplicate content issues. David Berkowitz of 360i and Mediapost’s Search Insider Summit was in press room attendance as well. 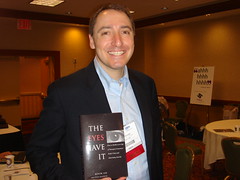 After meeting with Larry, Kevin Lee stopped by with his new book, “The Eyes Have It”, which I plan on reading when I get back to Minnesota. Congrats to Kevin on the new book. 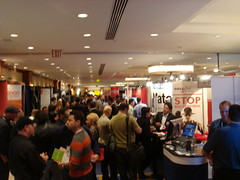 The exhibit hall floors here at the Hilton are PACKED. There’s literally a maze of rooms on level one with more ad networks and affiliate program vendors than I ever thought a market could bear. 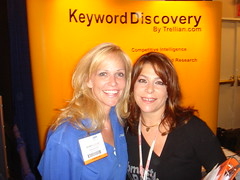 Cheese! On the floor Becky Ryan was doing her magic at the Trellian booth and along came Brandy Shapiro-Babin of WebmasterRadio.FM. We hope Daron gets better ASAP. 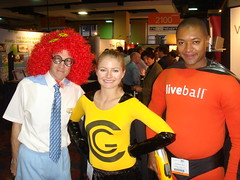 While ad:tech is notorious for booth babes, this NYC event had some more colorful characters. 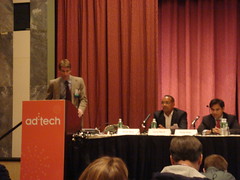 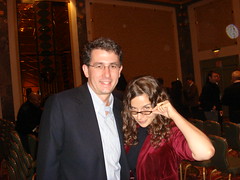 After the session the scholarly looking Sara Houlebeck said hello along with Jay Sears of ContextWeb. You can find more photos at the ad:tech NYC Flickr Set. You can also find daily blog coverage on the official ad:tech blog where I’ll be posting tomorrow.