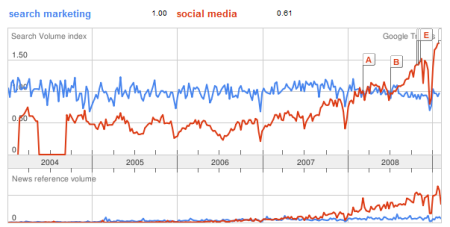 Social media is hot, just take a look at Google Trends to see the comparison between topics like “search marketing” being eclipsed by “social media” in terms of search volume and news references – at least according to Google. Along with all that “hotness”, there’s good and bad when it comes to the way companies are beginning to engage social media channels. 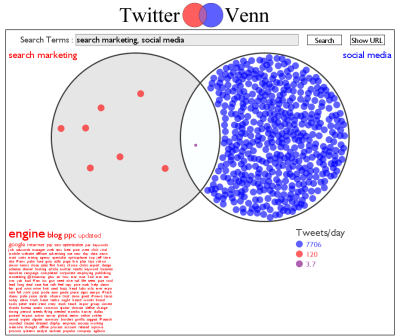 On Twitter, the difference between mentions of  “search marketing” and “social media” are even more pronounced. Of course this is by no means a formal assessement, but it gives you an idea of what people on the web are paying attention to and in some cases, what they expect.

Most people learn about new things in terms of what they already know. Any number of companies have taken this approach to heart and entered the social media world oblivious to the formal and unwritten community rules and treating social channels simply as another dumping ground for current advertising assets.  Don’t get me wrong, there’s some amazing digital creative that’s being produced (TV commercials and ads) that are well received on sites like YouTube, Digg and StumbleUpon.

But for the most part, many marketers are not exactly sure about the difference between best and worst practices when it comes to participation with the social web where intentions are commercially motivated. Identifying best and worst practics is a work in progress of course, as communities develop, grow and change.  It’s best to start out with the basics that will hold true regardless of these changes:

Update 07/2009 thanks to Hillary Danni Davis

Actively listening and building relationships with communities is a full-time job. Also, its imperative to ensure community managers have the skill sets needed to articulate their objectives for social media in addition to utilizing tools that will resonate with their audience.

CEOs that ultimately give the green light to pursue social media marketing are concerned with the bottom line. Its essential that a social media strategy includes mechanisms to assess business value. It might be a value placed on increased product awareness, solid sales leads or cost savings due to a reduction in support staff due to social media tools. ROI is easier to obtain if there is a stated goal for the social media campaign. Regardless of how value is determined, social media needs to be validated as a profitable marketing channel.

Learning from companies what they think of social media as a topic and opportunity over the past few years has been enlightening.  Our digital marketing and public relations agency gets to talk to a substantial number of companies each month that need help making sense of where social media might fit within overall marketing and PR efforts. Those conversations vary, but an increasing number of client side marketers clearly aware of the social media marketing fundamentals.

In those cases, companies simply want help from someone that has the experience to guide them in creating a social media strategy, specific supporting tactics and dealing with measurement issues. Other companies really have no idea how to proceed and need a focus on education and an audit that will help them create a social media roadmap before getting into specific programs.

What’s encouraging is that more companies are looking more seriously at the challenges and opportunities of social media participation. Others understand that social media is not a destination, but rather an indication of consumer behaviors aided by technology. Successful social media marketing isn’t about the tools, it’s about the people.

If nothing else, remember that social media is about the C’s:  Conversation, Connections, Community, Consumer, Control, Creative, Collaboration and Content.  Do: listen, be transparent about your intentions, “Give to Get” and have a plan. Don’t: Be fake, interruptive and focus only on short term sales.

Need more data on justifying social media marketing in your organization? Check out the new report from Marketing Sherpa: “What Works and What Doesn’t in Social Media Marketing and PR“.