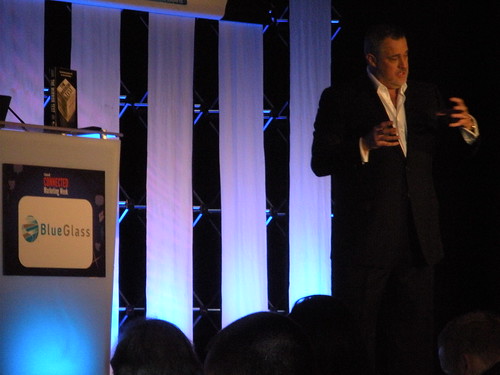 How exactly does one become a celebrity CMO?  Jeffrey W. Hayzlett, former CMO of Eastman Kodak Company showed us as he robustly (and at times, profanely) opened the 2010 Search Engine Strategies conference in San Francisco, CA.

A crowd of thousands, waiting in anticipation after being detained in a lobby holding area for twenty merciless minutes with only designer coffee for sustenance, were eased into the presentation via an excellent introduction by Mike Grehan.

In the conference’s opening remarks, Grehan asked a question that has likely only been asked by most of us in hushed, frightened whispers, “Why do I deserve to rank #1 in Google?”  It’s a difficult question to answer or even to come to terms with.  It’s also a question that each one of us will keep firmly in mind throughout the conference.

With that, Grehan introduced the ‘Chuck Norris of Marketing’ (per German bloggers), Jeffrey Hayzlett.

“From 15 billion to 200 million in film sales when compared against five years ago.”

As Bukowski said, the power is in the line.  This particular line defined what could have been the dying breath of Kodak – a once great connector of people.

But if Kodak were to die, it would go down proudly.  Each employee was passionate  – deeply – about the company being a seller of film.  And why not?  Film has helped bring us everything from Kodak moments to the Carousel.  But just as one’s love for antiques will likely not lead to the cutting edge, passion for antiquation will likely not result in growth.

In making the antique analogy (mine, not Hayzlett’s), let’s not make the mistake of confusing an antiquated product with a deeply set core offering.  For Kodak, the core of what they offered was a mood that made people smile.  Film was simply a mechanism.

What Kodak offers is custom built for search marketing and social media.  From keywords and phrases like ‘kodak moment’ that can connect us online in eight seconds, to social communities where users can share the images that make up their lives, Kodak should have been at the forefront of connected marketing.

But until recently, the company was dreadfully behind the times.  It sold film.

Hayzlett stepped in and moved the company out of its comfort zone and gave it the freedom to make mistakes, especially in venturing into social channels.  It hired a Chief Listening Officer to listen to customers in social channels and route them to the appropriate department.  It drove home its emotional technology offering in these same social channels, realizing that numbers of eyes and ears paled in comparison to hearts and minds. And in doing it all, it understood that Return on Ignoring is far more difficult to prove – and far more deadly – than Return on Investment.

Hayzlett’s vision has helped Kodak become one of the most successful companies online, with both its web properties and within social channels, and the lessons it learned can be taken to heart by nearly any company.

Do you sell software, or are you an architect of the efficient workday?

Do you rent cars, or do you lend an image?

Do you sell reclining chairs, or are you protecting the backs that continue to build America?

Your core emotional offering is what will help you connect, whether it’s in deciding the right keywords to use on your website, or when building a foundation for an online community.

It’s only in retrospect that Kodak seems like one of the original search marketing and social media behemoths.  Five years ago, they sold film.

And with that, SES San Francisco is off.

Check back all this week for live coverage from either myself or TopRank Account Manager Adam Singer.

If you’re here on site, come say hi.  I’ll be the nervous looking individual looking desperately for a power outlet.