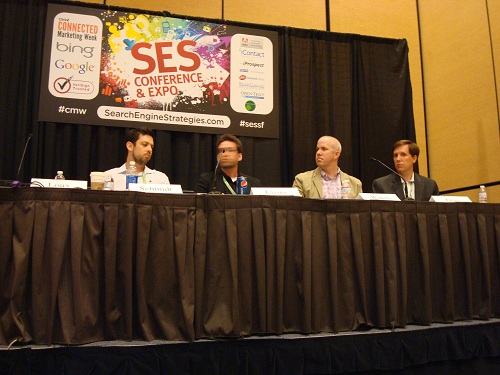 For mainstream media to survive, if not thrive, it must integrate with the social web and create engagement surrounding content.  For social media to remain relevant and compelling, it must work in tandem with news organizations to create a symbiotic storytelling relationship.

The future may be a stream with the authenticity of the social web and the reach of mainstream media.

Moderator:  what is a brief definition of real-time storytelling?

Lyons:  Real-time story telling is disrupting the idea of an editorial filter.

Waters:  Real-time storytelling isn’t any different than it was 30 years ago; it has just become a participatory conversation as opposed to being broadcast.

Gray:  Real-time storytelling gets to find the most accurate, relevant content and floating that to the top.

Moderator:  how do you as a publisher ride the wave of citizen journalism?

Waters:  At CNN, we encourage everyone to be a part of the news and citizen journalism.  Join iReport and you can be a part of the wave.   What we have discovered is that we were dropping 97% of citizen content sent to us without publishing.  That was the inspiration to create iReport, take that content and reuse it in a number of different ways.  We’ve spread that philosophy throughout our site and to the rest of our properties.  Over time, we’ve built a tremendous network around the web of users reporting the news.

Waters:  Overwhelming we haven’t seen this, we’ve seen it be mostly real stories, real conversations.  It is a testament to the community.  Further, the iReport community is tightly knit and will react to fake content.

Moderator:  how do you moderate/manage real-time conversation without squashing it?

Waters:  I think the community is who will manage that – you can’t stifle conversations or even allow real-time if you’re manually filtering it.

Moderator:  in a world with untold number of news resources, replies/comments/ReTweets, how can curation help?

Dan Schmidt:  People are using their friends as curators.  This is becoming more and more powerful as sites recognize users identities.  An opportunity for a news organization is to help people build their own network.  Users can bring that filter with them wherever they go.

Gray:  You talk about curation – I think CNN and CBS have grown their brand due to authority as a brand.  The act of aggregation and curation today is the act of finding relevant info from a third party source and sharing it with readers.

Dan Schmidt:  We thought about piping in feeds of content into our site – but we decided to introduce an editor to provide context.  In theory, being clear about the relevance of content is important.

Gray.  We’ve seen a battle between traditional media and new media aggregators.  What is the feeling from a CNN or CNet on other aggregators who are taking readers away or using your content to build your brand.

Waters:  Aggregators are a way to get those eyeballs.  We want to work with them not against them to ensure we are relevant and reach users.

Moderator:  there is no longer an opportunity to research stories and be “accurate,” now there is a push for publishers to be first.

Lyons:  The luxury of the deadline is gone.  You now have to be prepared to embrace the real-time world we’re in or be prepared to fight it.  For example, the journalists out there focusing on a specific be used to be thought of as the expert.  Now everyone has a voice – not just the journalists.  Subject matter experts such as scientists or other vertical-specific experts can be even more authoritative.  There has become a “return on integrity” – where you can build relationships with influencers in order to utilize them for information.

Gray:  You’ll find that some users actually have a fatigue about “breaking news.”  What you’ll find is not all of it is breaking.  You also will find a “half life” of a story – that if a newspaper is dead by the time it gets to someone (24 hours) – at what point does a news items actually become old?

Waters:  When does a story become old?  It depends on the consumer, because it might be new to them (it’s interesting/relevant to them, they just haven’t seen it yet).

Gray:  What’s happening is you now have the ability of citizen journalists to create content.  With this, specific individuals have influence within different sub-sets of technology.  There are many citizen-fed blogs in the tech space, as one example.  And a lot of the smaller blogs cover the same story.  For example, Twitter announces a feature, they put it on their blog and then 500+ other bloggers will write their own spin.  Many reasons people do this is to keep users on their page and position themselves as the arbiter of truth.  Why are you choosing to read Gizmodo over Engadget?  Usually the answer is because they have access to something or a certain editorial perspective compelling to you.  So, based on personal preferences users will read items that reinforce their choices.  Now we have this issue, the truth used to be arbited by big names who had the access to real, verifiable facts.

Moderator:  it seems like the truth is being stressed to infinity and a race to break what is news.  It’s de-valuating investigative news that takes time to create.  What do you think?

Gray:  In terms of truth, the way that we solve that is figure out a way to reward the truth discovering machine.  You need to rely on the bigger organizations who can put reporters out in the field.  Are these individuals rewarded for what they’ve done or not?  What we’re finding is that people will break news ahead of embargos and push the limit on real-time to get on top of aggregators and attain pageviews.

Moderator:  with real-time storytelling, how will content publishers monetizing it?

Waters:  There are many ways you can make revenue from it.  By fostering the conversation and encouraging users to come to the site for real-time comments, you’re encouraging more people to your site and raising your brand awareness.  When talking about conversations offsite, we can re-aggregate it and monetize it in our own spaces.