With SES Chicago over, we’re picking up our Wednesday guest posts again. This time with my friend David Meerman Scott, best-selling author of numerous books including The New Rules of Marketing & PR, Real-Time Marketing & PR and a new book called Newsjacking (Wiley) created specifically for the Amazon Kindle. David is someone who has always been a forward thinker and a few steps ahead of most marketers. This post gives some perspective and an example of newsjacking that opportunistic marketers are increasingly tapping in to due to availability of trend, buzz and social stream monitoring tools.

With Google now indexing new content in real-time, there is a tremendous opportunity for clever people to rank at the top of the results for emerging keywords. One great way to accomplish this is to engage in what I call newsjacking.

To some newsjacking may sound like a black hat technique but it is perfectly appropriate when done ethically. I wrote about the ideas in my brand new book Newsjacking: How to Inject your Ideas into a Breaking News Story and Generate Tons of Media Coverage.  Newsjacking is a quick read (most people tell me they finish in about an hour) and is published in electronic-only format for Kindle, Android, Nook, iPad, and the like.

The Newsjacker’s Goal: Own the Second Paragraph

As journalists scramble to cover breaking news, the basic facts—who/what/when/where—are often fairly easy to find, either on a corporate website or in competitors’ copy. That’s what goes in the first paragraph of any news story.

The challenge for reporters is to get the “why” and the implications of the event. Why is the company closing its plant? The corporate website may offer some bogus excuse like “because it wants to spend more time with its family.” Competitors may quote some expert’s speculation on the real reason, but a reporter can’t cite that without adding something self-demeaning like “according to an expert quoted in the New York Times.” Journalists need original content—and fast.

If you are clever enough to react to breaking news very quickly, providing credible second-paragraph content in a blog post, tweet, or media alert that features the keyword of the moment, you may be rewarded with a bonanza of media attention. 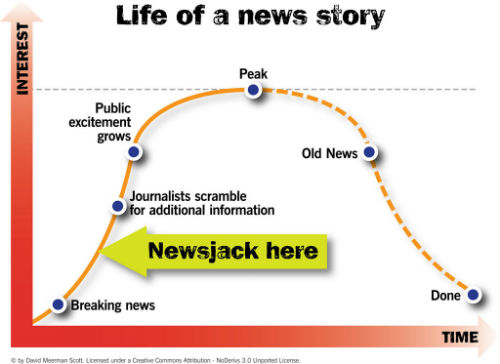 If there is one organization we all count on for a quick reaction, it’s the fire department. So it is encouraging to find that the London Fire Brigade (LFB) is able to newsjack at lightning speed.

Sir Richard Branson was hosting actress Kate Winslet and 20 other guests at his private Necker Island retreat in the British Virgin Islands on August 22, 2011, when lightning struck the wooden building and set it ablaze. Winslet helped rescue Branson’s 90-year-old mother from the inferno.

News of the rescue, along with photos of the dramatic fire, quickly became the lead story in media worldwide. But the story was thin, few outlets had an original angle on it, and no one had reporters in the British Virgin Islands. For editors in the ferociously competitive UK media, situations like this are hideously stressful. So imagine their collective relief when the local fire brigade showed up to the rescue. Within hours of the initial reports on the fire and Winslet’s role in the rescue, the LFB offered Winslet the chance to train with firefighters at its training center. The offer was made in a story written by the LFB and posted on its website: LFB

This clever newsjack got the LFB huge attention, as the offer to Winslet was featured by news outlets worldwide.

What the LFB did—quickly posting the Winslet offer on their site and alerting reporters—took no more than a few hours and probably cost nothing. But the resulting media exposure was worth millions. It was a gambit that succeeded because the timing and the message were perfect. It also got LFB ranked highly when people search on the fire.

You can newsjack, too. Today’s tools such as blogs and YouTube videos gives us the ability to communicate instantly, yet most marketers have not developed the communication skills to address real time. Marketers have been trained with a campaign mentality, spending weeks planning, designing and executing in a sequential manner.

Social marketing is changing that and as people see the value of newsjacking, I hope we change quickly. We now have the ability to react instantly to breaking news. Marketers need a new mentality, infrastructure and workflows to meaningfully participate in real time.