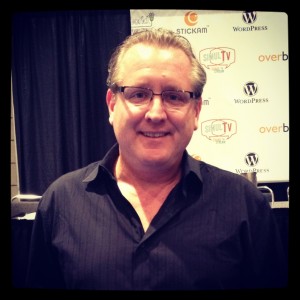 ROI, it’s a term we’ve all heard.  Typically this acronym stands for Return On Investment, but in this case we’re referring to Return On Influence.  Mark Schaefer (@markwschaefer) presented at BlogWolrd (on his birthday) on some of the key concepts in his new book Return on Influence: The New Rules of Creating and Leveraging Power on the Social Web.

At the very beginning of his presentation Mark made an interesting observation.  In the past a speakers audience was a group of people who passively sat in the auditorium and listened to what the speaker was saying. Mark Schaefer shares “Now, I am talking to an audience of audiences.”  What does that mean?  Not only are the bloggers in the room soaking up with is being shared but they are also sharing this information with their audience, in real time.  What did this session teach me about Klout, content, and creating more influence online?

Love it or hate it, Klout impacted social scoring.  When it was first released Mark Schaefer realized that there was an opportunity to write about this new concept because love it or hate it, people were talking about it.  Within a short time of writing his post Mark began to receive an outpouring of passionate responses from followers.

This intersection of personal loathing and business opportunity that made him think that social influence might be a good topic for a book. Three weeks after writing the post he got a call from reporter at New York Times.  What followed was a whirlwind of quotes and interviews for many famous media outlets all over the globe.  All this while he was thinking, I’m just a normal guy…how did this happen?

Inspiration for Return on Influence

Robert Cialdini discusses the 6 Weapons of Influence in his book on the science of influence.  These 6 “weapons” are:

In the online world, it is not always that simple.  We don’t have a lot of time to figure out who people are and what their experience is.  Where is this going?  Ah yes, the impact of social badges.  These badges let you know who might fit in your influence marketing program: who has created influence online and which topics they are considered to be an “expert” on.

Content that moves is power. Anyone has the opportunity to create influence and power through their content.

How to Begin Quantifying & Measuring Influence

Content that moves is a source of power.  You can measure how it moves and how people react.  While you cannot measure all influence, platforms like Klout begin to measure influence and show that you are someone that can create content that gets a reaction.

What are these social scoring sites looking for?

Tips for Being a Better Influencer

Below is a combination of tips from Mark’s presentation as well as some general best practices for becoming a better influencer.