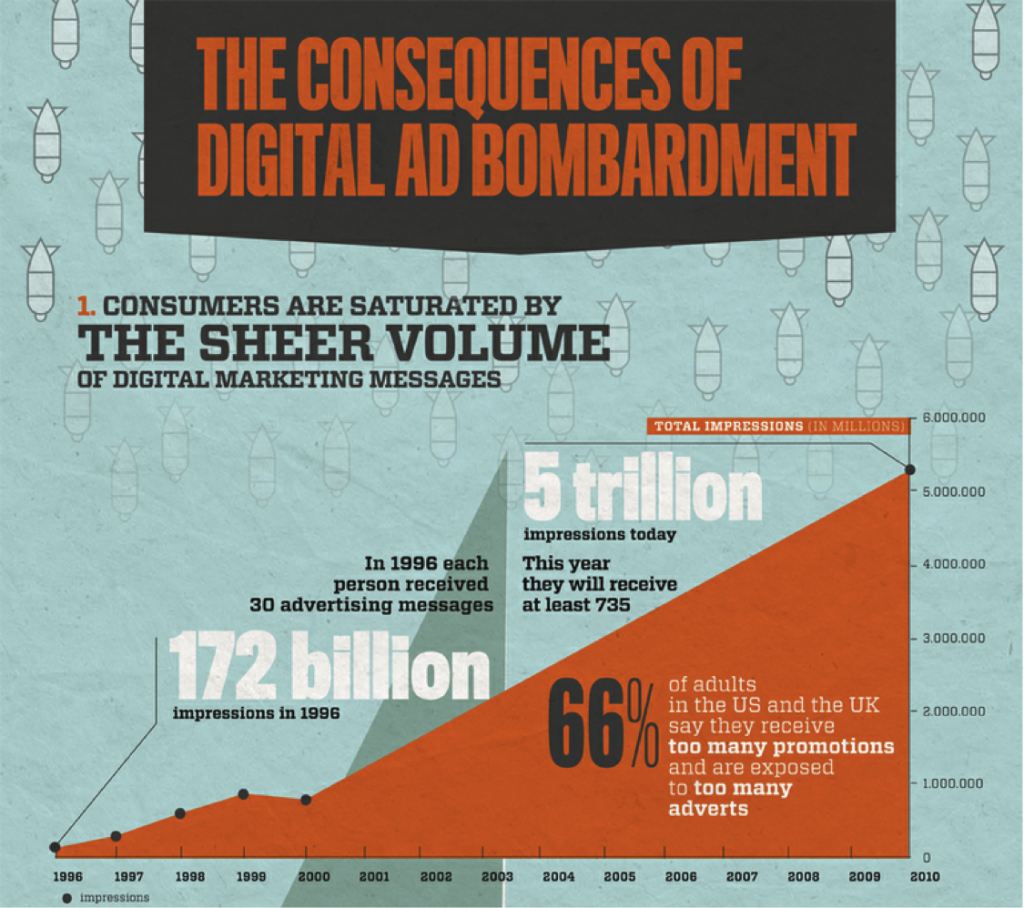 The Consequences of Digital Ad Bombardment

This infographic from upstream addresses the dangers over overloading customers with too many ads.  Highlights include:

This Week In Online Marketing News 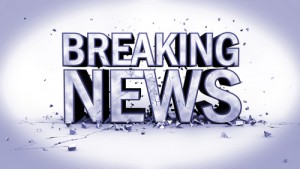 Don’t Like the AdWords Display Ads You’re Seeing?
Google is making it possible for users to now dismiss or mute paid ads appearing in their browser.  Google says that this new feature will allow them to deliver more relevant ads to consumers.  Once a particular ad is muted, it will not appear in your stream again.  Read on to learn more.  Via Search Engine Land.

GM Said to Be in Talks With Facebook About Resuming Ads
General Motors Co. (GM) (GM), which said it would stop advertising on Facebook Inc. (FB) (FB) on the eve of the social network’s initial public offering in May, is talking with the site about resuming the ads, two people familiar with the talks said.  Via BusinessWeek.

4 Pillars of Successful Brand Building
This article from HootSuite CEO Ryan Holmes sheds some light onto the tricky task of branding your company in a way that will be remembered by your audience.  One great piece of advice given by Holmes in the article is “Don’t be scared to try new things, but remember to hold on to the vision of your company and the initial successes that defined your brand.”  Via Fast Company.

How LinkedIn Gets TWENTY Times More Money Per User Than Facebook
The group which develops LinkedIn’s amazing money-making products is called “Team Money” inside the company.  LinkedIn is on track to gross $895 Million and net $70 Million, up 71% and 100% respectively from 2011.  Via Forbes.

Study: 80% of companies are on Facebook, but many are not making the most of it.
Eight out of 10 U.S. companies are present on Facebook, 48 percent are on LinkedIn, 45 percent are on Twitter and 31 percent use YouTube but many might not be employing effective strategies to get the most out of social media, while others lack the commitment required to make the undertaking pay off.  Via The Salt Lake Tribune.

Pinterest Users Ready to Engage With, Purchase From Retailers
Pinterest users outdo Facebook users when it comes to the number of companies they follow and the likelihood of purchasing an item they see on their respective sites, according to a joint study between Shop.org, comScore and the Partnering Group. Facebook is more for sharing, but Pinterest leads to more purchases.  Via Marketing Charts.

Marketers Challenged to Keep Pace with Mobile, Social
IBM’s May 2012 survey of marketing professionals worldwide, “The State of Marketing 2012″ reveals that the fracturing of the media landscape has made it increasingly difficult for marketers to reach customers in large numbers. To stay in front of customers, marketers are jumping into mobile and owned media such as social networks and microblogging.  Via eMarketer. 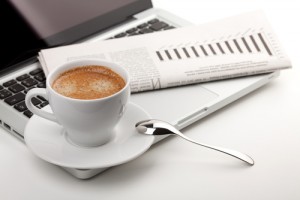 Brian Larson – How to Leverage Facebook’s New ‘Promoted Posts’ Feature
While Facebook may still be playing catch up in terms of demonstrating a strong ROI for their ads from a pure lead generation standpoint, the social media leader has made some waves with ‘sponsored’ content form of advertising. The latest ad type in Facebook is ‘Promoted Posts’, which allows brands to pay to have a post appear in their fans news feeds. Learn more about how this new feature works and how you can leverage it for additional exposure in this post from Social Media Examiner.

Alexis Hall – YouTube and Google+ Grow Closer: All Users Can Now Switch Their Usernames to Their Google+ Profiles
As of the end of last week, YouTube now gives existing users the option to use their Google+ identity (including their real name) within YouTube, rather than their current handle. This change reflects the continued integration of Google properties, as well as a growing connection between your web identity and real life identity.  Via TechCrunch.

Jolina Pettice – How to Identify a Link Profile Susceptible to Google Penguin
Pandas and Penguins have become enough a part of an SEO conversation, we could be mistaken for a zookeeper with some angry animals.  Read this article to understand some quick and easy ways to assess your link profile and understand what Google is looking for, good and bad.  Via Search Engine Watch.

Kodi Osmond – Google’s Knowledge Graph and SEO: Search Gets Smarter
Google recently released its Knowledge Graph update, which brings them in to the semantic search arena.  With such a change, can it be said that Google is getting smarter?  And how do these changes affect SEO? Via MarketingProfs.

Shawna Kenyon – Are Tailored Trends Ruining Twitter?
Twitter unveiled Tailored Trends just over a month ago, which is a recalibration of old Twitter trend algorithms designed to tailor to the user based on location and ‘Follow’ base. Users may notice their homepage trend list saying more about them then they do while Tweeting.  This change will make Twitter a much more local activity since it now filters by location and shields users from things they don’t care about based on who they follow.  To learn how this is effecting your Twitter experience be sure to check out this article.  Via Mashable.

Time to Weigh In: Do you know how much of your website traffic comes from paid advertisement and do you think that the new AdWords features will significantly affect this number?  According to a recent study more purchases are made from engagement on Pinterest vs. Facebook why do you think that is?  What is your take on Facebook’s new “promoted posts” and will it change your social strategy?