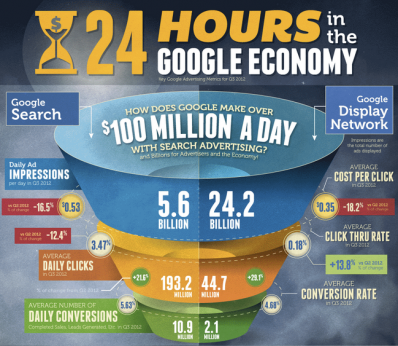 24 Hours in the Google Economy

This recent infographic from WordStream takes a deep dive into just how much revenue is generated on Google in 24 hours.  The infographic covers the following industries:

Confirmed: Google Moving Search Options Above Results
The time for testing has passed.  Google  has just confirmed that searchers will soon be viewing the new interface which shows Google search options above results instead of on the left of the browser window.  This article also provides a preview of how these results will display in Google.  Via Search Engine Land.

Killing Rumors With Facts:  No, Facebook Didn’t Decrease Page Feed Reach To Sell More Promoted Posts
Business users have been up in arms about Facebook’s recent change which controls the number of audience members who are exposed to Page posts.  Many have believed that this was Facebook’s attempt to force companies into purchasing more promoted posts.  According to Facebook, this is not the case.  Via TechCrunch.

Instagram Had A Big Election Night Too, Photo Uploads Climbed To 2.1x Normal Rate
Within moments of the announcement that Obama would remain president for another term, Instagram photo uploads spike to 2.1 times the normal rate.  People within the U.S. tagged more than 100,000 photos with #IVoted, and 150,000 photos with #election2012.  Read on to find out more.  Via VentureBeat.

Possible Twitter Hack Prompts Big Password Reset Call
Many users have received messages from Twitter prompting that they reset their password.  Even accounts like @TechCrunch were hacked and began sending out spammy messages to followers.  Twitter is taking strides to rectify the situation and may require that you provide one of three pieces of information such as your phone number, email address or Twitter handle.   Via Mashable.

Jolina Pettice – Candy Finds a Sweet Home with Facebook
Facebook is the social media platform of choice for many candy companies.  Who’s getting the most engagement? M&M’s with Reese’s as a close second.  Via Clickz.

Mike Odden – How to Create Custom YouTube Thumbnails
Do you ever feel like the random YouTube thumbnail shown does not represent your video in the way that you would like?  YouTube has rolled out an option that allows user to select the image that they would like to use for their video thumbnail.  YouTube measures the CTR of your videos, so chances are if people click on your thumbnail because it is enticing, you will see a bump in ratings.  Via Social Media Examiner.

Evan Prokop – Google Penguin, What Lurks Beneath the Surface?
Most webmasters know that Google Penguin caused quite a stir when it rolled out, but what are the lasting effects now that the dust has settled?  In many ways, the real target was not spam, but spammers themselves and the outdated and dangerous shortcust that are too often passed off as SEO.  Via Search Engine Watch.

Brian Larson – Are Your Web Properties Working Together?
Many SMB marketers are discovering what LEs have known for a while: it’s one thing to develop and maintain multiple domains…and a completely other thing to track and measure their cumulative effectiveness. Benjamin Vigneron of Search Engine Land shares some helpful tips and best practices for those looking to better understand how multiple web properties are contributing to common objectives.  Via Search Engine Land.

In Other TopRank News

SES Chicago is just around the corner and 5 of TopRank’s team members will be out in full force live blogging, speaking, moderating sessions, tweeting, and getting to know other attendees.  We hope you’ll join us for an exciting 3 days filled with education and how to’s from some of the industry’s top professionals.  For more information check out this post from Alexis Hall: TopRank Heads to the Windy City for SES Chicago – #SESCHI

Time to Weigh In: Were you one of the unlucky Twitter users that got hacked?  What do you think of Google’s choice to re-arrange search results?  How much of an impact do you think YouTube’s new thumbnail feature will have on your video strategy?