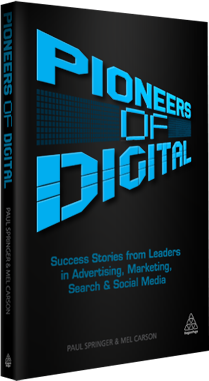 Today’s post is like a virtual reunion with two people I have known in the search marketing industry for a long time that are also authors: Vanessa Fox formerly of Google wrote Marketing in the Age of Google, and Mel Carson formerly of Microsoft has co-authored a new book, Pioneers of Digital.

When writing this book about success stories from leaders in advertising, marketing, search and social media, Mel asked me for a quote about Vanessa’s contributions to the search marketing world. I easily obliged. I’ve had a chance to read through a preview copy of Pioneers of Digital and there are an impressive mix of lessons to be learned within. Rather than doing a regular book review, Mel agreed to share an excerpt from the book so I can share it with you.

This book is about a lot more than search of course, with profiles that range from Alex Bogusky to Stephen Fry. Take a peek at this preview about search marketing pioneer, Vanessa Fox:

We interviewed 20 amazing digital entrepreneurs for our book and all of them, somewhere in their career, have shown the importance of marrying the needs of a business with that of its audience and customers.

In Vanessa Fox’s case, it was Google and the hopes and fears of an entire industry. Her story is one of an uphill battle to break down the barriers of cynicism and secrecy to provide webmasters with the information, tools and sense of community they needed to create great experiences for their site’s visitors, and also about Google who were desperate for the data it needed to keep ploughing ahead as the world’s most significant database of intent.

In this excerpt from the chapter on Vanessa Fox in our book, we talk about the sitemaps project that would become Google Webmaster Tools and what Fox had to do to start marrying Google to the webmaster community in a beautiful and useful way…. 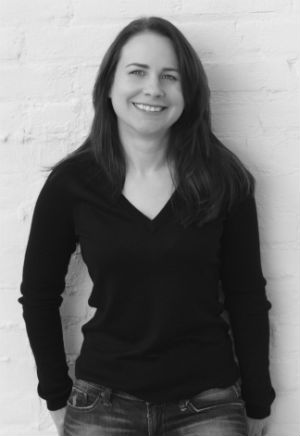 Working out of Google’s new and small Kirkland office was a strange gig, as everything and pretty much everyone were in Mountain View at the time.

Fox was asked to work on a number of developer projects that weren’t really ready to launch, although she did work on a few items such as the API (Application Programming Interface) protocol for Google Talk.

The Kirkland office was run by Shiva Shivakumar, whom Fox describes as a visionary engineering director: ‘He wanted the Kirkland office to come up with new innovative things that were totally different and really change the way people thought about things.’

One of his ideas was the initial ‘Sitemaps’ project and he asked Fox to start working on it. Sitemaps involved reimagining how Google could work with website creators to submit their sites to their index. Little did Fox realize at the time that this project would be just the beginning of a fundamental shift in the way internet search engines worked with site owners.

Until this point Google had been so successful because its raft of smart engineers had built technologies that ‘crawled’ the web quickly, indexing billions of website pages and presenting relevant search results every time a searcher typed in keywords to their search box.

But the driving factors behind Google’s popularity were relevancy and speed of search results, and it cost money for all those servers and crawlers to be up and running, generating so many connections between consumers and website owners. This is where the Sitemaps project came in. Instead of Google just coming to the website and hoping to find everything, the website owners could submit their sitemap – literally a list of all the pages on their site and how they interconnected – which would connect the dots and ensure that the Google crawlers had a comprehensive list of what the site owner wanted indexed.

Shiva blogged in June 2005: ‘It’s a beta “ecosystem” that may help webmasters with two current challenges: keeping Google informed about all of your new web pages or updates, and increasing the coverage of your web pages in the Google index.’

Fox is very philosophical about how the idea developed: ‘…but this is very common, right? This is what happens. You iterate and you change. His idea was to do the opposite of what people expected. People could just submit a list of URLs. Done! Let’s shake things up and see what happens.’

Help me help you

So Fox started to shake things up: ‘I could already see that there were tons of other things we really should be doing.’ She talked to site owners at search conferences and realized that Google had all kinds of useful information that could help them create better websites for their (and Google’s) audiences. She travelled to Mountain View a lot, talked to engineers from all parts of Google and started asking them what information they needed from site owners to make their jobs easier. Her approach was to ask Google’s engineers how she could help them.

So many people in Fox’s position would have embarked on a project like this with a ‘help me’ attitude but she knew she had to kick it off by saying ‘help me help you’. She was a nobody from the Kirkland office, she had no computer science degree and she was touting a project nobody knew or cared about. She had to find a positive reason for other teams to collaborate with her.

One person she ended up collaborating with most was Matt Cutts, then, and now, head of Google’s web spam team. Cutts had made a name for himself at conferences and in online marketing internet forums as a spokesman for Google on what webmasters shouldn’t be doing – how they might be contravening Google’s guidelines and run the risk of getting banned from their search results. Given Google’s reach and ubiquity, this was enough to give any website owner sleepless nights and so people would hang off Cutts’ every word.

Even with Cutts’ support, Fox still needed to get some full-time help, so she started making friends with new Google employees to generate interest in the project….

Now back to Mel:

The book ends with a chapter outlining the ten entrepreneurial trends we gleaned from talking with each Pioneer. We wanted the book to be inspirational but also actionable, and what we uncovered was fascinating.

For instance, there was a heavy emphasis from most on NOT having to be original in your thinking. Pivoting swiftly around an established product or strategy could pay many more dividends than starting from scratch, and many of our interviewees had got lost in the notion that their way forward needed to be brand new.

In the Vanessa Fox chapter, the spotlight shines on her understanding that utility is often the best way to people’s hearts.

When you create something useful and there is some kind of value exchange that addresses a need, then your community will trust you have their best interests at heart.

Being authentic and transparent in your communication is also crucial to success. At the end of the chapter, Google’s Matt Cutts pays tribute to Fox’s innate ability to communicate:

“Vanessa always had an outstanding ability to bridge the world inside Google with the world outside Google. She could dive into deep technical details with engineers, and then translate those technical details into plain language for regular people. Likewise, Vanessa took comments and feedback from the webmaster community and made sure that the right people at Google heard that feedback. Vanessa was always a pioneer in terms of pushing Google to be more transparent and to surface useful data to site owners.”

We were thrilled that Vanessa agreed to be profiled in the book. Hers is an enduring story from which we can all learn about how to create experiences that are useful and that turn information into action. 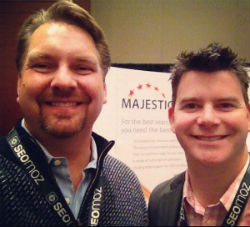 You can get a copy of Pioneers of Digital: Success Stories from Leaders in Advertising, Marketing Search and Social Media on Amazon in print and for Kindle.

Mel Carson is founder of Seattle based digital consultancy Delightful Communications  and his co-author Professor Paul Springer  is Head of Research at Buckinghamshire New University in the UK.