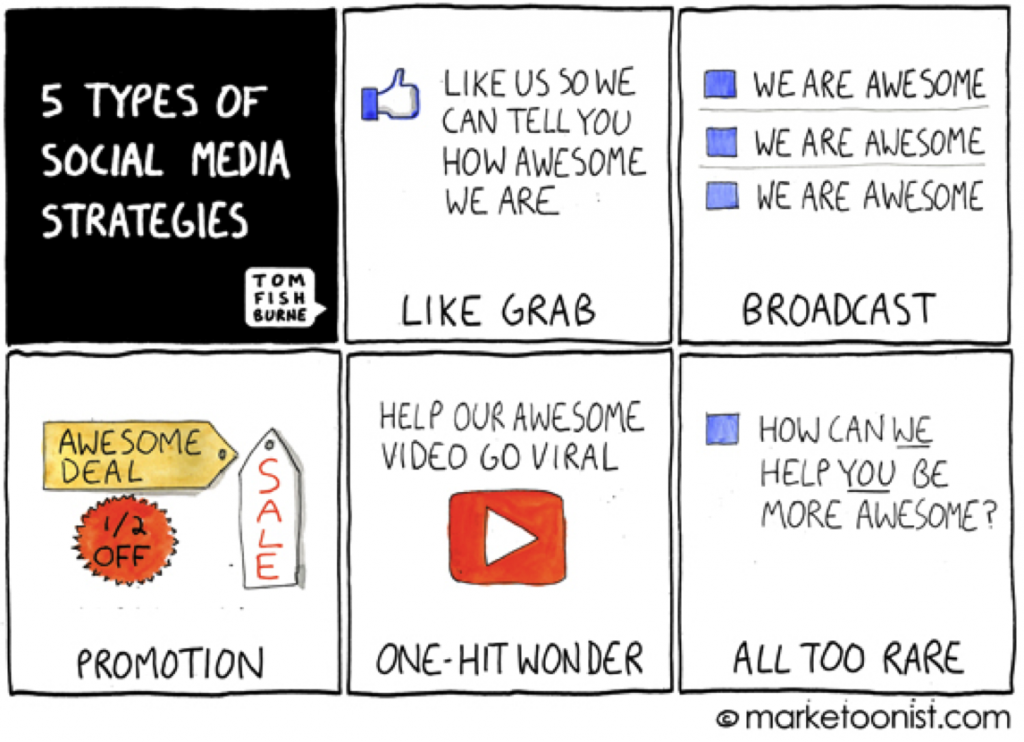 5 Types of Social Media Strategies
Social media is not a magic bullet. It’s an enabler. Social media won’t make an antisocial brand suddenly social. But it can facilitate and amplify the role that brands play with their audiences.

Whether in social media or any other domain, we need to focus less on how “awesome” we are and more on working toward making our customer’s more “awesome”.  Via Marketoonist.

There’s No Avoiding Google+
In order to compete with social networking giant Facebook, Google+ has begun requiring that people that use their services are also set up with a public Google+ page that anyone can view.  Via The Wall Street Journal.

Facebook Is No. 1 Social Network In 127 Countries, Study Finds
According to a recent study by Vincenzo Cosenza Facebook is ruling the web in 127 of the 137 countries that he analyzed.  Since June Facebook has added Armenia, Kyrgyzstand, Latvia and Vietnam.  Via Los Angeles Times.

Google Agrees to Change Its Business Practices to Resolve FTC Competition
It appears that Google has agreed to amend some of their business practices to resolve FTC concerns that they would be stifling competition in markets for smart phones, tablets, and online search advertising.   Via Federal Trade Commission.

2012 U.S. Online Holiday Spending Grows 14% vs. Year Ago To $42.3 Billion
Not on was holiday spending up 14% in 2012 but the latter part of the season saw several days with very strong growth including Free Shipping Day and Christmas Day.  Via ComScore.

Top 10 Heads of State, By Number of Twitter Followers
A study by The Digital Policy Council found that as of December 2012, 75%  (or 3 out of 4) heads of state are Twitter users.  The study also finds that a total of 123 world leaders out of 164 countries have Twitter accounts setup in their personal name.  Via SmartPlanet.

2012 Top Search Terms (by Category) & Top Websites
It’s official, “facebook” is still the most popular search tearm on the Internet for the fourth year in a row.  Interestingly, four different variations of the word “facebook” were also n the top ten search terms for the year.  Via MarketingProfs.

Record Breaking 1.76 Billion App Downloads Over Holidays
From December 25th to December 31st there were over 1.7 billion apps downloaded.  According to the study, U.S. consumers were found to be the biggest downloaders of apps during that time period.  Via Search Engine Watch.

94% of Google Penguin Victims Did Not Fully Recover
A poll from SEO Roundtable found that of the 64% of websites hit by the Penguin 81% report that they have had no recovery while 13% have experienced a partial recovery.  Via SEO Roundtable.

Time to Weigh In:  Do you think Google should be forced to adapt their online strategy so as not to squeeze out the competition?  Did you stumble across any new apps during this holiday season?  If so, what were they?  Do you think that those affected by Penguin should be taking a more proactive approach to change their site structure?