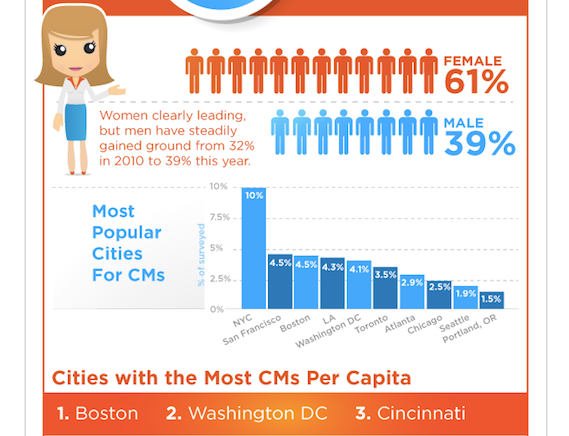 Women still hold the majority of Community Manager positions, although men are making gains, accounting for 39% across the U.S. This is a marked move towards gender neutrality compared to 2010, when just 31% of Community Managers were male, according to the annual Community Manager Report from Social Fresh. Their data shows that CMs might be more mature, or at least a bit older, than the stereotype indicates: the average age of a CM was 29 in 2011, but expected to reach 32 in 2013.

Researchers also found that 4 out of 5 CMs work in-house for brands, with the remainder on the agency side. Boston, Washington D.C. and Cincinnati are hotspots for CMs, boasting the most filled positions per capita in the country. Study participants indicated they’d found the greatest community building success on Facebook, with 54% reporting the social giant was their preferred network. Twenty percent of Community Managers found the most success on Twitter, while LinkedIn followed at a distant third, preferred by just 8% of CMs. 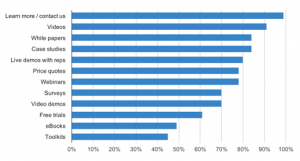 Video is a critical part of an holistic content marketing strategy for an increasing number of marketers, according to new research from SoftwareAdvice.com, with partners Eloqua and CMO.com. For their 2012 B2B Demand Generation Benchmark Survey, researchers polled 155 marketers in verticals from healthcare to telecom and beyond, in order to identify marketing priorities for 2013. Only “learn more, contact us” ranked higher than video as far as which content types or offers marketers use for lead generation. White papers, case studies, and live demos with reps are used by just slightly less marketers.

In-house email marketing is a tactic still employed by over 90% of marketers, while print, radio and television combined dropped to about half. Respondents also reported the greatest perceived quality of leads from in-house email marketing, followed closely by SEO, telemarketing and tradeshows or events. Social media falls about midway on the quality scale, yet produces the lowest cost leads by far, they report.

Facebook increased their mobile revenue from about 14% of advertising revenue to 23% in just one quarter, making the end of 2012 a big win for the social network. “In 2012, we connected over a billion people and became a mobile company,” said Mark Zuckerberg, Facebook founder and CEO. “We enter 2013 with good momentum and will continue to invest to achieve our mission and become a stronger, more valuable company.”

Marketers may be particularly interested in these stats from Facebook’s earnings report: 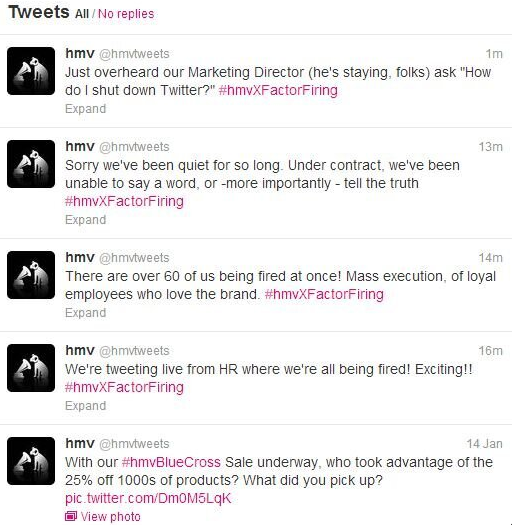 Thursday morning, bankrupt UK retailer HMV briefly lost control of their Twitter account, as a person or persons claiming to be employees in the process of being fired from the company sent out a series unflattering tweets.

“There are over 60 of us being fired at once! Mass execution, of loyal employees who love the brand,” one tweet read, with the hashtag #hmvXFactorFiring. Another (undoubtedly embarrassing for the brand) tweet declared, “Just overheard our Marketing Director (he’s staying, folks) ask, ‘How do I shut down Twitter?'”

The Marketing Director soon enlisted help in deleting the tweets almost as soon as they appeared, though most, if not all, were retweeted by at least a few users before they could be removed. And the lesson for brands is pretty cut and dried: remove access from social accounts BEFORE you fire your staff. From this day forward, may we refer to an oversight to do so and the inevitable account hijacking as “Being HMV’d.”

Yahoo! may just become a serious search marketing contender once again with Marissa Mayer at the helm. Plagued by internal problems and a revolving door on the CEO’s office, Yahoo! has seen their revenue falling each quarter over the past four years. Though the latest report shows revenue grew only slightly, from $4.98 billion in 2011 to $4.99 billion for 2012, profits were up $1.06 billion over a year ago. Quarterly search revenues grew 4% YoY, while paid ad clicks saw an increase of 11% over Q4 2011. Overall, things are looking up for Yahoo and advertisers had best keep them on the radar.

Approximately 125 million Facebook users received emails this past week notifying them of the settlement of the lawsuit against Facebook for using their names and profile pictures in Sponsored Stories ads. Forbes columnist Kashmir Hill was among those contacted and explains why she won’t be running to collect her $10 share of the windfall: in order to file a claim, users must attest under threat of penalty of perjury that they did not know Facebook received income from Sponsored Stories (among other required declarations). “I’m very curious how many of the 125 million didn’t know that Facebook was making money this way,” she writes.  Indeed.

News & Commentary from the TopRank Team

Mike Yanke: Paid Social Advertising Budgets to Increase in 2013
While traditionally free, marketers are so pleased – or banking on the growing potential – of social media that nearly 64% are planning to increase their budgets in 2013, according to Neilsen company Vizu.  While this is good news for major social networks, it’s tempered by the fact that most see their budgets increasing only nominally. A significant portion will increase their budgets by less than 20%.

Brian Larson: Facebook Creates the Ultimate Gift Card
Imagine a card that carries multiple balances. You have $60.00 for Red Lobster and $15.00 for AMC Theaters (sounds like a nice night). Well, Facebook had the vision to make that idea a reality – although don’t quote me on whether Red Lobster offers Facebook gift cards. As the social media giant strives to become even more ingrained in our daily lives, this development will only help their cause. Learn more about this ‘social gift card’ in this story from Mashable.

Rob Bayne:  Expertise & Budget Among Top Mobile Marketing Challenges
Marketers are trying to navigate significant challenges in mobile, with 55% reporting their organization lacks an effective mobile strategy. Inadequate staffing resources and expertise tops the list of barriers to mobile success, followed by insufficient budget and an inadequate understanding of the mobile user conversion path, according to MarketingSherpa’s 2012 Mobile Marketing Benchmark Report. Companies have no choice but to overcome these challenges, as consumer demand for mobile-optimized information and purchasing options increases. As we recently reported from SES Chicago, responsive design, customized messaging and clearly defined mobile KPIs/objectives are all critical to mobile marketing success.

Is your company using online video for lead generation, or is it more effective in helping you achieve other goals? Do you think Yahoo! can become a serious search contender again? And what do you think of HMV’s mass firing and account hijacking? Share your thoughts in the comments!