Nevermind Amazon’s Drones, Groupon Has Catapults – Groupon is reaching back to the days of King Arthur for its latest innovation: catapults. If you see one in 2014, don’t assume that you’re about to get hit with a flaming bale of hay or a cauldron of oil. It may just be that package you ordered. Can you say ‘newsjacking?’ Mashable

Heyday App is a Journal of Your Life That Writes Itself – This iPhone app automatically creates really nice montages of batches of photos that were taken at the same time in an attempt to record the user’s life. AllThingsD

Five Trends That Are Going to Affect Marketing in 2014 – Leveraging mobile, social and location-based approaches and powered by data and insights are required, if your brand is going to thrive in 2014. Agile marketing is now a common approach, and includes a healthy loop of building, testing, measuring, learning, refining and improving. This is a must read when creating your marketing plans for next year. Social Media Today

Survey: How Journalists View PR and Social Media – In 2013, 20% of journalists in the 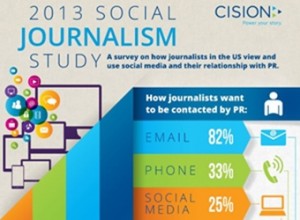 US agreed with the statement ‘Social media will lead to the death of professional journalism.’ The same sentiment is not shared around the globe. Cision Blog

Verizon Set to Purchase CDN Provider EdgeCast for $350 Million – For years, content has been pushed to the edge of networks to facilitate faster and smoother delivery. Verizon has decided that it should be in this game itself rather than depending on third parties. As the definition of online content expands, it will be critical to align with technology providers that have the same vision. Marketing Pilgrim

Study: Instagram Best Platform for Brands – SumAll, a business analytics tool, currently tracks over 100,000 businesses on social networks, analyzing over 290 billion social actions per year. According to their latest study that reviewed all brands on social with over 25 fans on each of four major social platforms, Instagram, Facebook, Twitter, and Google+, Instagram measured 3x more engagement. Venture Beat

Report: Fan Reach Drops 42% on Facebook Since August – Facebook themselves confirmed that the competition for news feed impressions has become more fierce, as an increasing amount of content is being shared. Komfo

Google+ Extends Reach Across the Web With New Social Ads – Google is launching new social ads that are composed of Google+ content and can be promoted across its display network. AdAge

SlideShare Zeitgeist 2013 – Bitcoin. Twerking. NSA. Cronuts. Google Glass. 2013 was, by all accounts, another groundbreaking year — and it was no less for SlideShare and the world of presentations, too. They take a look back at the top trends on, you guessed it, SlideShare this year. SlideShare

The 10 Best Ads of 2013 – Some great examples of creative and storytelling here, but not all those commenting agree. Adweek

Top 5 Ways to Prepare For Social Media Scandals – How can you use social media to manage concerns and better understand your customers? If you can’t answer this question, you’ll find these five tips helpful. Forbes

Google Updates Toolbar Page Rank Surprising Webmasters – Google updated the Toolbar PageRank values December 6th, despite Google’s Matt Cutts implying the update would not happen again within 2013. Then, as an afterthought, confirmed it on Twitter: “Team was fixing a different back end service and did a PR update along the way.” Search Engine Land

Why Content Marketing is Essential for Your Business – There’s no such thing as a captive audience anymore. Instead of buying or begging your way in with prospective customers, earning your way with them can turn them into much more loyal customers. Content marketing may require hard work, but it correlates directly with greater rewards. Business2Community

Node.js Is Big, And Still Getting Bigger – Chances are if you think Walmart.com or LinkedIn is running smoothly, it’s thanks to Node.js, a server-side JavaScript development framework that is currently powering everything from the biggest websites to tiny micro-controllers. Joyent expands support for the popular development framework to nearly every server and cloud base. ReadWriteWeb

Facebook Erects Supercomputers With Giant Stacks of Mac Minis – If you walk into one of the massive data centers that underpin Facebook’s ever-expanding online empire, you’ll find tens of thousands of computer servers, many of them designed by Facebook itself. But those aren’t the only machines you’ll see stacked by the dozens inside these warehouse-sized computing centers. You’ll also find Mac Minis. Facebook’s iOS app is so complex — designed to run on so many mobile devices across the world, and built with code written by so many Facebook engineers — that the company needs an enormous network of machines to test it. Wired

Google’s Ad Rank Update Leads to Improved Performance of PPC Ad Extensions – A paid search algorithm update by Google has led to an improvement in the performance of PPC adverts that include an ad extension. eConsultancy

6 Great Digital Geek Gift Ideas for 2013 – Do you have a geek in your life? Is he or she a computer enthusiast, If so, here’s the perfect list of six digital goodies for you to ponder for him or her. Only 12 shopping days left! ZDNet

10 Outrageous Social Media Predictions for 2014 – Each year, columnist Uri Bar-Joseph shares his predictions for the coming year in social media. Are we likely to see social networks enable shopping carts, the flop of the first Vine web series, or a SnapChat boom and subsequent crash? Search Engine Watch

From the Online Community

On Optimizing Convergence: How to Break Down Silos Between Marketing & PR, Barbara Mckinney said, Creating compelling content is still the most important in our campaign in 2014. It’s the easiest way to engage with our customers and stand out from other competitors.

On Mobile Content Marketing With Apps: Pros, Cons, Examples and Best Practices, James Halloran said, Mobile isn’t a platform, it’s a set of behaviors — don’t think about the devices, think about the context.”

I really like that! It’s the context to WHY people are resorting to mobile devices that we should be focusing on. Much like social media was a matter of thinking about context, mobile is no different.

If 28 percent of sales were done via mobile on Thanksgiving day alone this year, that’s a very handsome percentage that’s only going to grow in the next year. This basically means the context of the messages will change slightly due to a new medium (the device), and therefore, our strategies must adapt properly to this new context of thinking.

Thanks for sharing your research! I found it very insightful.

Do you have any online marketing predictions, social or otherwise? Are you ready to chronicle your life on Apple’s latest app? Which items are on your holiday geek (or not) wish list?