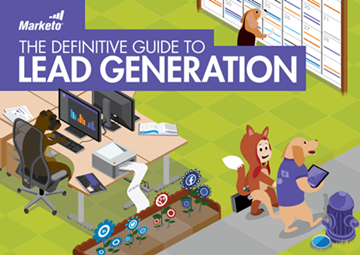 Definitive Guide to Lead Generation – Lead generation is essential for today’s marketers as they strive to create demand and get their messages heard by increasingly sophisticated, multi-channel buyers. Lead generation helps build brand awareness, nurture prospects and customers, qualify leads, and ultimately generate measurable revenue and you can learn all about it in this new 160 page eBook from Marketo

Facebook Will Now Tell You What’s Most Popular on Facebook – Facebook will now surface trending topics alongside the News Feed, using a new product the company simply calls “trending”. Trending will show a personalized list of popular topics for each user, combining their interests with content getting the most attention across the entire platform. Facebook will determine which topics are trending with an algorithm intended to recognize “a sharp increase in popularity,” not necessarily a large volume of posts or articles about a particular subject, according to a spokesperson. Mashable

Twitter Co-founder Launches New Social Search App Jelly – Jelly is designed to search the group mind of your social networks — and what goes, around comes around. You may find yourself answering questions as well as asking. Claiming to be a “new way to search,” the app can be downloaded from iTunes or Google Play. Search Engine Land

More than Half of Social Media Ads Spending Will Go to Native In-stream Ads – Native in-stream ads are the most successful type of ads in social media sites,, and will continue to find success according to a BI Intelligence study. Among all social media sites, the ones that will find natural ads most valuable are the ones that focus on photo sharing, like Pinterest, Snapchat and Instagram, the report noted. Social Media Today

Google’s $3 Billion Nest & the Internet of Things – Google’s aquisition of a company that makes smoke detectors and thermostats (smart and cleverly designed) is about the technology of course. No, you won’t get Google ads for a fire extinguisher if your house is burning down, but Google is getting in on the next big wave of internet connected devices and the network they’ll create.   Wired

Why 13 Brands Fell Off a Cliff and Disappeared – Havas Media publishes its Meaningful Brand Index (MBI) every year, which measures human well-being with brands at a business level. Tech brands top the MBI, seeing as they have such power to change our lives. The current pace of change in business and technology combined with consumer apathy has led to the decline and/or demise of big brands, like Kodak and Blockbuster. eConsultancy

Google’s Matt Cutts: Here’s How to Deal With Short-Term Duplicate Content Issues – If your website sometimes has minor duplicate content issues, how can you avoid being caught in Google’s duplicate content filter? Matt Cutts, head of the web spam team, explains when you should use ‘rel=canonical’ in such instances. Search Engine Watch

Twitter Adds Targeting By Email Address, User IDs – One of the additional ways to create audiences rolled out yesterday, allowing marketers to use their own lists of customer email addresses to retarget them on Twitter or use CRM database records previously stored with an ad partner. Similar to how Custom Audiences work on Facebook, email addresses would be sent to Twitter as hashes — unreadable alphanumeric strings — for matching against its database to find the appropriate users. MediaPost

The Ultimate Guide to Native Advertising – There is probably no term that is getting greater play in the marketing space right now than “native advertising.” Even the New York Times is getting in on the action and including native advertising opportunities in their latest redesign. This type of in-line “native” advertising represents a great opportunity for both media companies and brands, but it’s imperative to understand all the moving parts. Joe Pulizzi, founder, Content Marketing Institute, offers a definitive guide to how and why offering contextual information on sites leads to higher engagement at a higher rate than banner ads. LinkedIn

Goodbye Facebook Sponsored Stories – Effective April 9, 2014, Facebook will drop Sponsored ad units. Sponsored Stories were one of Facebook’s more controversial ad units — essentially, they would repackage some of your actions on Facebook and let advertisers sell them to your friends without your permissions. In light of a class-action lawsuit in 2011, which they settled for $20 million, I’m sure they are glad to see them go. The Verge

14 Customer Experience Trends for Marketers in 2014 – What your marketing organization can do to better prepare for the “Year of Empathy.” One trend noted, understanding how your customers truly want to interact with your organization. Use customer journey mapping to optimize for the customer experience. Direct Marketing News

Mobile Use Grows 115% in 2013, Propelled by Messaging Apps – For the past five years, we have watched mobile disrupt every industry, in every country, and continue to break its own records year after year. 2013 did not disappoint. However, the segment that showed the most dramatic growth in 2013 was Messaging (social and photo sharing included), such as SnapChat, which dramatically outpaced other popular categories. Flurry

How We Are Entering the Second Phase of the Mobile Revolution – The technology that powers mobile is in the process of spreading, well, everywhere—and the world around us is going to be radically transformed as a result. Think of it as the next big phase in the evolution of mobile computing. The next phase of mobile will result from continuing rapid advances in just about every technology that makes it possible for that device in your hand to query huge remote databases and perform complex calculations. ReadWrite

Meet the Man Google Hired to Build the Next Generation of Artificial Intelligence – The deep learning movement, a crusade to mimic the brain using computer hardware and software, has been an outlier in the world of academia for three decades. But now, a neuroscientist named Geoffrey Hinton and his small group of deep learning colleagues has caught the attention of the biggest names on the internet — including Google and Facebook. Wired

Blackphone Sets Out to Uphold Privacy – This new smartphone is built by a team of cryptologists, security and mobile experts. The sole purpose, the founders say, is to uphold the objectives of privacy. The Blackphone will give the user the ability to make and receive secure phone calls, exchange secure texts, transfer and store files and video chat without compromising any user privacy on the device. Right now when you make calls on your smartphone, they are not that secure or private. Forbes

E-books Aren’t Going to Make Print Obsolete Anytime Soon – Some 28% of Americans read at least one e-book in 2013 up from 23% the year earlier, according to a new survey of more than 1,000 adults from the Pew Research Center’s Internet & American Life Project. But the percentage of people who read print books increased as well: 69% said they read at least one print book, up from 65% the year before. Mashable

There’s No SEO Without Mobile SEO – It’s 2014, which means we are officially one year away from the year that Kelsey Group predicted mobile search will eclipse desktop search. Are you making your mobile resolutions to ensure you’re ready for when that time comes? Marketing Land

More Well-Known U.S. Retailers Victims of Cyber Attacks – Target Corp. and Neiman Marcus are not the only U.S. retailers whose networks were breached over the holiday shopping season last year. Smaller breaches on at least three other well-known U.S. retailers took place and were conducted using similar techniques as the one on Target, according to the people familiar with the attacks. Last week, Target said the data breach was worse than initially thought. Reuters

On Strategy vs. Tactics. Does Your Digital Marketer Really Know the Difference? Lynn Brown said, “Good to see you sharing this information Lee. It certainly hits the nail on the head. There is a huge ability for companies to take advantage of digital marketing if they have the vision and clarity on what it is they want to accomplish. Great article and I look forward to sharing.”

On Content Plus Social is A Sweet Song to Sing – Interview with Amy Higgins of Concur, Juanita Dailey said, “Great article. I especially like the breakdown of how you can share an ebook. Titles are very important and I will be putting more emphasis on this. You want to get your readers attention and make them want to read your content. Although your content may be good, if you can’t grab the readers attention with your title, they won’t read it and you have wasted your time. Think I’ll take a look at revamping my titles as well.”

On What You Need to Know About Mobile Content Marketing: Pros, Cons, Examples and Best Practices, Barbara Mckinney said, “Great article as always, Nicolette. An effective mobile content strategy demands an understanding of your audience’s mobile usage. Marketers like to imagine they know their customers. But the reality of mobile usage may differ from your perception.”

On Native Advertising: Evil, Savior or Use As Directed? You Must Choose or You May Lose, Patrick McFadden said, “The best advice given in this article, “don’t make the mistake of thinking that any one marketing and communications tactic will be your savior. Know your customers and how they discover, consume and act on information.”