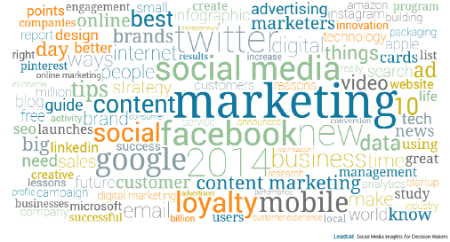 When identifying influencers as part of your social media and content marketing program, topic match and popularity are not enough to qualify an influencer as “effective”.

By effective, I mean the ability and likelihood that a person can actually inspire action amongst a community.

To determine the effectiveness dimension, it’s important to use tools that look at other criteria such as the extent to which people respond and take action in response to a person. When it comes to Twitter, things like ReTweets and sharing of links are signals worth looking at.

To shine a light on the digital marketing category, Leadtail and Punchtab have published a new report (h/t SocialFresh) “How Digital Marketers Engage on Twitter” that includes a list of publishers and people that are the most often mentioned and ReTweeted by digital marketers. The information in reports like this one can be pretty useful for understanding how influencers interact with social content. The formula is pretty straightforward:  How do influencers discover new information, what are their preferences for content consumption and engagement, which topical triggers will inspire them to take action?

If you’re working in the digital marketing influencer space, this kind of report can be insightful. Keep in mind, it’s a snapshot of interactions and activity over a 2 month period of time, vs. an extended period.

Congratulations to the many people in the digital marketing and PR space that appear in the list – your curating and sharing is what makes the social web go ’round!

There are several lists and word clouds in the report, but here’s the list of the 50 people most ReTweeted by Digital Marketers. Yes, I’m as surprised as you are to see me in the #5 slot just below Jeremiah Owyang and above Guy Kawasaki:

I’m sure people are wondering, “How do you get ReTweeted more often than “real” business celebrities like Richard Branson or Ariana Huffington?

Clearly those with large networks and that consistently share useful information are going to be engaged with and mentioned more often.

Additionally, if someone on a list like this is an active public speaker and smart about promoting live tweeting during their presentations, they’re going to rank pretty high. Also, if you’re a guest on several Twitter chats during the sample period, that can boost RT numbers too. Those of us that work with this kind of project and data will dig and dig until we find answers so we can develop an informed approach.

With lists like this, it’s worth making the effort to distinguish the merit of the influencer over time vs. the merit of the moment because of events. High engagement for both situations is great – it’s just that you may want to approach influencers differently based on where they’re getting that engagement from. Ex: Connecting via a Twitter chat vs. pitching via email.

Another consideration for lists that are samples from social networks like Twitter is that engagement levels for many influencers is dynamic.

Taking a took at the past 30 days of RT + Twitter handles for the top 3 on the most ReTweeted list, @ValaAfshar (CMO at Extreme Networks) clearly dominates when factoring in all Twitter users vs. just digital marketers. That’s something to consider as you evaluate influencers as effective over time with a broader audience.

Part of the identification and recruiting of influencers involves networking your way into their social field of view. For example, I’m not connected to every relevant digital marketing person on this list but there could be mutual connections that could be leveraged.

To find out where those connection opportunities might be, I logged in to a tool called Traackr, which has an awesome new(ish) feature that allows you to import a list of Twitter handles to create a Group or Project. From there you can get info on the other social networks the influencers are active on, latest content published or shared and a sweet visualization of how they’re connected. Disclaimer: Traackr provides me a limited version of their tool with no obligation.

For this post, I imported the list of 50 people most ReTweeted by Digital Marketers above and filtered down to those I have the strongest connections with. You can do this for any known entity discovered through the influencer search or for those who you import. 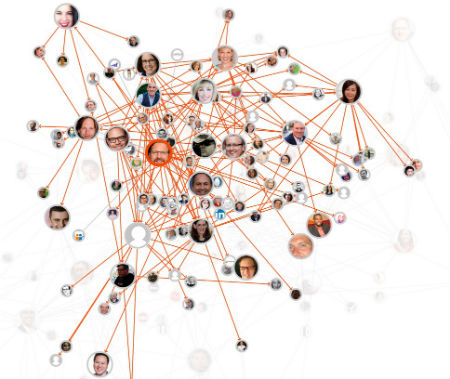 From here you can click on any “node” to see specific connections and even social network data for each person. I’m showing a visualization here, but you can see the info in a more tabular format too.  It also suggests other influencers you may want to add based on characteristics of the list you imported. It’s a pretty cool tool actually and I’ve found myself using it more often.

Who influences the influencers?

Another approach to take with lists like this is to find out who influences the influencers you would like to connect with. 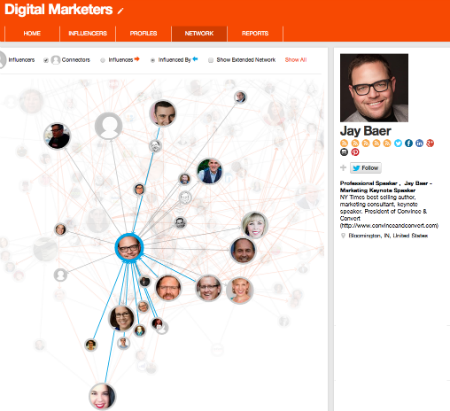 In this view, the blue lines pointing inwards represent influencers of the influencer in question.  The idea here would be the “influenced by” dimension can help reveal introduction and engagement opportunities by identifying the second level influencers you’re already connected with. For example, if you’re already connected with Kim Garst and Mark Schaefer (lucky you) those connections could be useful in a pitch to Jay: “We already have Kim and Mark on board and would love to have you too…”

How you execute on these opportunities for connecting with influencers depends on which networks you already have connections on, timeframe, and what you want them to do.

You could also use a tool like BuzzSumo to drill down into the influencer’s blog and see who is sharing their posts. Additionally, you can use BuzzSumo to get a list of the links shared by a particular influencer on Twitter to see who they are often pointing to. You can drill down on each of those shares to see other influencers sharing the same link. Most of the data from BuzzSumo can be exported so you can crunch away. 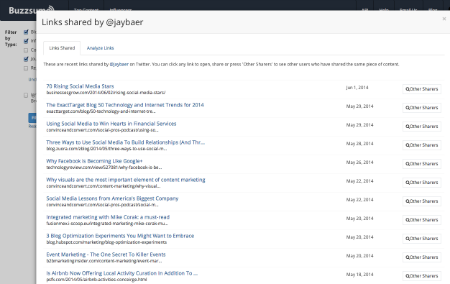 There are many ways to use lists like this to identify influencers and influencer engagement opportunities. The good and bad news of tools is that there are way too many specialized tools that do the same kind of thing and very few that do most of the things you might want to do.  Rest assured, I’ll continue testing and share tools here.

Congratulations to everyone and the publications included in this report. It can be very satisfying to learn from 3rd party sources that the social content you’re sharing has resonated with a relevant audience.

If you were making a short list of digital marketing publications and another list of individuals, who would you include?