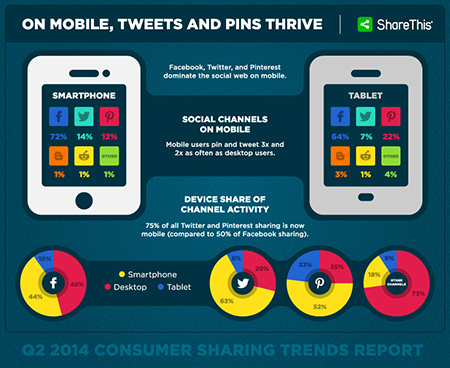 More Than 7 in 10 Twitter, Pinterest Shares Are Now Done Via a Mobile Device [STUDY] – The vast majority of all Twitter and Pinterest social sharing is now done via a mobile device – compared to slightly more than half of Facebook sharing – reveals a new study from ShareThis. AllTwitter

Foursquare Releases Social Search-Centric Redesign – The network is now more focused on allowing users to tailor the network to their personal preferences, which, conveniently, opens new opportunities for brands. After relegating check-ins to a different app in May, Foursquare debuted a redesign of its core functionality on August 6 that instead focuses on social search. ClickZ

Fake Googlebot Activity up 61% [Report] – Just in time for the annual security conferences of Black Hat and Defcon in Las Vegas, Nevada, Incapusla Security has released their latest report on the state of Googlebot (and it’s evil malicious twin). The news isn’t good for those of us who spend our days staring at website statistics. Search Engine Watch

23 Million Twitter Users Are Bots – In an analysis of its user base, Twitter said 30 million, or 11% of its 271 million active users, receive tweets through third-party applications, such as Tweetdeck. Of that group, 23 million, or 8.5% of its active users, get tweets “without any discernible additional user-initiated action.” In other words, their feeds are updating without them having to interact with Twitter. CNN Money

Twitter Unveils Objective-Based Ad Campaigns – The social platform says its new tools will allow advertisers to select objectives and see recommended formats, as well as only pay for actions aligned to their objectives. ClickZ

SEM the Most Effective Acquisition Channel for 85% of Retailers [Survey] – A study by Shop.org and Forrester Research shows 85 percent of retailers surveyed said search marketing (including paid and SEO) was the most effective customer acquisition tactic. And, the research showed paid search was the channel most heavily invested in. Search Engine Watch

Twitter Changes Pricing Model For Advertisers – Twitter is changing its prices. On Thursday, the company announced it was introducing new tools for what it calls “objective-based campaigns,” which include four new ways advertisers can buy ads on the social media platform. AdAge

25% Of Small Business Have Zero Presence In Local Search Results [Infographic] – Apparently 25% of small businesses have failed to get the memo, because they have zero presence in Google or Bing local search results! Marketing Pilgrim

46% of Journalists Open to Using Twitter for Press Releases [STUDY] – Journalists get a lot of email, and a ton of that is made up of press releases. How much? A new survey has revealed that the average reporter’s inbox picks up 50 press releases each week, with one in five being sent more than 100 missives every seven days. AllTwitter

Survey: 74% Of U.S. Adults Would Delete Themselves From Search Results If They Could – In the wake of the the Right to Be Forgotten controversy in Europe, Survey Monkey has conducted a survey of online adults (n=210) to explore U.S. attitudes toward search and online privacy. Eli Schwartz of Survey Monkey has written about parts of the survey on Search Engine Land: Right To Be Forgotten: Do Users Even Care? This article looks at some of the other findings in the survey. Marketing Land

In response to Is Business Blogging Still Worthwhile?, Kami Watson Huyse said, “Blogs are the only content platform that we really own. I have had my ups and downs too, but I am more convinced on this than ever. I tend to think of the social media networks (which come and go, ebb and flow) as outposts of content, but I also like your hub and spoke model. It works as the networks are often the driver of the center wheel, but without the wheel the spokes have no grounding. Landing pages and websites can only take it so far. I would urge people to not be too short sighted.”

Douglas Karr replied, “Social networks provide a surface. Blogs provide a deeper dive. I remember about 5 years ago the first squawks of “blogging is dead”… and the demand for valuable content has increased exponentially since then.”

And Mark Evans added, “I’m a firm believe in the power of the business blog. As you point out, there are many benefits to having an active blog. Personally, it has been the best marketing tool for my consulting business so I’m always telling startup clients that they need to embrace blogging.”

And in on Audience Development for Content Marketing eBook, Heidi Cohen said, “Lee–Thank you for including me with such amazing company. Every marketer should read this ebook to ensure that their content (or any marketing for that matter) supports building an audience!!! Happy marketing,”