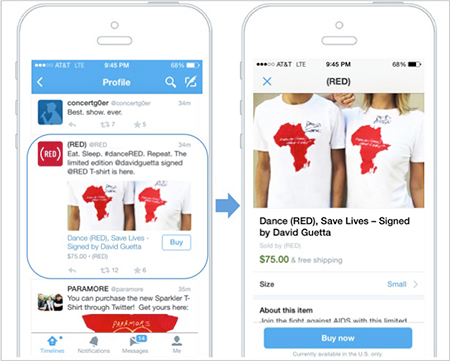 Twitter ‘Buy’ Button Launches (Alongside New Twitter Commerce T&Cs) – We’ve been tracking the rumours for a while and now, finally, Twitter’s ‘Buy’ button has launched, and with it some new Twitter commerce terms and conditions. AllTwitter

Display Grabs Larger Share of Rapidly Growing Global Mobile Ad Spend – Global mobile advertising revenues almost doubled from $10.1 billion in 2012 to $19.3 billion in 2013, details a new report [pdf] from the Interactive Advertising Bureau (IAB) and IHS. While search remained the dominant revenue format, its share of total revenues remained flat at 48.9%, as its 92% year-over-year increase in revenues was on par with the overall gains. Display ad spending showed more rapid growth, more than doubling en route to 41.5% share of total revenues, up from 35.7% the year prior. MarketingCharts

The Most Popular Acronyms on Twitter – Twitter’s tight character-count limit can lead to a lot of brevity in speech. Expressing ideas needs to be done succinctly, and as such, acronyms like LOL, OMG and IDK are very popular. A study conducted by We Are Social ranks the top 50 social acronyms. SocialTimes

Twitter CEO Explains How (And Why) Random Favorites Are Appearing in Your Timeline – Last month Twitter started experimenting with showing favorites to some users from the accounts that they follow – that is, when their friends favorited a tweet, some of those favorites started to show up in their timeline. AllTwitter

Facebook: 15M People Talking About ALS Ice Bucket Challenge, 1.2M Videos Posted – People all over Facebook are soaking themselves with ice water to bring awareness to ALS — including Facebook CEO Mark Zuckerberg and Chief Operating Officer Sheryl Sandberg. But how widespread has this been? Facebook released statistics Friday, showing that 15 million people across the social network have posted about, commented or liked a post related to the ALS Ice Bucket Challenge. People have also posted more than 1.2 million videos. AllFacebook

79% of Marketers Have Used Promoted Tweets in 2014 (But CPC Has Doubled Since January) [STUDY] – Twitter launched its Promoted Tweets marketing products back in April 2010 to much fanfare (and more than a little hyperbole). While the platform took a little while to find its legs, a new study has revealed that almost four in five U.S. marketers have now used Promoted Tweets in their advertising campaigns, despite paying more than twice what they were just six months ago. AllTwitter

Study: Consumers Increasingly Turn To Mobile & Varied Media Combinations In Last Mile – If you thought people started their shopping on mobile then turned to their laptop or desktop to close the sale, you’re mistaken. Last week, the Local Search Association released an infographic based on 2013 statistics from our annual “Local Media Tracking Study,” conducted by Burke, Inc., which provides key insights into the reach of various local media sources across computer/laptop, mobile phone/smartphone and netbook/tablet. Search Engine Land

Tumblr to Offer Brand Image Analysis – Tumblr is sealing a deal this week with image recognition company Ditto Labs to provide marketers with intelligence on how their brands are presented in the 130 million images posted daily on the social network, according to a report in Mashable. Digital Marketing News

Just One Third of Marketers Say They Can Accurately Measure Social Media ROI [STUDY] – How do you measure the return on investment for your social media campaigns? It’s the age-old question, and one that brands and marketing departments have struggled to answer for a decade now. And they’re still mystified: a new study reveals that just one third of executives are confident that they can accurately measure the effect of company social media use. AllTwitter

Most Popular Digital Marketing and Online Advertising Metrics – How do most digital marketers measure success? CMO took a look. Here is what they found. MarketingCharts

99% of Social Media Posts Generate Almost no Engagement [STUDY] – A new study has revealed that 99 percent of organic, unpaid social media posts generate little to no engagement, with that remaining one percent soaking up almost all of the Likes, retweets, shares and comments across the top platforms. AllTwitter

In response to 5 Ways to Optimize Your Content Marketing World Experience, Mike Turner said, “Great article Lee! There are plenty of new ideas to add to those I had already planned. Thanks for posting.”