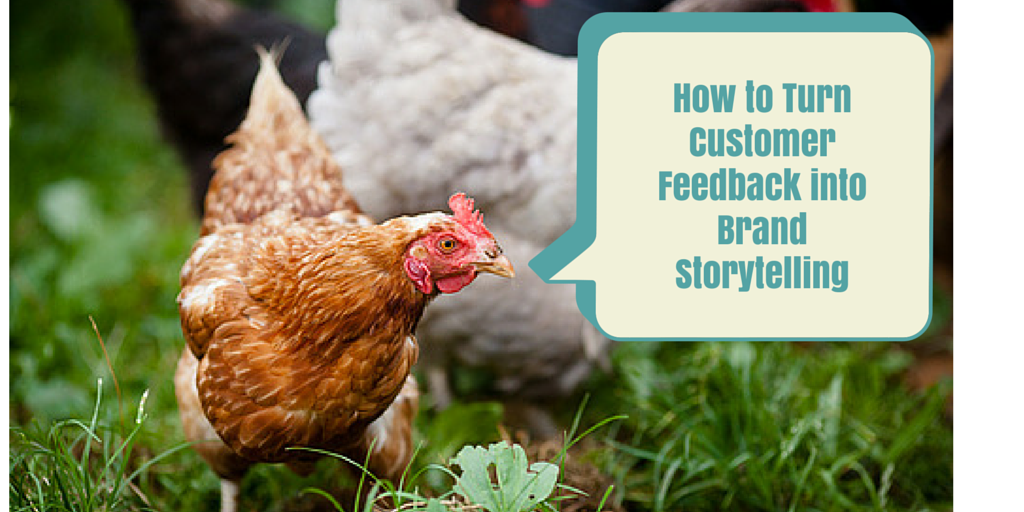 Here in Minnesota, a small egg company is getting big press after ruffling the feathers of a concerned shopper.

When Locally Laid Eggs received a letter from a grocery store shopper, saying that the company’s name is “offensive” and its advertising “vulgar,” the company took to its own blog to offer up a rebuttal. In doing so, they enlightened readers about locally-sourced food and responsible farming and revealed some key marketing lessons in the process.

Most companies would have tossed the letter and missed out on the opportunity to use this kind of storytelling to pick up on the interest that Locally Laid had generated. But Locally Laid understood the importance of story before marketing. From the tiny Wrenschall, Minnesota town (population 399) the small company had the foresight to not only address — respectfully — the letter writer’s concerns, but to point out the reason why their product stands out from competitor options on the shelves.

Lucie Amundsen, the self-proclaimed “marketing chick” at Locally Laid, knows what she is doing. Here is an excerpt from her letter to the unidentified shopper.

“When our perfect double entendre breaks through the media clutter in which we’re all steeped, we leverage it. With that second look from a consumer, we educate about animal welfare, eating local, Real Food and the economics of our broken food system.

We all vote with our food dollars every day and we respect your decision if our playful moniker keeps you from buying our eggs. It was just important to me that you understood everything that was going on behind that name.

Now I gotta ask, would you have learned all this if we were named Amundsen Farms?”

Locally laid received coverage in Twin Cities news publications as well as an invite to tell their story on Minnesota Public Radio. As Twitter and Facebook responses came in from around the country, the company had to announce that their site was running slow because of all the traffic the blog post had received. It’s pretty difficult to buy that kind of reach and sentiment.

“Our Facebook page “likes” went up by a full third, adding on an 2,100 additional fans as of (Monday),” Lucie said. “Our reach in that medium was just under half a million last week. We also sold some 300 of our American-made T-shirts, which has been great for our cash flow … And while I haven’t done egg re-ordering with stores yet this week, I’m been getting lots of photos of empty shelves and people asking when cartons will be restocked. I’m calling this retaliatory consumerism, (with a wink).”

Lucie didn’t anticipate, or plan for the response her blog post had received.

“It’s a pretty wonky piece and I thought that about 12 of my farm-y or policy-minded friends would enjoy it,” she said. “So I’m surprised and pleased that this rather think-y example of polite discourse in a derisive world would get this much attention.”

Many companies would have simply ignored the letter or reacted from a customer service perspective and not use it for a marketing opportunity. To that end, companies would do well to learn from the Locally Laid approach. Here are four content marketing lessons businesses can takeaway from Locally Laid:

Lucie Amundsen could have easily just chuckled and tossed the angry letter into the recycling. Chances are, most companies would have done just that. By using the letter as a trigger to tell her brand’s story, Lucie was able to reach an audience through shares that she may not have connected with in the past.

Takeaway: These opportunities are likely to come in the form of social even more so than a letter to your office. If your company isn’t monitoring social media chatter about your company’s name and industry, you may not know. Find a way to filter these opportunities out and take advantage of them.

Lucie’s blog post responds to the reader’s objections, but more importantly it tells the story of why Locally Laid does things the way they do. The post points out specific data related to the food industry and champions the concept of Middle Agriculture and it’s effect on rural economies. Lucie is not only telling the Locally Laid story, she’s telling the story of all mid-sized farms.

Takeaway: What your business stands for is bigger than your business alone. Lucie knows that and is willing to promote other mid-sized ag businesses.  In doing so, she is spreading good will. What is it that your company stands for, and how does that tie into the bigger picture of the industry?

Sure, the name of the company is a little funny and that gets people’s attention. Sure, the fact that the letter writer might be a little “out there” received some comments and shares. But those aren’t the only reasons this story spread. It moved because the blog post is very well-written. Lucie covers major social and economic issues in the post and does so in a succinct, easy-to-follow post. Including images and a doughnut chart further assist in the storytelling.

Takeaway: Quality speaks volumes. If you’re not proud of the content you’re producing, then take another look and make it so. It is tempting to respond with speed, but responding in a timely manner with quality content is what is going to resonate.

When all is said and done, there are a couple of not-so subtle sales opportunities included in the blog post. Lucie says that she would offer to send the letter writer a “Local Chicks are Better!” T-shirt, but he probably wouldn’t want one. Of course she takes that opportunity to link to a page on the Locally Laid site where similar shirts can be purchased. The blog post also mentions an upcoming book and reminds readers to follow along with news from the farm on Facebook and Twitter.

Takeaway: Always give people something to do next. If you’re effective at persuading people and communicating your ideas and you’ve engageged with them, they’ll want to do something else — is it a social share, a transaction opportunity or more content to consumer. Give them the opportunity for something to do next. It comes across as promotion, but it’s a promotion as a service to your are likely looking for. Make it easy for them to make the next step.

Jason and Lucie Amundsen at Locally Laid are no strangers to the spotlight. In 2013, the company was a finalist to win an ad that would run during the Super Bowl.

It is clear that the Amundsen’s know their way around the digital media landscape. They understand the power of a company blog and have used it to leverage their business. It will be fun to see what kind of legs their story gets as media outlets continue to pick it up.