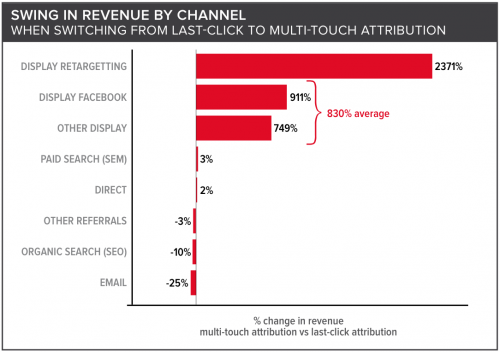 Facebook and Display Ads Should Be Credited For 830% More Revenue – A recent Facebook-funded study conducted by Datalicious, a full-service data agency, found that Facebook and display advertising should be credited for 830 percent more revenue than previously thought. Inside Facebook

Facebook to Begin Auto-Enhancing Photos – Facebook will begin auto-enhancing photos that are uploaded via its iOS application, with Android to follow shortly thereafter, Josh Constine of TechCrunch reported. AllFacebook

The 8 Biggest Problems Facing Social Media Marketers – More than four in 10 marketing professionals cite lack of in-house resources and skills as the biggest obstacle to achieving social media marketing success, reveals a new study. Ascend2 polled marketers worldwide and found that 43 percent said that they simply did not have the right caliber of skilled employees to deliver on their social media campaigns. AllTwitter

Facebook’s New Feature Set to Improve Quality of All Images Uploaded There – Do you love to click photos with your iPhone? It surely can be an enjoyable pastime, even if you are not a great photographer. But will you be able to manage every aspect of photography in the right manner? Make your clicks picture perfect? Social Media Today

Pinterest Announces Promoted Pins For All – Come January 1, Pinterest promises a chicken in every pot, a board for every subject and promoted pins for all! (All being, all approved businesses who are willing to pay the price.) Marketing Pilgrim

New Social Media Research Shows What People Expect From Brands – Are you wondering what consumers expect from brands when it comes to social media? A serious of new reports answers this very question. Consumers have strong expectations for how brands use social channels. In this article, you’ll discover findings from studies to help you determine what consumers want to see from you on social media. Social Media Examiner

Facebook Ordered to Stand Trial Over Claims That It Scanned Users’ Messages – U.S. District Judge Phyllis Hamilton in Oakland, Calif., dismissed some claims in a class-action lawsuit against Facebook but ruled that the social network must face claims that it scanned the content of messages sent between users, for advertising purposes, Re/code reported. AllFacebook

Just 4% of Employees Say Social Media is “Very Important” to Their Job – Social media has changed the world. Or say they say. (And I’m one of them.) But according to one new study, it hasn’t changed the world for the average employee – just one in 25 respondents to a new study said that social networking sites such as Twitter, Facebook or LinkedIn were very important to their job. AllTwitter

In response to The Gift of “Give to Get” in Social Media and Content Marketing, Mark W Schaefer wrote, “Wow thanks for the very kind shout out Lee and also for the great memory of that photo!”

On Marketing Prediction Overload: 200 Plus Digital Marketing Predictions for 2015, SUMarketing said, “Great post Lee, there’s an awful lot of information to digest but it’s well worth spending the time going through it to come up with an effective strategy for the coming year.”

Mari Smith said “Woweee, the motherlode, Lee! Will def share this one. Peeps need not look anywhere else, except maybe their own crystal ball. Lol”

Amanda Maksymiw commented, “This is a great collections of predictions. Thanks for including Lattice’s ebook in the mix. Happy holidays!”