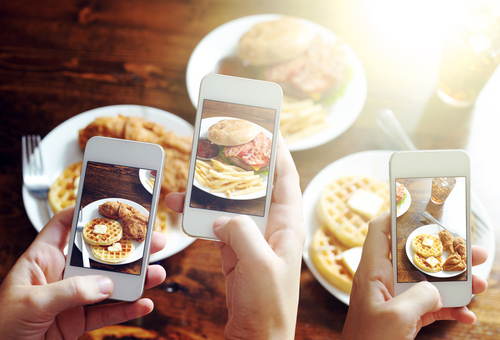 From James: Today’s post is the fourth and final in a series of articles on social media marketing – all part of a contest within TopRank Marketing for a chance to attend Social Media Marketing World. Watch for live posts from the winner of the contest March 25 -28.

Boom! Making an impact and making it quickly is a primary goal of social media. You only have a few seconds to grab ahold of the attention of your followers while they’re scrolling through their stream, so impact is important.

Instagram’s growth is closely related to the power of its users. One image can tell a full story, with a wide variety of emotions and feelings surrounding it. By having the right lighting, colors and filters, a strong message can be conveyed to and felt by all of the followers of the account. Then add a few words and a hashtag or two, and a mini billboard conveys a message that a 30-second commercial might have a difficult time competing with. This post will show how Instagram can make an impact without having to include much in the way of verbal messaging.

The impact of Instagram can be seen by its rapid growth in users. In just 2 months after its initial launch in 2010, Instagram had collected 1 million users and then hit 10 Million users near its 1 year anniversary. Now it’s sitting at 150 million active users with 55 million photos posted per day.

Instagram’s success and the success of its users don’t just come from people taking photos and sharing them on the platform. As with all marketing, there’s strategy behind it, and those that adapt and execute it the quickest are the real winners!

Here are some B2B and B2C examples of some of the best Intagrams that were posted recently which resulted in huge engagements, by combining a highly impactful image with a brief message to go along with it:

This post combines an image of 2 men playing a simple game on a large Lenovo touch-screen table PC with 3 simple words of text, “No quarters required.” The image conveys a message rather quickly, people can have fun using great technology that has Intel processors inside of them, without having to use a quarter like old-school video games used to require. It’s also noted that no hashtags were incorporated and deemed necessary for this post.

Winter light streaming through our offices at Astor Place in #NYC. Photo credit: @yangyyy88 #IBMStudios A photo posted by IBM (@ibm) on Jan 19, 2015 at 9:18am PST

An image doesn’t necessarily have to be in color in order to make an impact on its viewers. With this post, a black-and-white image is used to show the sun shining in an office located in New York City. The sun hitting the window frames creates a pattern on the carpet of the office space, and it also creates some neat shading on the half-wall further inside the office. Add to all of this, the different degrees of shading that show up in the room. It makes for a very artistic look. In addition to the image, there are just 11 words of text, which includes the use of 1 hashtag. Simple yet classic.

For this post, a very non-studio and stylized image was selected, with all of the sweet/sugary, mouthwatering ingredients that you could imagine, piled into the container. It oozes with the “You really want me don’t you?” vibe. It then incorporates 14 words of text with the message, and zero hashtags were included in the post. Are you dreaming of eating some ice-cream right now? Then the post worked!

How about making something very sweet looking and simple out of a company’s primary product? That’s exactly what the Oreo cookies account did. That took one of their original cookies and disassembled it to create a cookie that looks like a penguin’s face. A close-up of the finished work was taken in simple lighting, and then 6 words of text was added, without a single hashtag. Simple, easy and very effective.

Making an impact with Instagram is more than just taking pictures and sharing what they are, it requires strategy as does any other social media channel. People don’t want to just see products like a circular that comes with a newspaper, they want to have a visual experience that educates what the company is all about. Marketers then have the responsibility of sharing the essence of their brand in a visual way when using Instagram.

Here are some tips to help you make an impact with Instagram:

You only have a few seconds to grab the attention of an Instagram user to make an impact. If you create a good strategy, you can have success.

Are you looking to gain more insight and knowledge on how to better use Instagram and other social media tools? There’s a great social media conference happening in sunny San Diego March 25 – 27 that you’ll definitely want to check out. Social Media Marketing World conference, and it’s going to be jammed packed with social media marketing knowledge from the top experts in the field.