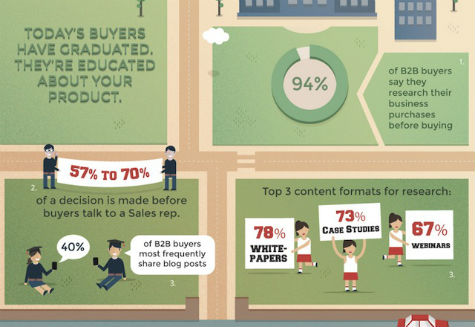 Marketing Trends Road Map for 2015 [INFOGRAPHIC] – Feeling a little lost? Does your marketing plan for 2015 look like it was drawn on a napkin? Uberflip, a content publishing platform, has an infographic that may help guide you through the year. Uberflip

Facebook Introduces Place Tips in News Feed – Starting last week on Facebook for iPhone, place tips may show up at the top of your News Feed when you’re out and about. Facebook

Tumblr Launches In-House Ad Agency – Tumblr is joining the ranks with YouTube in using its social network to leverage creators and make them money, and maybe even Michelle Phan famous. Today it launched the Creatrs Network, an agency that will select Tumblr users that are onto something and help them connect with brands. SocialTimes

Almost 1 in 3 B2B Marketers Say Their Content Is Company-Focused, Not Customer-Centric – The biggest way in which B2B content fails to change business executives’ perceptions is by too closely resembling a sales pitch, according to a study released last year by the Economist Group and Peppercomm. Yet, a sizable portion of B2B marketers might be falling into that trap, per new survey results from Corporate Visions. MarketingCharts