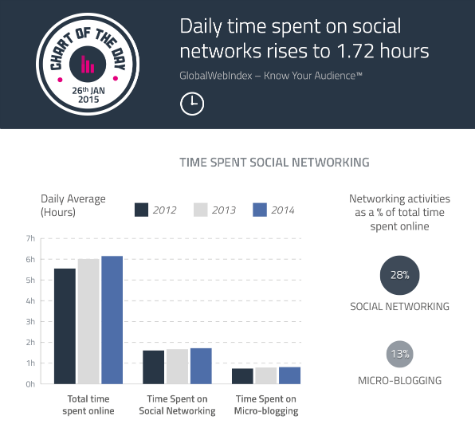 28% of Time Spent Online is Social Networking – How much time do you spend each day on social networks?According to new data, the average user logs 1.72 hours per day on social platforms, which represents about 28% of all online activity. globalwebindex

Facebook: 24.63% of Social Referrals in December (Pinterest: 5.06%, Twitter: 0.82%) – Facebook’s share of social referral traffic rose more than two percentage points in the fourth quarter of last year, and the platform now accounts for almost one in four of every social website visit, reports Shareaholic. SocialtTimes

Social Media Is The Least Popular Channel For Customer Service [Survey] – While customer service complaints on social media may be the most public, they aren’t the most popular (by a wide margin) according to a new study. Marketing Land

Social Media Makes Up Nearly A Third Of All Referral Traffic – Social software company Shareaholic argues that the shift from search to social is here with the release of a new set of data that reveals social media referral traffic is up 22.71% from this time last year. Search Engine Journal

Study: 80% of Companies Will Increase Digital Marketing Budgets – As digital marketing becomes increasingly important to business strategies, 80% of companies plan to increase their digital marketing budgets over the next 12 to 18 months, according to a study released Tuesday by Mondo. Ad Age

Pinterest to Focus on “Intent” Data – Pinterest is enhancing its Promoted Pins offering by broadening its data pool. The move is hoped to provide better targeting options for advertisers. Pinterest plans to unlock some of its user data to help advertisers produce more targeted ads. Clickz

Facebook Reaches 1.39B Monthly Active Users, Half A Billion Are Mobile-Only – Facebook announced its Q4 2014 earnings today, revealing that 1.39 billion users now use the social network every month, which marks a 13% year over year growth. Monthly active users on mobile grew even more at 26% year over year, now sitting at 1.19 billion in total. Search Engine Journal

Pinterest Is Now Pushing Promoted Pins Into Users’ Home Feeds – The social bookmarking site is accelerating its advertising efforts in the U.S.; it previously only served paid ads in category and search results. Marketing Land

LinkedIn Sells Nearly Half a Bill Dollars in Ads Last Year – LinkedIn’s advertising revenue reached $153 million in the fourth quarter, a 56% increase over the same time the year prior, the company said Thursday. Ad Age

Fewer Than Half Trust Social Media for News, Says Study – More and more people are turning to social media to obtain their daily news fix, but fewer than half trust platforms such as Facebook and Twitter as a source of this news, reveals a new study. SocialTimes

On Is Your Business Blog Running on Empty? Here Are 4 Ways To Fill the Tank, Nataliya K. said, “Absolutely loved it! I appreciate you mentioning that someone will eventually ask the right questions with regards to quality and strategy of their blog. On the other hand, because great content is so precious, it is very expensive for companies to invest into in-house power writer (because they are rare!)”