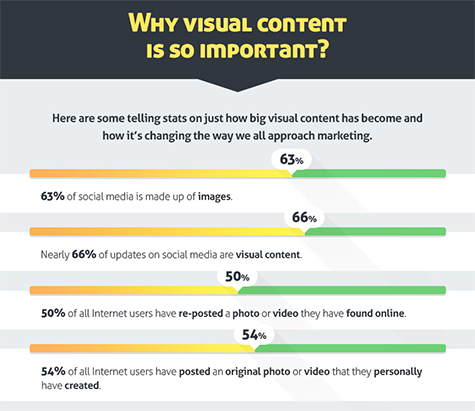 Content With Relevant Images gets 94% More Views [Infographic] – Do you want more eyes on your online content? It could be as simple as adding a photo or a video to your post. Visual storytelling is incredibly powerful. The good folks a Quicksprout recently published an infographic (below) outlining a few stats suggesting just how important “the visual” is on social media. Quicksprout

84 Percent of Millennials Don’t Trust Traditional Advertising – Social media has changed the way brands engage with their consumers, say marketing experts from Crowdtap, Weight Watchers, and MRY, who believe brands must put people at the heart of their marketing strategy to create authentic social content. ClickZ

Almost 60 Percent Of Marketing Pros Use Automation, 90 Percent Say It Works – A majority of marketing and business professionals surveyed say their companies currently use marketing automation to some extent, and nearly 90 percent call it a success. Marketing Land

Twitter Reveals ‘Retweet With Comment’ for Added Engagement – Microblogging website Twitter has launched a “retweet with comment” feature, allowing users to feature other tweets in their own posts without using up available characters and adding an extra level of engagement for consumers. Twitter said on Tuesday: “Say more with revamped quote tweet! Rolling out on iPhone and Web, coming soon to Android.” ClickZ

CMOs On Twitter: What They Share, How They Share It & The People They Retweet Most [Report] – Data analytics firm Neustar offers a comprehensive look at how high-ranking marketing execs are using the social platform. Marketing Land

Google Launches Streamlined Lite Version Of Mobile Search Interface For Slower Connections – Have a slow connection on your mobile device? No worries, Google will give you a lite version of the search interface to speed things up for you. Search Engine Land

LinkedIn Acquires Online Education Platform Lynda.com – LinkedIn made a move that should boost its content value, as the company announced Thursday that it has acquired online education platform Lynda.com. SocialTimes

YouTube Celebrates 5 Years of TrueView Ads – YouTube looks back at the most popular videos of 2010 on the anniversary of the skippable TrueView ads, while also introducing “Cards.” ClickZ

In response to Content Marketing Tools A to Z That You Can Use in 2015 and Beyond, Gary Preston said, “Ok there are about 8 in there I’ve never heard of but now feel compelled to check out. Just as I was considering an early night. Thanks Lee :)”

Puranjay added, “Whoa Lee, this is pretty exhaustive. Love it!”

And on Not Happy With Your Business Blog Performance? Try These 5 Tips:, Ryan Biddulph commented, “#4 is one of my faves 😉 I’ve been scarce here recently; that’ll change after today. Being social helps you gain more readers and customers. It’s like magic, really. The second you comment on a few other blogs from your niche you’re on the radar. If you show up daily, folks will remember you, recalling you, and you’ll grow on them. It works, so darn well. Thanks for the smart share Lee!”