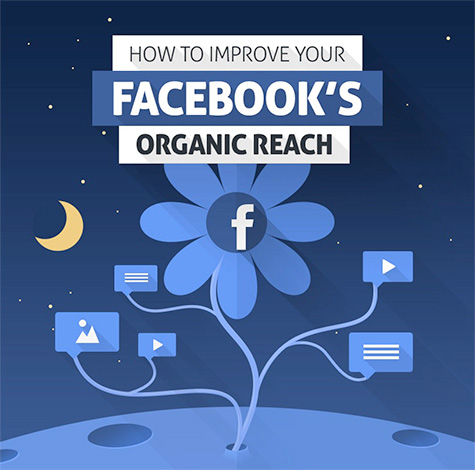 How to Improve Your Facebook’s Organic Reach [Infographic] – Since Facebook made the transition to pay-to-play, reports have shown consistent declines in organic reach for brands. A new infographic from Kissmetrics examines the problems brands are having on Facebook, and offers some possible solutions. Quick Sprout

Facebook Taking Into Account Time Spent on Stories – The goal of News Feed is to show you the content that matters to you. The actions people take on Facebook—liking, commenting or sharing a post—are historically some of the main factors we’ve considered to determine what to show at the top of your News Feed. But these factors don’t always tell us the whole story of what is most meaningful to you. Facebook

Google Links Mobile Ads to Desktop Purchases and Vice Versa – All of the devices people use to browse the web pose a problem for advertisers and the companies trying to sell them ads: They don’t know whether an ad someone saw on one device led to a product purchase made on another device. Ad Age

Google Search Update Rolling Out, Confirmed to Not Be Panda-Related – An update to Google’s search algorithm, acknowledged by Google’s John Mueller in today’s Webmaster Hangout, is currently rolling out. Despite speculation, Mueller confirmed this update is not Panda-related. Search Engine Journal

Report: 76 Percent of Job Seekers Browse Company Profiles on Twitter – Social networks increasingly have an impact on the job hiring process. 93 percent of recruiters use, or plan to use social media in their recruiting efforts and 73 percent have hired candidates via social media. However, the majority of these recruits come from LinkedIn. A new report from Software Advice outlines how recruiters and job seekers are using Twitter. SocialTimes

Facebook Introduces Moments – With a phone at everyone’s fingertips, the moments in our lives are captured by a new kind of photographer: our friends. It’s hard to get the photos your friends have taken of you, and everyone always insists on taking that same group shot with multiple phones to ensure they get a copy. Even if you do end up getting some of your friends’ photos, it’s difficult to keep them all organized in one place on your phone. Facebook

Google Takes on Twitch With a New YouTube App Built for Gamers – Google announced this week it will soon be releasing a new app built for gamers, called YouTube Gaming, which will put the company in direct competition with popular live streaming app Twitch. Search Engine Journal

Twitter Introduces Autoplay Videos – This week, it’s become even easier to enjoy video on Twitter. Now native videos, Vines and GIFs will begin to play back automatically. So you can keep up with the action without missing a Tweet and get a better sense of what’s been shared instantly. Twitter

Pinterest Improves Search With Enhanced Suggestions, Trending Searches, and More – Pinterest has made it easier to find the pins and users you’re looking for with more streamlined search suggestions, the company stated in an announcement today. Search Engine Journal

Bing To Encrypt Searches By Default & Referrer Data To Go Not Provided This Summer – Not Provided is about to expand when Bing goes HTTPS over the summer, ultimately blocking query data in the referrer path. Search Engine Land

From Learn How to Land Your Content a Leading Role: Jay Acunzo of NextView Ventures #CMWorld, Connor Rickett said, “Interesting way of looking at. I like the idea of core content as the hub for advertising. It’s a very accessible model–not just for the people creating the content, but the sort of thing you can draw on a whiteboard while talking to clients, and get through to them. It’s also something you could expand into a good explanation of how and why evergreen content is necessary, rather than just popping out a buzzy article twice a week. Good post.”

And on 13 Experts Discuss Making Content Marketing the Star of Your Marketing, Neaneknea commented, “You can’t just rely on one form, mixing all the forms of marketing offers far much greater results’