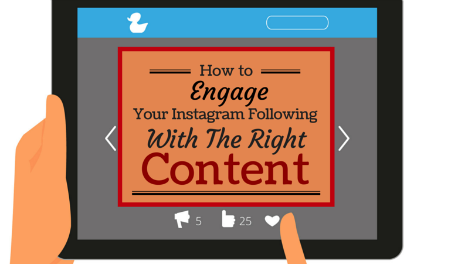 Engage Your Instagram Following with the Right Content [Infographic] – If you focus on one social channel in 2015 it better be Instagram. With over 300 million active users and 3x more engagement than Twitter, it offers the richest opportunity for exposure and conversation around your brand. Learn how you can engage your Instagram audience from this great infographic. Social Media Explorer

Only 21% of Marketers Include SEO in Their Budgets [Study] – Nearly 80 percent of marketing decision-makers fail to include SEO in their budgets, according to new research from global tech public relations agency Hotwire. Search Engine Watch

Instagram Mobile Ad Revenues to Reach $2.81 Billion Worldwide in 2017 – Instagram will bring in $595 million in mobile ad revenues worldwide this year, according to eMarketer’s first-ever forecast of how much advertisers will spend on the social network. eMarketer

Study: Non-Mobile-Friendly Sites Disappearing From Top Google Results – Remarkably there are many brands and companies that still don’t have mobile-friendly sites. According to a new study from Moovweb there are clear visibility and ranking consequences, in addition to usability consequences. Search Engine Land

Facebook Thrives, Pinterest Lags As Driver Of E-Commerce Sales Conversions [Survey] – Facebook was the top converting channel for 64% of online retailers in the US and UK, according to a survey by ChannelAdvisors. Only 5% said the same about Pinterest. Marketing Land

Report: Digital Natives Do Everything From Mobile Devices – A study from Refuel Agency, a marketing agency specializing in teen and niche marketing, examines current trends among millennial teens. SocialTimes

Facebook Study Proves ‘lol’ Is Dying Out Online – Facebook analyzed its users’ posts (private messages were not included in this study) and determined that only 1.9 percent of internet gigglers most commonly used “lol.” Just over half of people preferred the classic “haha,” a third turn to emoji, and the remaining 13 percent is rounded out by “hehe” lovers. The Week

Survey: 71 Percent Browse Retail Apps Before Buying In-Stores – Retailers as a group haven’t figured out how apps fit into their larger strategies, despite all the “omnichannel” rhetoric to the contrary. To date, retail apps have mostly been treated as small-screen versions of e-commerce desktop sites with some “circular” content (e.g., offers) thrown in. Marketing Land

Facebook Pulls Ahead of Google In Referral Traffic – Google may be synonymous with web traffic to many people, but Facebook refers more traffic to news sites, according to recent data from traffic analytics firm Parse.ly. Search Engine Watch

Pinterest and Instagram Users on the Rise – LinkedIn and Twitter, not so Much [Report] – New data from Pew Research has found that the proportion of online Americans who use Pinterest and Instagram has doubled since Pew first started tracking social media platform adoption in 2012. Use of Facebook, LinkedIn and Twitter, on the other hand, while it’s also grown steadily over the years, is now starting to slow. Social Media Today

In response to Learn How to Harness the Power of Millennial Employees, Laith Marmash said, “Really interesting article Ashley. Love your view on failure, and how it should be celebrated as it means an attempt was made to try something new.”

On The New Era of SEO: Optimize for People Before Searchbots, Escapevidya commented, “Thanks for sharing. I have always wondered if I can follow the natural instinct of an user.”