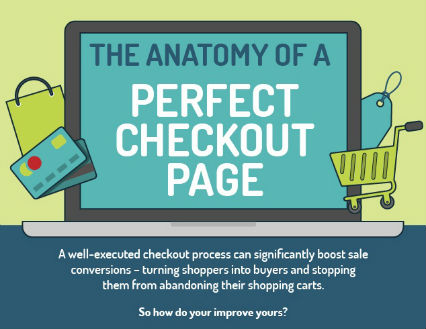 How to Create the Perfect Checkout Page [Infographic] – 68% of all ecommerce visitors abandon their shopping carts – leaving $4 trillion of abandoned merchandize behind. But don’t despair – according to BI Intelligence, roughly 2.5 trillion (or 63%) of this is potentially recoverable. Check out this handy infographic to find out more. VWO

Facebook Launches Signal – Journalists use Signal to surface relevant trends, photos, videos and posts from Facebook and Instagram for use in their storytelling and reporting. This is an easy way to source and curate content from major public events across news, culture, entertainment, sports, and more. Journalists can then embed that curated content online and integrate it into their broadcasts. Facebook

Study: Position 1 In Search May Get Fewer Clicks Than Position 2 With Rich Snippets – Rich snippets can provide a 26% lift in clicks on the second search listing, says a Blue Nile Research study. Search Engine Land

Google AdWords Drops More Referrer Data – Over a year ago, Google AdWords followed suit and went not provided but now there are more changes happening around the ad click referrer data. Google announced on Google+ that starting next week, in October, Google will stop showing anything but the main domain name in the referrer. Search Engine Roundtable

Facebook Retargeting Rising (Report) – Retargeting has been robust for advertisers on Facebook, as ad platform AdRoll saw a 31 percent year-over-year increase in spending. The Facebook Marketing Partner analyzed more than 55,000 campaigns on the social network between July 1, 2014, and June 30 of this year, accounting for more than 37 billion global impressions, and see what else it found. SocialTimes

Introducing 360 Video on Facebook – Starting today, 360-degree videos will begin rolling out in News Feed. Our goal at Facebook is to connect you with the people and things that matter, every single day. Over time, we’ve seen that people enjoy more immersive content in their News Feeds. This is one reason video has been so successful on Facebook, and we’re excited to take it a step further with 360 video. Facebook

Google Display Network Now Auto-Converts Text Ads into ‘Richer Text’ Image Ads – After much head scratching and cruising the web looking for an announcement or news coverage, we found only one little mention of this new format, “Richer Text Ads,” on the Google AdSense blog. Here’s what that means. Search Engine Journal

Facebook Like And Share Buttons To Power Ad Targeting Based On Sites And Apps Users Visit – On Tuesday, the company announced the expansion of ad targeting based on the sites and apps users visit in a blog post: “We are continuing to roll out online interest-based advertising and will now begin including information from pages that use Facebook’s Like button and similar social features, as we announced last year.” Marketing Land

Instagram Hits 400 Million Users – When Facebook paid close to $1 billion for Instagram back in 2012, people thought Zuck had lost it. A the time of the deal, Instagram had close to 30 million users, which meant Facebook was effectively paying around $33 per user, a huge amount. Crazy. Well that investment is looking more and more astute every day, with Instagram, today revealing, via an official blog post, that they’ve now hit 400 million users. Instagram

Gmail Has A New ‘Block Sender’ Option – Gmail users can now block specific email addresses with just two clicks. In the top right hand corner of a message, click the drop-down menu button (upside down triangle), and select “block.” (It appears with the name of the sender in quotes.) Gmail

Pinterest Opens API Platform To All Developers – Developers can now build and test third-party integrations with the Pinterest platform. When they are ready to go public, they need to be submitted to Pinterest for approval. Marketing Land

Engagement on Instagram Tops Facebook – This is the first time that social interactions on Instagram have surpassed Facebook. The media publishing industry saw a 5 percent decrease in total actions compared to July 2015, due to a 12 percent drop in Facebook actions. The media publishing industry represents 31 percent of all actions taken on content published by brands in August. SocialTimes

In response to Why It’s Time for More Participation in B2B Content Marketing, David Butler shared, “Hi Lee, sourcing B2B story ideas is exactly why I developed iPositioning. To operationalize it. I find it is often a broader collaborative task than just hiring a writer to work with a product marketer. “Two brains together can create an even better idea than just one”. So how do you recommend operationalizing the “democratization” part though. This is key to scaling sourcing, ideation, and making it super efficient and simple for everyone to create the story. If we are the B2B marketing team how can we organize and align our target strategy and be on the same “wave length” thinking about stories and content. Thanks for starting this discussion!”