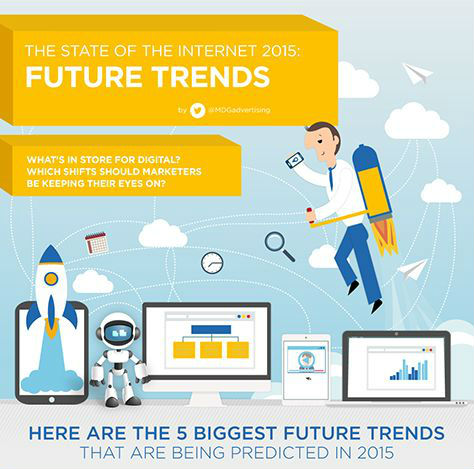 The 5 Biggest Trends Being Predicted at the End of 2015 [INFOGRAPHIC] – It’s almost the end of the year, which means time to check in and take stock of what has happened and what is to come. This year was a big one for social and publishing, with Facebook’s Instant Articles and immersive mobile ads making it easier for brands to publish original content directly on social. Mobile and video are both considered the future of marketing, but what else can we expect? Given what we know now, what predictions can we make for what’s to come? Social Media Today

Instagram Organic Engagement Continues to Fall (Report) – The good news is that Instagram ads are now open to all brands. The bad news is that those ads may soon be the only effective way for brands to reach users. SocialTimes

Facebook Video Ads ‘Significantly’ Better Than YouTube’s: Report – While Facebook’s video ad service is still in its infancy — about 18 months old — it’s already prefered by marketers over YouTube, according to a recent study published by RBC Capital Markets in partnership with Ad Age. Ad Age

Pew Survey: Nearly Two-Thirds Of All Americans Use Social Media – At 90%, young Americans still are most likely to use social networks, but growth in use among those 65 and older is surging. Marketing Land

Study: Rich Media In Search Drives Increased Click-Through – Is ranking in the number one position a guaranteed way to earn the lion’s share of clicks from search? Columnist Nathan Safran’s research suggests rich snippets may factor in, too. Search Engine Land

Study: A Subset of Millennials, Called Gen-Narrators, Are the Most Powerful Influencers Yet – Millennials! They’re so difficult to pin down. We think they’re on Snapchat, turns out they’re not on Snapchat. They’re jaded–no, they’re idealistic. Well, this recent study, conducted by The Economist, presented here via AdWeek, says that millennials “aren’t the lazy, narcissistic, entitled, apathetic parental leeches they’re often described as.” Social Media Today

Google Turning Its Lucrative Web Search Over to AI Machines – For the past few months, a “very large fraction” of the millions of queries a second that people type into the company’s search engine have been interpreted by an artificial intelligence system, nicknamed RankBrain, said Greg Corrado, a senior research scientist with the company, outlining for the first time the emerging role of AI in search. Bloomberg Business

Introducing Twitter Brand Hub – Brand Hub helps advertisers quickly understand their brand’s share of conversation, key audiences, and trends about their brand’s conversation. This 360-degree, real-time view gives the brand the opportunity to learn, take action, and see the impact of their initiatives on Twitter. Twitter

Google To Penalize Deceptive & Sneaky Mobile Redirects – Google announced on the webmaster blog that they will now penalize, through manual actions, sneaky and unwanted mobile based redirects. Truth is, Google has always taken action on sneaky, fraudulent and unwanted redirects, but Google is now making it clear – they will do the same on the mobile front. Google

Study: Mobile Apps For Engagement, Mobile Web For Research & Comparisons – Millward Brown study shows that consumers think clearly about the differences between apps and mobile web and use them for specific reasons. Marketing Land

65% of Adults in U.S. Use Social Media (Report) – What percentage of U.S. adults do you believe uses social networking sites? According to Pew Research Center, the answer is 65. Does that seem too high, too low or just right? SocialTimes

In response to How B2B Marketers Can Use Facebook to Drive Engagement & Generate Leads, Rob Bunting said, “Good information for B2B marketers here. While engagement can be harder for B2B firms, I have also seen it can be done and agree carefully targeted Facebook ads are a good bet. Thanks for sharing Andrea’s tips Ashley.”

And Angela Drt shared, “Thanks for sharing these amazing tools, the article was short and efficient and very well organised ! I definitely agree on the fact that people love to be entertained on every social media but especially Facebook, it is becoming harder and harder for brands to share their messages because they have to be smarter each time and create shorter and shorter, funnier and funnier etc… Videos so their audience are aware of them ! I think it’s really important to have a strategy in order to be the more efficient as possible. Also thanks for sharing picmonkey I didn’t know about it so I’ll go check for sure :)”