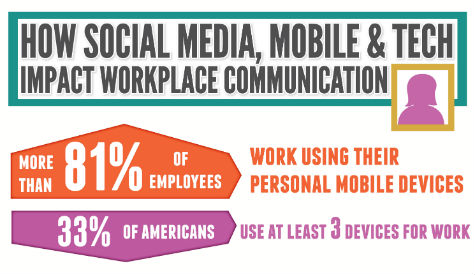 How Social Media Impacts Communication at Work [INFOGRAPHIC] – Workplace technology is important to internal collaboration. This infographic from blogging4jobs.com looks at why many companies see the need for internal social media. It also goes through some of the challenges to the adoption of internal social. Blogging4Jobs

Twitter’s Organic Search Traffic up 20% Since Being Reindexed in Google – Twitter’s organic search traffic on desktop is up 20% in the six months since Google started reindexing tweets in real-time. According to the SimilarWeb study, that equates to an extra 35 million monthly visits. Search Engine Journal

Report: For Every $3 Spent on Digital Ads, Fraud Takes $1 – As digital spend continues to reach landmark highs — it hit $27.5 billion for the first half of 2015 – so does ad fraud, which is now estimated to cost the industry about $18.5 billion annually, according to a report released Thursday by Distil Networks in collaboration with the Interactive Advertising Bureau. Ad Age

Google: 40% Of Searches Return App-Indexed Results In Top Five – Google’s new CEO, Sundar Pichai, answered questions in last nights Google’s earnings report and said a tidbit that I never heard before, but I am told might not be new. He said that “40% of searches now return app indexing results in the top five results.” That is a pretty big stat and Aaron Wall also called it out on Twitter. Search Engine Roundtable

5 Year Study: People who use Twitter are More Innovative at Work – Even as Twitter experiences some well documented growing pains this week, there is strong evidence about the inherent value of the social network. People who use Twitter tend to have objectively more innovative ideas about their work. The more diverse your network of friends on Twitter, the more innovative your ideas tend to be. That’s the conclusion of a five-year study of hundreds of people across five companies, in industries ranging from technology to food production to higher education. MIT

Introducing the Instagram Partners Program – Today, we’re excited to announce the addition of Instagram Partners—a set of experts vetted for excellence ready to help businesses grow on Instagram. We created Instagram Partners to make it easier for advertisers of any size to find the best-in-class technology partners they need to get great results on our platform. Instagram

In response to Why Ongoing Digital Marketing Training Creates More Engaged Employees, Angela Drt shared, “It’s indeed very important to keep stimulate employees so they can do their very best. The employer-employee relationship is a two way relationship and it’s very important to feed it correctly in order to work. Employees need ambition. They need someone who’s gonna push them further and further to accomplish new things and do they job better and better. And it’s the employer’s role, to take care of his employees, because they are the ones making the company runs.”