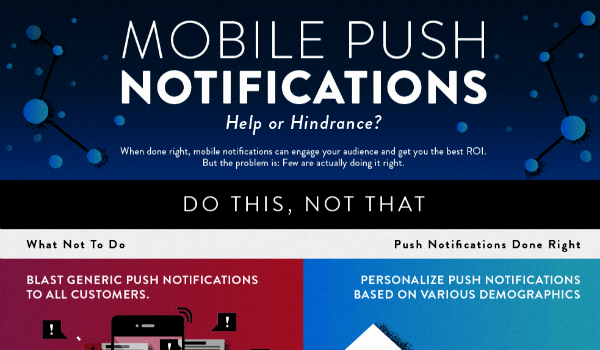 Mobile push notifications: Help or hindrance? [Infographic]
The marketing industry is obsessed with personalization, and rightfully so. It’d be foolish to think that consumers really want the generic, blanket content that was once our only option for mass communication. Personalization has again thrown its hat in the ring, and this time, it’s mobile. In fact, according to Microsoft’s infographic, personalized push notifications that align with user preferences see an up to 300% improvement in conversion rates. Microsoft Azure

Facebook acquires video filter app Msqrd to square up to Snapchat
In what many are saying is a play to keep up with Snapchat, Facebook has acquired video editing app MSQRD for an undisclosed amount. This app will allow users to add filters, stickers and texts on video through Facebook Messenger. According to TechCrunch, this isn’t the first time Facebook has taken a run at Snapchat. In fact, in the past they’ve tried, albeit unsuccessfully, to acquire the app for nearly $3 Billion. TechCrunch

Study: Reviews influence both online, offline shoppers
A new study from BazaarVoice shows that no matter where your customers are shopping for your product, online reviews are influencing their purchasing decisions. The study found that while 54% of online shoppers consulted online reviews before their purchase, 39% of in-store shoppers did the very same. What’s the point here? No matter where your customers ultimately make their purchase, your brand’s online reputation matters. BizReport

Facebook Just Debuted Video for Its Growing Suite of Lead-Generation Ads
Facebook has stepped up its video lead generation game yet again, now enabling online advertisers to include a call to action within video ads that will lead consumers to contact forms. But Facebook didn’t stop there. The same day, they also announced that advertisers can now duplicate lead forms and edit fields across campaigns, integrate select CRM partners for lead gen ads, integrated MailChimp to automatically add leads to their lists, and select from more options in the disclaimer portion of their lead forms. Adweek

Responsive Design Mobile Marketing Emails Generate 24% More Clicks [Report]
With over half of all emails being opened on mobile devices, it should come as no surprise that emails designed for mobile receive more engagement than those that aren’t. A recent study from mYesmail shows that emails that use responsive design see 24% more email clicks, 55% higher mobile click-to-open rate, and even 23% higher desktop click-to-open rates. Despite the success of mobile, only 17% of brands are implementing responsive design in all of their emails. Marketing Land

In/Spree Launches Instagram for Shopping App on iOS
Finally, leaning on influencers for social selling has become more and more popular in terms of strategy since the onset of platforms like Pinterest and Instagram, and now In/Spree has taken the next step, launching their social shopping iOS app. According to Social Times, it’s “described as Instagram for shopping, the app allows users to follow influencers and shop for items that either match or are inspired by the items they’re wearing in pictures.” What dose this mean for social marketers? Along with rich pins you see on Pinterest, and video ad options for Instagram, this could be the next direction that retail marketers are taking in their social marketing strategy, integrating influencers in a natural and impactful way. SocialTimes

Google PLAs: Testing scrollable carousel on desktop & numbered rankings for “best” products go live
Google is testing a scrollable carousel, much like the one featured in mobile search, for product listings. This will bring the desktop search and mobile search experience in line if it takes off, as it’s one of many test Google has run on PLA layouts. They’ve also recently rolled out testing for Ranked PLAs — ‘top’ and ‘best’ products. To be chosen, Google clarified on Twitter, “first the top-rated products are selected to participate in the auction, where they then compete against each other for ad position. So the number one, or first ranked, ad isn’t necessarily the product with the best rating.” Search Engine Land

Thanks for reading and have a great weekend! I’ll be back next week with more online marketing news. Have something to share? Tweet me at @Tiffani_Allen or send it to @toprank using the hashtag #trnews!