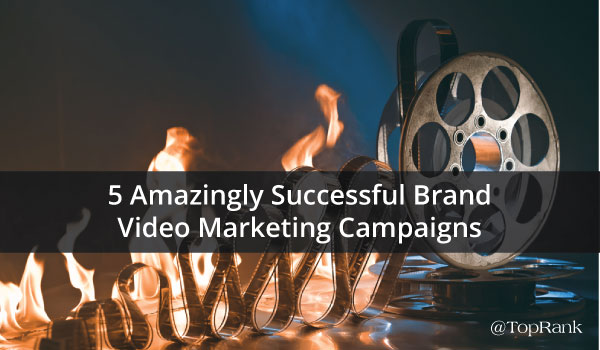 My first cell phone was the unbreakable Nokia 3310. You could run over that thing with a tank and it would still be up for a game of Snake. At the time, its green-and-black display was a technological marvel: You could play games! Look at (pixelated monochrome) pictures! What a modern marvel it was.

Now, of course, almost all of us have a pocket-sized screen that puts the 3310’s to shame (if only they were half as durable…). Most of us are never more than arm’s length from our smartphone. And we’re using those screens primarily for video—fully 50% of all mobile traffic is video streaming.

Whether you’re B2B or C2C, your audience is watching videos. They spend more time with video content than blog content. Even senior executives watch and share: 75% watch work-related videos weekly, and over half share videos with their colleagues.

For marketers, the video revolution represents an enormous opportunity. But getting people to choose your video over thousands of other options can be a challenge. As with all content in a content-logged world, brands need to create extraordinary video to earn attention, likes, and shares.

Most of us have experienced the nerve-wracking ordeal that is a job interview. Combine a job interview with the inherent awkwardness of video conferencing, and you have the recipe for a truly uncomfortable situation.

Greeting card company American Greetings capitalized on those fears by posting a fake job listing, then doing video conference interviews with respondents. Watch the video before you read the spoiler below:

As the interviewer details the harsh working conditions the job entails—no breaks, extra work on holidays, not even time off to sleep—the interviewees squirm in discomfort. Finally, he reveals the twist: He’s describing what moms do every day. The interviewees wipe away tears, talk about their own mothers, and the video ends with a quick link to American Greetings’ card creation website.

American Greetings examines a familiar societal role in an unexpected way. The real people being interviewed are a surrogate for the viewer; our reaction mirrors theirs. Most importantly, they put the product in the background, focusing on the emotional heft of the content.

It’s estimated that nearly 90% of web traffic is videos and pictures of cute animals doing cute things. Okay, I made that up—but if you check your Facebook feed, 90% seems about right. Android jumps into the cute animal trend with this simple-but-engaging video. It’s composed entirely of stock footage of animals in unlikely pairs, but still gets across Android’s point: Their software works on a variety of devices, not one monolithic product line. (*cough* Apple *cough*)

The video is charming, and definitely earned its over 23 million views. My favorite part, though, is in the comments. Android reveals that many of the animals in the video are cared for by non-profit organizations, and provides links to learn more and support them.

Android puts the adorable animals front-and-center. It looks like any number of wildly-shared viral animal videos, until the slogan and logo come peeking in at the end. It seems designed to brighten someone’s day more than sell a product—so it’s free to do both.

Gainsight’s annual Pulse Conference is their biggest event—and biggest expense—of the year. They needed to bring in attendees to make sure the event was a success. Instead of a video with talking heads of the featured speakers, Gainsight earned attention with a playful approach unique for B2B conference marketing. They recruited Chief Customer Officers and VPs of Customer Success to lip sync an a capella version of Taylor Swift’s “Blank Space,” with new lyrics:

The resulting video is a win for everyone involved. Gainsight attracted 2,000 new inquiries about the conference, the executives were featured in front of their company logo bringing humanity to their brands, and viewers got a catchy tune about customer satisfaction.

Gainsight went all out with the production on this video. They drafted new lyrics to the song, hired an a capella group to perform it, and got their influencers to lip sync pretty convincingly. It’s light and playful, but still gets across the information: Gainsight knows a lot about customer satisfaction, they work with these brands, and they have a conference coming up.

Ads for feminine hygiene products have not, historically, been the most compelling pieces of content marketing. Usually they go for the “blue liquid pouring into a pad” or “women walking through a meadow talking about life” tropes.

Always took a sledgehammer to those tropes with their #LikeAGirl campaign. They asked young women to throw “like a girl,” or hit “like a girl,” with the expected results. Then they asked younger girls—those who hadn’t absorbed negative stereotypes—the same question. The striking difference provides a humbling lesson in what “like a girl” can—and should—mean.

The resulting video is empowering, inspiring, and contains not a single scene of blue liquid being dumped on anything.

Like American Greetings did with motherhood, Always challenges the audience to examine something they usually take for granted. They don’t hold back on their message of empowerment, and they’re aiming for a cultural stereotype far broader than their product line.

As one of the kings of content marketing, GoPro has built an empire out of user-generated content from skateboarders, surfers, and other extreme sports fans. So it’s surprising that one of their more popular videos doesn’t feature a single half pipe or mountain face:

The fireman who attempts to save the kitten originally uploaded the video to his YouTube account. GoPro spotted the footage, and with the owner’s permission re-packaged it and posted it to the main GoPro account. Currently the video sits at just under 30 million views.

With this video, GoPro expanded the idea of what their product was for. It could highlight instances of everyday heroism, not just extreme-sports hedonism. They were able to tell a compelling, human story that reached a wider audience than their usual fare.

With the advent of content marketing, brands suddenly had to become publishing houses. Will video marketing turn every brand into a Hollywood studio?

Probably not. You don’t need a whole film crew to make most of the videos on this list. Keep your content relevant, customer-focused, and entertaining, and you won’t need Michael Bay-size budgets to excel.

Want to learn more about content marketing strategy? How can we help?