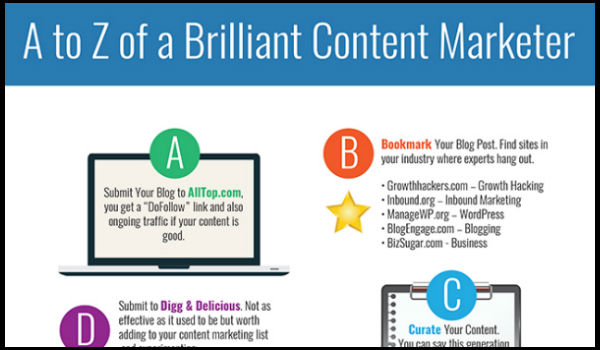 A to Z of Content Marketing: A 40 Point Checklist [Infographic]
Creating great content and getting it in front of the right people is harder than it may sound. This fun infographic shows the A to Z of great content marketing, including curating relevant content, having a solid strategy, and social media recommendations. PageTraffic

Native Advertising Dominates Facebook Audience Network (Study)
A new study from Facebook and IHS showed that 83% of Facebook ads use their native advertising format. Facebook also admitted in an email to SocialTimes that “the percentage of apps using the native ad format on Facebook Audience Network has increased tenfold since the first quarter of 2015, and that CPMs (cost per thousand impressions) for native ads are seven times higher than those for banners.” SocialTimes

Google tests displaying review snippets in the local 3-pack
We’re all pretty accustomed to seeing star ratings in Google’s local 3-pack. Now, Google is testing adding review snippets to those listings. The reviews are reportedly selected randomly and not chosen due to a reviewer’s history or credibility. This, of course, begs the question of whether or not these reviews will be moderated for content, or if obscenities and other inappropriate review language will be included. Time will tell! Search Engine Land

Facebook Benches Itself in Bidding for NFL Livestreaming (Report)
Facebook has pulled itself out of the bidding for NFL live streaming. The reported reasons for this decision are that Facebook prefers for its content to remain commercial free, which NFL games certainly aren’t, and the early start times of the London game. Facebook has left the running to Verizon, Yahoo, and Amazon, according to reports. SocialTimes

Introducing New Ways to Create, Share and Discover Live Video on Facebook
On Wednesday, Facebook announced changes they’re making to their Live Video capability. These changes include the ability to go live in Facebook Groups and Facebook Events, Live Reactions that use the same reactions launched in the News Feed, where “viewers can select Love, Haha, Wow, Sad or Angry, and the reactions animate right on top of the video,” and the ability to send an invitation to a friend to watch the live video with you from the video itself. Facebook Newsroom

Medium wants to be publishers’ digital printing press, too
Medium announced on Tuesday that like “WordPress, Medium will let publishers use its publishing tools to post content — but to Medium sub-domains, not their own domains — and customize the look and feel of those sub-domains. And like Facebook and Twitter, Medium is pitching publishers on the notion that their content will appear in the content feeds that serve as Medium’s home page and that people will be able to comment on their content within Medium.” They’re also offering ways for publishers to make money, including hosting branded posts and allowing publishers to ask for monthly subscriptions. Marketing Land

Stay tuned, because next week I’ll have more news stories for your reading pleasure. If reading blog posts isn’t your bag, you can always check out our mini-news video starring the talented Josh Nite and yours truly. Have something to add? Tweet me at @Tiffani_Allen or @toprank!