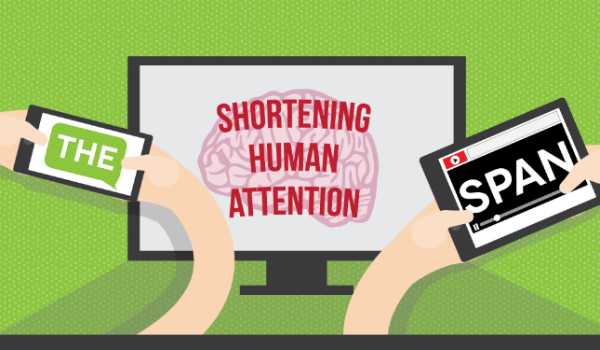 The Shortening Human Attention Span (And What it Means for Marketers) [Infographic]
Down from 12 seconds in 2000, the average human attention span is now 8.25 seconds. That leaves marketers with very little time to make a meaningful impression. But, don’t sweat it too much. This infographic has some solid tips on how to capture and hold the attention of your audience, like using clear and brief messaging and telling your audience a story. Social Media Today

Starbucks launched its own keyboard app so you can text emojis of unicorns drinking coffee
Starbucks is now allowing users to send unicorn and coffee emojis to their contacts. That’s it folks, the world is complete. The app was released under a partnership with Snaps Media, and is Starbucks’ first consumer app that is focused on entertaining their audience. What could this mean for other brands? I’m willing to bet we’ll see more custom emoji keyboards in the near future. TechCrunch

Facebook’s mobile ad revenue grew by 76% to $4.26 billion in Q1 2016
Facebook reportedly grew revenue in Q1 of 2016, which is a contrast to reports issued by Twitter and Apple with revenue reportedly being less than expected. Not only is mobile ad revenue up, but Facebook’s daily audience grew by 16%, with money made from each audience member increasing by 33%. This post is full of useful information from that report, and some highly entertaining gifs to boot. Marketing Land

Twitter Q1 2016 Revenue Falls Short of Analysts’ Projections
Twitter reported that while revenue was up 36% YOY for Q1, the $595 million fell short of analysts predictions. According to SocialTimes, “Twitter reported a GAAP (generally accepted accounting principles) net loss of $80 million, or 12 cents per share, less than one-half the company’s net loss in the first quarter of 2015.” SocialTimes

Marketers Choose Responsive Email Templates Over Fluid Hybrid Design
New research shows that marketing professionals worldwide are overwhelmingly choosing to use responsive email templates (56.9%) over fluid hybrid design (7.9%). Interestingly, 19.9% are using both types of templates, and 15.2% aren’t using either. Designing for mobile first may sound like a trendy marketing idea, but smart marketers know that if your emails don’t look great on mobile, they aren’t nearly as effective. eMarketer

I’ll be back next week with more online marketing news! In the meantime, send your thoughts and ideas to me @Tiffani_Allen or @toprank!