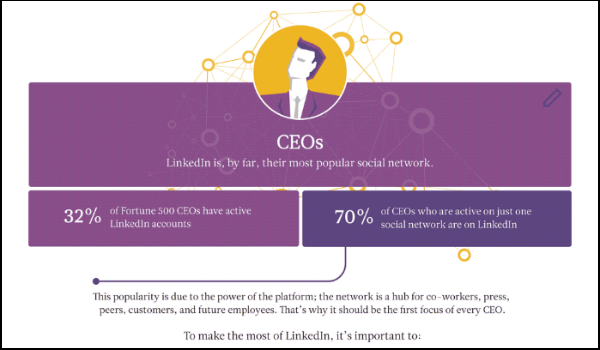 3 Things Every CEO Should Do to Succeed on Social Media [Infographic]
This new infographic from MDG Advertising illustrates three simple rules for CEOs on social media: Start with LinkedIn, pick a few networks outside of LinkedIn and stick with them, and avoid being boring. Why should CEOs be on social media in the first place? It gives the organization a human face, and it’s a great way to positively impact a company’s reputation. MDG Blog

Influencers: Instagram Is the Most Engaging Platform (Report)
A new report shows that 60% of influencers consider Instagram to be the most effective platform for engaging with their audiences, while only 18% said Facebook was the most engaging. The same study showed that 34% of influencers didn’t think that brands had a realistic understanding of the costs of influencer marketing. SocialTimes

How to Outperform Fortune 500 Brands on Instagram [Research]
Content Marketing Institute analyzed a year of Instagram content from Fortune 500 companies and found four key takeaways: The most engagement is between 10pm-3am Eastern for F500 brands, F500 companies are posting mainly on weekdays but Sundays see the most engagement, pre-editing photos to post on Instagram isn’t a good idea and use hashtags and question marks rather than exclamation points. Content Marketing Institute

Marketers have high hopes for automated content
“In a poll conducted to accompany the ClickZ Intelligence Digital Trends 2016 report, nearly a quarter of respondents identified content marketing as the key trend for their company this year.” However popular, ClickZ also found that the majority of companies surveyed didn’t have a dedicated content marketing team. ClickZ

3 Billion Shares: What We Learned from Analyzing the 1 Million Most Shared Articles from December 2015 to June 2016
Fractl and BuzzSumo paired up to analyze the 1 million most shared articles in the first six months of this year, and the results are enlightening. For example, Facebook accounts for 90.2% of social shares, and only 14 publishers averaged 5,000 or more shares per article. Fractl

Twitter Is Now Letting Brands Sponsor Its Emoji-Like Stickers
According to AdWeek, “In June, Twitter launched stickers that let users overlay searchable emojis and graphics on top of their photos. Now Pepsi is the first to launch a paid ad campaign using the visuals.” However, it’s not immediately clear how promoted stickers are sold. AdWeek

After redesigning Discover, Snapchat finds viewers grow but engagement drops
About two weeks after Snapchat launched their new Discover section, publishers are seeing an increase in overall viewers, but a drop in total views, completion rates and time spent per user. Publishers are also noticing that viewers are opening editions and only viewing the cover article, resulting in a 28% drop-off after the first snap vs. 13% prior to the redesign. Digiday

I’ll be back with my lovely co-host, Josh Nite, next week with more online marketing news. Have something to share? Tweet me @Tiffani_Allen or @toprank.