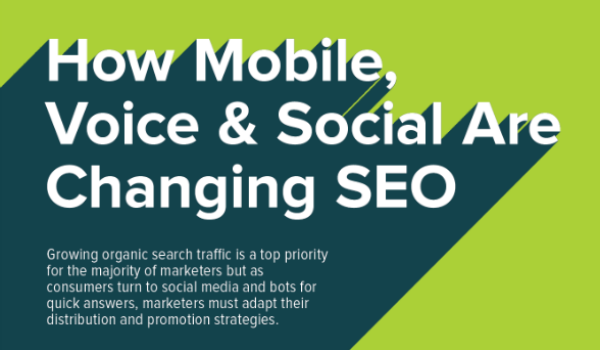 How Mobile, Voice & Social Are Changing SEO [Infographic]
With SEO being a growing area of investment and interest for digital marketers, we tend to keep a very close eye on any changes that may affect organic search visibility. So how are mobile, voice and social changing SEO? HubSpot’s latest infographic, based on their State of Inbound Marketing report, has the details. HubSpot

The Science of Content: TFM Research Report On Content Across 10 Industries
Technology for Marketing just released a new study of content that resonates across 10 different industries. The report found, among other things, that understanding your specific industry and audience is the key to successful content. This means knowing what type of content they like best, the best time to post, and even what headline words will get their attention. Buzzsumo

Is Facebook Live Coming Soon to Desktop?
What originally rolled out for only mobile may now slowly be rolling out for Desktop — Facebook Live. Users have reported the added functionality this week, with the biggest reported difference being the addition of a comment bar for the broadcaster. It was also reported that screen sharing wasn’t available but the interface resembled a Google Hangout. Search Engine Journal

Twitter’s new, longer tweets are coming September 19th
Social media marketers, rejoice! The Verge reports that Twitter’s long rumored exclusion of links and images from their character counts is happening on Monday. This will also include videos and user polls along with user names at the beginning of replies. The Verge

A Snapshot of the World’s Ad Spend
Direct Marketing News reports: “Global advertising spend is projected to reach $548.2 billion by the end of this year—a 4.4% (or $23 billion) increase compared to 2015, according to a recent report by Carat. The global media network expects this figure to rise to $570.4 billion (a 4% year-on-year increase) in 2017.” Direct Marketing News

Which Marketing Channels Have the Best ROI Measurability?
Marketing executives surveyed by Millward Brown are saying that two marketing channels are easiest to measure in terms of ROI — email and search, with online ads coming in third. MarketingProfs also reports that nearly “74% of executives say they would increase spend on digital channels if it were easier to track ROI; 71% say they would increase cross-channel spend if ROI measurement were easier.” MarketingProfs

Ad Tech Companies Are Testing New Formats Like Virtual Reality and 360 Video
Brands like Jack in the Box, AOL, The New York Times and Vice are experimenting with virtual reality, and are reportedly happy with the results they’re seeing. With video becoming increasingly effective as a tool for marketers, 360 video and virtual reality are adding a new, immersive dimension that may prove to captivate viewers in new ways. AdWeek

Many Visitors Abandon Mobile Sites If Load Time Tops 3 Seconds
MediaPost reports: “Google’s latest study — The Need for Mobile Speed — found 53% of mobile site visits are abandoned if pages take longer than 3 seconds to load. One out of two people expect a page to load in less than 2 seconds. The data is based on analysis of more than 10,000 mobile Web domains.” Is your website up to speed? MediaPost

Snapchat Has Nearly All the 18-to-25-Year-Olds It Will Get, but Older Users Still Joining
Smartphone users are spending 87% of their screen time in mobile apps. While there are some apps that are used the most frequently, like Facebook and Pandora, Snapchat has seen the most growth with up to 55% of users app time, beating out Pinterest for the number 13 spot. While the Millennial market may be fully saturated, ComScore indicated they still have a large opportunity with the 35 and older market. Ad Age