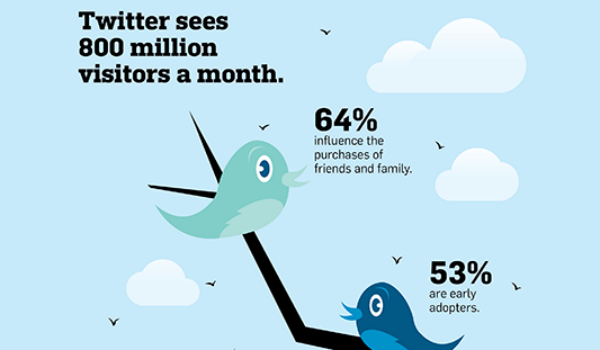 Infographic: Latest Twitter Study Sheds Light on Just How Well Video Is Doing
Based off of Twitter’s annual Online Video Playbook, this infographic shows what’s cleverly referred to as ‘The Bird’s Eye View of Video’ on Twitter. For example, 93% of the video views on Twitter are on mobile. Users who watch video want breaking news, information, and viral content the most, followed by entertainment and celebrity content. AdWeek

The FTC Is Skeptical When Celebrities Are Paid to Like Your Product
The FTC is investigating a few big name brands for bending the rules that govern paid celebrity endorsements. Of course, rules regarding endorsements from celebrities aren’t news to marketers, but the onset of digital marketing did prompt new rules and regulations. The one thing that hasn’t changed? Disclosure. Entrepreneur

Facebook Set to Launch ‘Facebook at Work’ Next Month
Facebook is launching ‘Facebook at Work’ — a private network for your business — in the next three to four weeks. This will allow inter-office communication in a known format for larger, or even smaller, organizations. The network exists separately from personal profiles so there’s not as much temptation to use personal Facebook during work time. Social Media Today

Snapchat reveals its $130 Spectacles and rebrands as Snap Inc.
Snapchat revealed Spectacles, a $130 pair of sunglasses with a 115-degree lens camera. According to The Next Web, “content recorded using the glasses is automatically pushed to the Memories section of the Snapchat application in a new circular video format — which can be played full screen in any orientation — via Bluetooth or Wi-Fi.” The Next Web

Salesforce, Google, Microsoft, Verizon are all eyeing up a Twitter bid
TechCrunch reports: Twitter continues to inch its way to a sale process, and the latest developments come in the form of alleged bids from potential buyers … we have also independently heard that both Google and Salesforce are interested in buying the company. We have additionally heard that Microsoft and Verizon have also been knocking.” What, if anything, could this mean for Twitter marketing? TechCrunch

Facebook Allowing Advertisers to Create Rules for Turning Off Ads, Email Alerts
According to recent information submitted to SocialTimes, “Facebook appears to have given advertisers the ability to establish rules to automatically turn off ad or send email alerts once certain criteria are met.” The report comes complete with screenshots for reference, we’ll have to keep an eye out for this developing story. SocialTimes