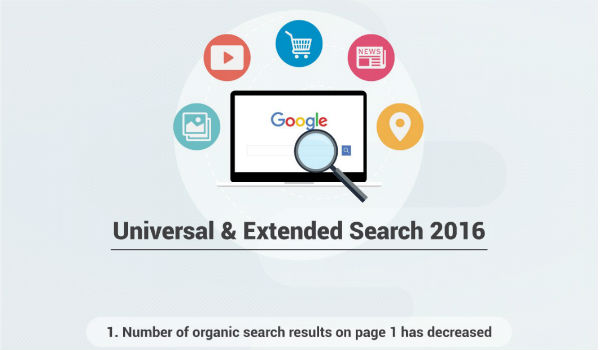 How Google Search Has Changed in 2016 [Infographic]
As we all know, Google is no stranger to change. Keeping track of those changes and their connotations is an actual full time job. For example, MarketingProfs reports “Google’s search engine is displaying fewer organic results on it first page this year than it was last year, and it’s increasingly presenting different experiences for desktop and smartphone users.” MarketingProfs

What Marketers Need to Know About How Today’s Top Social Platforms Measure Video
Recently Facebook revealed that the reported amount of time users spent watching a video could be inflated by up to 80%. This has cracked open a conversation about standards of industry measurement among video advertising platforms. Since these metrics vary by platform, it’s important that advertisers understand just how they’ll be charged. Read on for a full breakdown. AdWeek

Google Panda demotes or adjusts your rankings down — it does not devalue
Gary Illyes from Google explained that unlike Penguin 4.0, Google Panda actually adjusts the rankings down of ‘spammy’ sites. He told Search Engine Land: “… it is an adjustment. Basically, we figured that site is trying to game our systems, and unfortunately, successfully. So we will adjust the rank. We will push the site back just to make sure that it’s not working anymore.” Search Engine Land

Google Focuses On Mobile-First Indexing, Adds News Fact-Check Tag
Google is finding yet another way to differentiate quality content for users. MediaPost reports: ” Google said it will add a Fact Check tag to articles it indexes that points readers toward articles validating or discrediting claims. The engine already flags content with tags such as In-Depth, Highly Cited, Local Source, and Opinion.” MediaPost

Pinterest Is Working on a New ‘Explore’ Section for Publishers, Brands
Pinterest is rumored to be testing what’s essentially a sponsored page for brands that allows for multi-media content, even video, to be published and promoted. Pinterest has been criticised in the past for a lack of innovation in their advertising platform, so this may be a first step toward becoming competitive with other ad platforms, like those of Snapchat and Instagram. Advertising Age

SEO & SEM Ranks 9th on LinkedIn’s Top Skills List
LinkedIn (client) has released new data that reveals the top skills of 2016, with SEO and SEM ranking at number nine. While that’s a bit of a drop from their 2015 positions, those skills are still among the top ten. And while LinkedIn data shows that demand for marketing skills is decreasing due to more applicants with marketing skills being available, the data shows that marketing-related skills are very much in demand, but perhaps the face of marketing is changing. Search Engine Journal

I’ll be back next week with more online marketing news! Have something to share? Tweet it to @toprank or leave me a note in the comments.