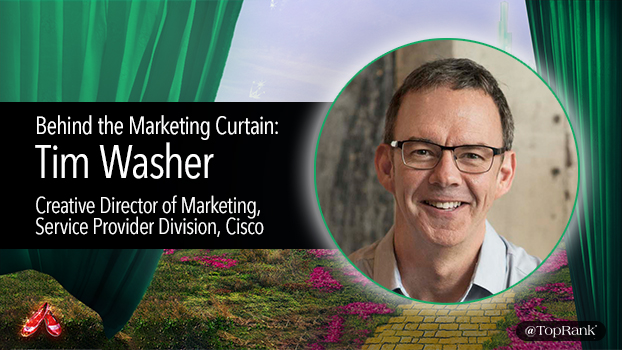 As we marketers long to make meaningful connections with our audience, we often look deep into our figurative crystal balls in hopes of finding a way to lay an irresistible field of content that will trap their attention. Unfortunately, we can end up putting our audience to sleep—leaving the door open for more colorful characters to swoop in and carry them away.

So, how can we take to the sky and get our audience to surrender to our content? By crafting a  narrative that has empathy, humility and wit. And there’s certainly no better person to look to for inspiration than comedic treasure Tim Washer, Creative Director of Marketing for the Service Provider Division for Cisco.

As part of our Wizard of Oz-inspired Behind the Marketing Curtain interview series, today we’ll pull back the fabric and get to know more about how Mr. Washer arrived in the wonderful world of marketing, and share insights that can help you harness the power of comedy to humanize your brand and connect with your audience.

The Man Behind the Curtain 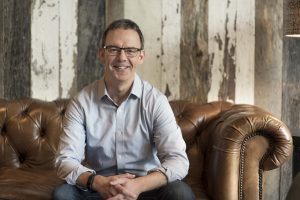 Tim grew up in Houston, TX and attended college at Texas A&M University, majoring in—you guessed it—marketing. But after graduation he took a sales job at Xerox—which was certainly not in his original plan.

“As I was getting close to graduation, there was one thing I knew I didn’t want to do: work in sales,” Tim recalled. “But as I was looking at marketing jobs, most open positions seemed to be promotional jobs—and I wasn’t turned on by that.”

“Then a professor of mine mentioned Xerox, and said their sales team was rated No. 1,” he added. “So, then I thought: ‘Why not start there?’ This seemed like the perfect opportunity to get a better idea of how customers think and what their needs are, which is essential in marketing. It was a total one-eighty for me.”

After snagging a meeting and shadowing someone for a day, Tim landed the gig at Xerox—laying the foundation for what would be a long career in the software and technology space. A few years later, he went back to school to get his MBA. Then, in the late 1990s, he made his way to New York City and has been there ever since.

But shortly after his move, Tim realized he wasn’t exactly working in his calling.

“What I really enjoy doing is comedy and improv, and making people laugh,” he said. “That’s where I feel at home. That’s my Kansas.”

As it stands today, Tim has been able to merge his practical sales and marketing experience with his true passion. As previously mentioned, he’s currently Cisco’s Creative Director of Marketing for the Service Provider Division, and specializes in corporate humor and video content. Here’s a little taste of his work:

Prior to Cisco, he spent about six years doing similar work at IBM. In addition, he’s still active in the comedy arena, with writing and acting credits for his work on Saturday Night Live, Conan, The Onion, and Last Week Tonight with John Oliver.

But how exactly did he get here? We’ll get to that in the next section.

Like Dorothy Gale, an unexpected twister hit Tim without warning, sending him on a long and winding path.

It was the season of Lent, and Tim said he was thumbing through a devotional guide that his church— Fifth Avenue Presbyterian—had created for the season.

“In there, I saw a Frederick Buechner quote that said: ‘The place where God calls you is the place where your deep gladness and the world’s deep hunger coincide,’” he recited. “And there were a series of reflection questions, the first one was: ‘What is your spiritual gift?’”

For Tim, that answer was easy. It was making people laugh—but he asked around just to make sure others felt the same way. But it was the next question that sealed his fate.

“The question asked: ‘How good of a steward are you being to this gift?’” Tim explained. “And at that moment I had this feeling of obligation come over me. I realized it was no longer a choice. It wasn’t something I wanted to do—it was something I had to do. I was going to be a comedian.”

#Comedy wasn't something I wanted to do. It was something I had to do. @timwasher Click To Tweet

After that, Tim joined the Upright Citizens Brigade (UCB) in New York City, and studied improv under the incomparable Amy Poehler. She actually helped him get one of his first big breaks—writing for SNL.

“She was extremely influential and helpful,” Tim said, likening her help to the kind Dorothy received from Scarecrow, Tinman and Cowardly Lion.

He had a few other trusty helpers along the way, too, including Tony Hale, known for his role as Buster Bluth on Arrested Development and Gary Walsh on Veep, as well as film director Scott Teems.

“Scott is without a doubt one of the most influential people on my career,” Tim said. “When I pitched my first comedy video to IBM, I didn’t have any budget, but I called him up and he worked with me on it. And they loved it. He’s been a dear friend, and whenever he’s available I ask him to work with me.”

Nearly two decades later, and several of his signature and wildly successful PowerPoint bits later, Tim has carved out a unique career niche for himself and he’s turning out award-winning corporate work.

Without further ado, let’s dive into Tim’s tips and insights for infusing comedy into your marketing strategy.

That’s a horse of a different color. How can comedy and content come together to create a unique audience experience and bolster brand voice?

Comedy is the most powerful way to humanize a brand because it demonstrates empathy. Let’s face it, a lot of true comedy comes from pain. So, when we can come out and touch on a customer pain point, we show them that we understand their point of view. When we do something that is self-deprecating, when we look vulnerable, and when we let our guard down a little bit that’s when we make a connection.

These days, there’s so little content out there that truly connects with people. So often we start off with a good idea, it goes through a committee where everyone wants to have a say in something, and the idea begins to soften. Then you end up with the lowest common denominator of something safe.

If you can make someone laugh, that is the most intimate connection you can make. @timwasher Click To Tweet

The Wicked Witch was defeated with just a pail of water. What creative tactics and tools can marketers use to create an engaging video experience?

If you’re going to do comedy, it’s critical to get a comedy writing and a video production team that are experienced with producing comedy. One of the biggest mistakes people make is saying: “Let’s make a funny video. Our in-house video guy can probably do it.” But when it falls flat, they often think comedy just doesn’t work for their brand.

Comedy is very much a social sport. You need to have a partner with the right chemistry, and someone to bounce ideas off—and someone to tell you when something just isn’t funny. This dramatically enhances the work.

As a more general rule for creating great video, you need to be able to tell a story—a story that doesn’t focus on hitting all your product talking points. For example, we did a mini documentary for Cisco that showed how smaller service providers are serving third-world countries. It focused on how our customers are making a difference, and of course inferred that our technologies are helping them make that difference.

If you want to add #comedy to your #marketing, get an experienced team. @timwasher Click To Tweet

Dorothy’s ruby slippers were the key to achieving her end goal of returning home. How can marketers leverage their existing resources to unlock creative video content ideas?

These days budgets are being cut, yet we still need to produce more content. So, we need to transition from marketers to content creators—and those are two very different skillsets. But the bottom line is that you need to focus on telling the story.

Get away from the product and focus on finding out how people are actually using your product or service. Ask yourself what people want to watch. Ask yourself how you could make something visually interesting and compelling. If you don’t have a big video budget, invest in a cheap light, tripod and camera, and start shooting. Make 10 videos, and then publish the 11th one. Once you get comfortable with it, great things can happen.

Good witch or bad witch? What’s a bad habit all marketers should drop?

Letting fear have too much influence over their decisions—and dropping this habit certainly requires some deep personal reflection. Ask yourself how does fear hold me back in my job? Is it a risk-averse boss? Is it fear of failure? You need to figure out how fear is impacting you right now, in this very moment. Then you can start to find solutions to work around it.

Ask: How does fear hold me back? Once you figure it out, you can look for solutions. @timwasher Click To Tweet

Well, I’d always ask for more budget. But I’d also ask for a committee of “yes” people. Those who are more open to risk-taking. I’m fortunate to work for a company that is open to all of that, and wants to be leaders in the creative space and embrace risk-taking.

We’re Off to Meet More Wizards

I’d like to sincerely thank Tim for taking the time to open up about who he is, where he comes from and how he approaches content and comedy. Thank you so much, Tim.

Of course, TopRank Marketing’s journey to Emerald City is still underway. In the coming months, we’ll be bringing you more exclusive interviews and insights from industry wizards to add some smarts, heart and nerve to your marketing efforts.

Stay tuned for our next installment, my pretty!

What’s one thing you’d ask the all-powerful marketing wizard for? Tell us in the comments section below.