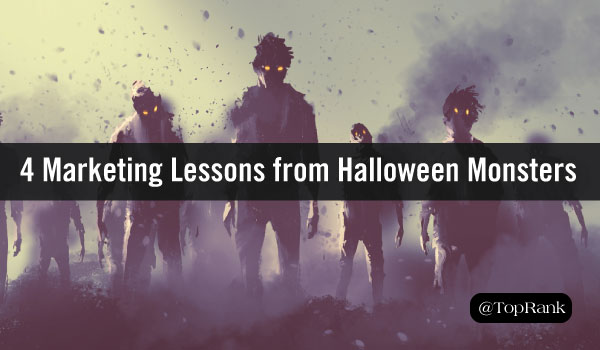 Halloween is objectively the best holiday of the fall-winter season. You don’t have to go broke buying people gifts. You don’t have to cook an enormous meal (then pass out after gorging on turkey). The only obligations for Halloween are to play dress up and eat candy!

Not to mention I’m somewhat partial to the holiday’s aesthetic. Give me skulls and bats over tinsel and garland any day of the week, and twice on Friday the 13th.

Sure, there’s a horror/scary element to Halloween. But it’s a fun, safe kind of scary. If you’ve spent an hour on social media recently, you know there are scarier things than ghoulies and ghosties.

But Halloween isn’t just fun. It’s educational, too! I realized this year that some of my favorite Halloween monsters are hiding valuable lessons for marketers. For example…

Count Dracula is often romanticized as a solitary figure, brooding in his castle. That image couldn’t be further from the truth. He’s constantly making new friends—and making those friends into vampires. The way Dracula builds a relationship is a solid lesson in influencer marketing.

Drac doesn’t just meet someone and immediately offer to make them immortal. He starts by getting to know them socially and paying them visits. Then he invites them to become a thrall, feeding on insects and getting a taste of the vamp life. Finally, when the relationship is mature, he converts them into full-fledged creatures of the night. It’s an easy sell by then, because he didn’t skip any steps in the relationship.

I don’t recommend making your influencers eat bugs, of course (unless they happen to enjoy doing so). But you should build relationships with influencers over a series of small, incremental steps. Start by socializing and promoting them, then ask for a small content contribution, and finally move on to co-creating together.

#2: Dr. Frankenstein Is Great at Repurposing

If you ask me, Dr. Frankenstein (the scientist, not his monster, of course) gets a bad rap. Yes, he took his research a little too far. Sure, he was a bit of an amoral lunatic. Okay, so he tampered in God’s domain a little. But you can’t deny that he got results!

In real life, after the hullabaloo died down, scientist would be scrambling to corroborate and replicate his findings. Frankenstein’s monster 2.0 and beyond would be far less “shambling horror” and more “hey, we finally beat death!”

Where others saw a pile of discarded body parts, Dr. Frankenstein saw the potential for new life. When we’re looking at a content calendar, we should be following in his footsteps. Repurposing content—up to and including stitching parts of old posts into a new one—can bring your old content to a new audience with a minimum of effort.

Quick: What’s the wolfman’s biggest problem? No, it’s not that he’s vulnerable to silver. It’s not even that he turns into a brainless monster every full moon.

No, what always gets the wolfman in the end is his failure to plan ahead. He always ends up roaming the countryside chowing down on rabbits, and then someone sees him, and then out come the silver bullets. If he were to approach the problem strategically, he could spend each wolf session safely locked in a basement somewhere. He could live a full life 28 days out of the month, and no one would ever know he had a lycanthropy problem.

If you’re creating content without a content strategy, you’re practically begging the townsfolk to load up on silver buckshot. You may score the occasional win—like the wolfman gets a rabbit or two—but on the whole, it’s counter-productive. Plan your content in advance, with a rationale, research, and an amplification plan, and your content is far more likely to have a long and prosperous life.

Just how far would you go to get inside someone else’s head? You might walk a mile in their shoes, as the cliché goes. But honestly, how much can you know about someone just by borrowing their footwear? By that logic, every time I went bowling I’d learn about hundreds of people.

Dr. Jekyll takes empathy to the next level. He transformed himself into Mr. Hyde to learn exactly how a monster thinks. Granted, the experiment didn’t end well, but the lesson is still valid.

Marketers don’t have to undergo a monstrous physical transformation to feel empathy, of course. But we should be striving to learn as much about our audience as we can. That means learning about them beyond their interactions with the brand. The more we can use data to truly know our customers, the more relevant our content will be.

Sociologists and anthropologists would say that the monsters we create in folklore and fiction survive because they are a reflection of our deepest fears. For example, the wolfman is about loss of control, fearing the beast within us all. Dracula is about the fear of death and disease—and of creepy old guys lurking in castles.

I would argue that these monsters have such enduring power because at the heart of each story is an eternally relevant marketing lesson. Stay tuned for my next horror story, “The Beast that Wouldn’t Stop Sending Boilerplate Sales Emails.”

Is your skill at creating awesome content almost paranormal? Are you terrifyingly good at account management? TopRank Marketing is hiring.