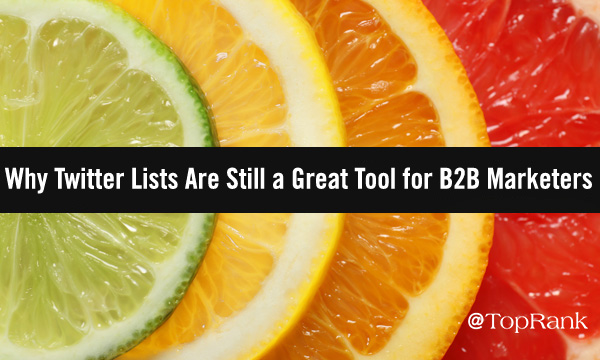 B2B marketers can benefit in numerous ways by taking full advantage of the power of Twitter lists. Whether it’s showing respect for and nurturing prospective clients, engaging current clients and fans, or helping to build trust in marketing, smartly putting Twitter’s many list features to use offers potentially large and oftentimes overlook advantages.

Why should B2B marketers care about using Twitter? Here are some recent statistics:

Twitter lists can help you from being overwhelmed by a constant bombardment of tweets from all your connections, allowing you to focus on specific interests, and unlike your primary Twitter feed with its algorithmic feed, lists generally show everything from the accounts you add to them.

Twitter lists are a great way to get to know the businesses and individuals who are experts in particular areas, whether it’s B2B influencer marketing or any number of topical interests.

Creating Twitter lists is straightforward — just select your account’s profile photo and choose the “lists” option. Build as few or as many lists as you wish, and consult Twitter’s official list help system if you get lost.

One of the most frequent concerns among those new to Twitter lists is whether people or organizations will know if you’ve added them to a private list, and luckily this is not the case. You can safely add Twitter accounts to your private lists without worrying that a competitor will be notified or be able to see that you’ve placed them on a particular list.

Twitter users are notified if you add them to a public list, however, and this can be a fantastic opportunity to show clients, fans, or prospective businesses that you are actively interested in what they’re doing on Twitter. Seeing a notification that a favorite firm or influential person has added you to a list called “Must-Follow Rock Star Influencers” can help build trust and good-will, and open the door to further communication.

Some use great numbers of Twitter lists granularly broken down into many categories, while others prefer to keep it simpler, and use only a few lists. Taking an example from the world of family history genealogists and the many sources they cite, this distinction is referred to as “lumpers versus splitters,” and applies to Twitter lists too.

Keep in mind that if you create 200 separate Twitter lists, although each may be hyper-specific in its member accounts, maintaining and using so many lists will require extra time and effort. Whether the additional work is worth it depends on how much time you have to dedicate to Twitter lists, as well as your organization’s personal preferences.

Many people create a private or public Twitter list of people they’ve met in person, and others also have lists of the people they hope to someday meet. Other helpful common uses of Twitter lists include setting up lists for professional contacts, family members and relatives, and locality-based lists of relevant people in your city or neighborhood.

The list feature has been around since 2009, and over the past decade it may have fallen off the radar of some marketers, however the advantages lists offer are as important and relevant today than ever. Here are some of the many ways Twitter lists can be used.

Depending on your company culture either private or public Twitter lists can be created to help monitor and nurture prospective clients. Monitoring Twitter lists already built and maintained by others can in some cases also help when it comes to finding potential new clients

Marketing speaker Brian Fanzo of iSocialFanz maintains a Twitter list of more general topics such as “Social Media Must Follows,” containing more than 850 social media industry professionals, which has been subscribed to by over 100 people. Seeing who is subscribed to such a Twitter list can also be a good way to find relevant new contacts for your business or organization.

Twitter lists make it more convenient to nurture clients and individuals, and to help build trust in your marketing prowess. Earning trust through relevant Twitter conversations can help combat a decline in credibility marketers have faced, as our TopRank Marketing CEO and co-founder Lee Odden recently explored in detail in “Trust in Marketing is at Risk. These CMOs and Marketing Influencers Share How to Fix.”

“Everyone in the marketing world has an opportunity to take a step back from the information overload and pressures of output on a daily basis to be more thoughtful about the marketing they’re doing.” @LeeOdden Click To Tweet

Twitter lists can help combat that sort of information overload, while also offering great opportunities to boost engagement within your professional marketing communities.

Some businesses and individuals publicly reach out on social media seeking to find new people or organizations to add to their Twitter lists, with calls of “Are you a B2B marketer with a particular interest in blockchain [or whatever specialty the list encompasses]? We want to put you on our Twitter list!”

Twitter lists are their own branch of customer care, and can be an important part of how brands interact. Our own Senior Content Marketing Manager Caitlin Burgess has explored this in “7 Examples of Brands Mastering Twitter for Social Customer Care,” featuring Amazon, UPS, Starbucks and others.

Some marketers like to take photos with people they meet at networking events and elsewhere, and then add them to a special Twitter list just for their select group. Samantha Kelly of Tweetinggoddess does this, and has created over 140 Twitter lists, organized by various conferences.

During my decade as Lead Editor at the Pubcon series of conferences we regularly created Twitter lists containing the speakers at each event, and also a general list of Pubcon Speakers Past and Present.

The Content Marketing Institute maintains Twitter lists for its upcoming conferences, Twitter chats, and also has special lists for contributors to its blog, and even a “Meet Our Team” list to see what its members are tweeting.

Not only conference organizers maintain Twitter lists, as fans and third-party businesses who may be sponsors, partners, or exhibitors also keep such lists. For the massive 17,000+ attendee Adobe Summit* event, customer relationship management company Nimble created an Adobe Insiders list, including all of the people from the Adobe Insiders initiative — including our CEO Lee.

Some marketing industry speakers have even curated lists of both the speakers and most of the attendees in their sessions, such as Chris Strub, CEO at I Am Here, who along with Lee and Samantha is featured on our 2019 list of the top 50 social media marketing influencers.

If you were in my #SMMW19 session — in the room — I’ve curated a Twitter List of everyone who was there. If you’re not on it, let me know …

Ian Gertler, founder and CMO at Symplegades, maintains over 40 Twitter lists including “Top CMOs,” “Blockchain,” and his own 100-plus-member Adobe Summit 2019 list.

Many firms also use private Twitter lists to help segment and organize their various teams.

These days, whether utilizing existing Twitter lists or creating your own, the focused information contained within certain tweets of key industry professionals can prove invaluable, so taking some time to learn and regularly use Twitter lists for gaining competitive intelligence is more important than many people may think.

Twitter lists are only one of many tools smart marketers use while conducting such research. Our Content Strategist Anne Leuman recently explored several other top methods in “7 Efficiency-Boosting Martech Tools & Platform Features B2B Marketers Need to Consider.”

“New marketing tools and features are being constantly released, and it’s up to you to evaluate them to see if they’re a good fit for your team and your overall marketing goals.” @annieleuman Click To Tweet

Some use Twitter lists to keep track of funding sources such as various venture capitalist organizations and individuals.

When it comes to Twitter lists your own creativity and ingenuity are the only boundaries, so use the ideas we’ve presented here and a jumping off point to take a fresh look at your own Twitter list strategy.

Be sure to join our CEO Lee Odden today at Content Marketing Conference 2019, as he shares 10 exercises to build your marketing beach body, or if you can’t make it to Boston, follow along on Twitter using the #CMC2019 hashtag..