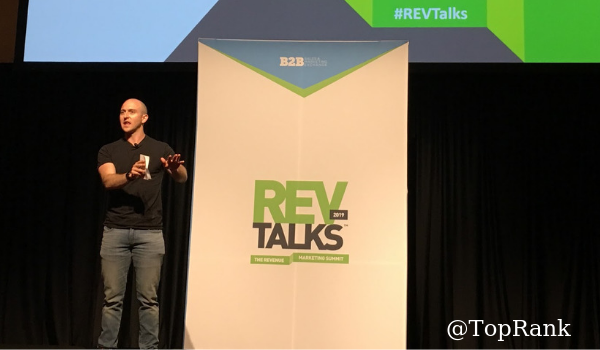 The 10 Commandments of Modern Marketing

1. It’s never too early to start marketing, ever.

Ever see a construction site for a residence that won’t be finished for four more years? Did you notice the sign advertising the future apartments or condos? Dave references this as an example of getting out front with generating awareness.

“There’s too much noise and competition,” he argues. “You can’t think you’re just gonna show up and think people are gonna buy. Start as soon as you can.”

2. You must build an audience.

And you should do it in a way that has nothing to do with your product or service. This is a fundamental aspect of content marketing that unfortunately tends to get overlooked. People don’t want to subscribe to a podcast or YouTube channel that’s just trying to sell them something. Create things for people who are at least somewhat related to your business, and make sure it provides them with real value.

3. You have to use social proof anytime you do anything in marketing.

Customers are growing more skeptical and leery of brand promotions all the time. Even case studies don’t have the impact they once did, because – as Dave puts it – “they know a marketer wrote it, and then got approval from a customer.” Today’s audience wants to see what people are buying and using, so leverage your customers’ own words in the form of screenshots from review sites such as G2 Crowd, or posts on Twitter and LinkedIn. Drift’s social proof repository exemplifies this approach.

Dave, you’re a man after my own heart. As an avid proponent of the written word and its enduring value, it was nice to hear such adamance of Mr. Gerhardt on the matter. If you haven’t, he suggests picking up a copy of Scientific Advertising by Claude C. Hopkins. It was originally published in 1923, but remains entirely relevant today. Why? Because it’s about writing influentially for human readers.

Copywriting is so powerful because it gives you the ability to sell without ever having to pick up the phone. @davegerhardt #B2BSMX Click To Tweet

5. There’s a story behind everything.

“There’s no boring products,” Dave opines. “There’s only boring marketers.” We as people are wired to engage with and remember stories. Not only is this format highly compelling, but as I’ve written before, storytelling also builds trust.

6. It won’t stick unless you name it.

Even the most interesting concept or idea will likely fail to gain traction if you don’t give it a name that people can associate with it. This is especially critical to creating a category. Dave emphasizes that you shouldn’t get too caught up on what the name will be – just make sure you have one. For instance, he says his team went back and forth endlessly on what to call “conversational marketing,” until they finally settled on the simple and straightforward eventual choice, which has since become an integral part of Drift’s brand.

7. You have to stand for something as a brand today.

The safe, conservative route of leaning toward neutrality and avoiding controversy no longer flies. In some cases, your brand’s stance can tie to more serious societal and political issues; Salesforce announced earlier this year that it would no longer do business with retailers selling semi-automatic weapons. But it can also be something less touchy, and more directly pertinent to your industry. Drift famously took a stand against lead forms and gated content, which were viewed at the time (and still are viewed by many) as mandatory elements of a results-oriented content strategy.

8. Creativity is a competitive advantage.

The rush amongst marketers to develop the most proficiency with tools and the biggest tech stack is misguided. “Marketing technology is table stakes,” Dave says. “Creativity is the variable for success today.” He adds that while many functions of these technologies will become automated, if they haven’t already, AI and machines will never replace creativity.

This makes some executives uncomfortable. There’s a prevalent concern that encouraging employees to develop their personal brands will make them more likely to get noticed and poached by competitors, or that these employees will say something that doesn’t jibe with the brand positioning. But Dave believes these are the necessary risks a modern marketing operation needs to run. “We all want to work with real people, we don’t want to work with logos.” Effectively engaging your team will make them more likely to be aligned with your company’s voice, and less likely to leave.

Or zig when they zag, if you will. Constantly trying to outdo or outspend your competitors in the same channels and tactics is a losing strategy, Dave says. “The best way you can compete in marketing is to stack the deck. Find the gaps. Go to where people are not today.”

Heed this Marketer’s Creed and Prosper

I’ve had the privilege of sitting in on many informative, eye-opening sessions at B2BSMX, but I think Dave’s will go down as my favorite. From the moment he took the stage, informing his audience that he didn’t have any slides and would be reading off a piece of paper because he had a baby eight weeks ago and has barely had a free moment since, the Drift marketer oozed genuine authenticity, and every one of his commandments resonated with me personally.

More objectively, given what he and his team have accomplished, it’s tough to argue with this set of guiding principles for the new age.

If you enjoyed this recap, make sure to check out the rest of our coverage from B2B Sales and Marketing Exchange 2019: