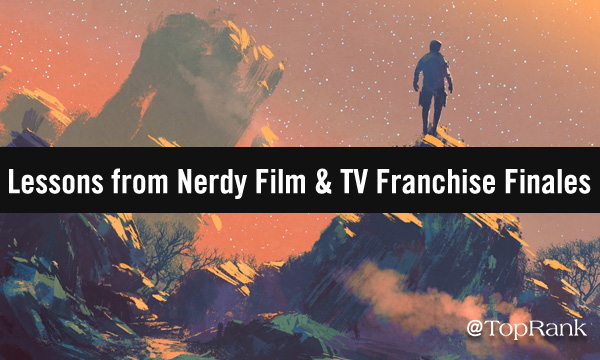 2019 may be remembered as the year we reached peak nerd.

When I was growing up in the ’80s and ’90s, nerd culture was still underground, something for weird kids and weirder adults. Now our biggest entertainment franchises are what used to be nerd stuff: High fantasy, epic science fiction, comic book heroe,s and horror movies.

But 2019 was the year that cracks started to show in even the most lucrative franchises. Several high-profile series came to an end — and only one of them really stuck the landing. Let us take solace in the words of Jedi Master Yoda himself:

Marketers can learn a lot from each of the year’s biggest nerdy swan songs.

(All opinions about nerd cinema are mine and not necessarily those of TopRank Marketing. I’m sure some of us loved the “Game of Thrones” finale.)

#1: Star Wars: Have a Plan and Stay Consistent

The first three “Star Wars” movies told a complete story with a beginning, middle, and end. The prequel series, for all its faults, did the same. But the final three movies don’t have the same consistency in narrative and purpose.

“The Force Awakens” hit the same plot beats as “A New Hope”, the 1977 original film. The sequel, “The Last Jedi”, threw away the rule book and aimed to surprise and challenge fans. Now the final entry is already being panned for returning to predictable fan service.

What happened? Disney didn’t have a plan for the entire trilogy. There was no one keeping the tone consistent across all three movies, no agreed-upon plot points or even an ending in mind. The result: A bumpy ride for the end of a 40-year franchise.

Every encounter with your brand should feel like it’s part of one ongoing story. That means coordinating your content marketing strategy between departments, and within your own team. It also means starting each campaign with a shared vision, shared objectives, and common KPIs across sales and marketing.

#2: Game of Thrones: Respect Your Audience and Don’t Rush It

The “Game of Thrones” series was a cultural phenomenon. It pulled in record numbers for HBO, inspired countless imitators, and was one of the most-watched (and pirated) series of the 2010s. It seemed impossible that the show’s creators could squander that goodwill…

Until the final season premiered. Longtime fans found the episode count reduced, the action rushed, and beloved characters reduced to caricatures. The plot seemed driven by an urge to finish up quickly than to provide a satisfactory resolution. Fans were furious, and even casual viewers could tell the difference.

Don’t put expedience ahead of experience. If you’re creating content just to fill the editorial calendar or hit a deadline, your audience will sense it. And they’ll move on to content that demonstrates care and understanding, rather than content for content’s sake.

Don’t put expedience ahead of experience. If you’re creating content just to fill the editorial calendar or hit a deadline, your audience will sense it. @NiteWrites Click To Tweet

In 2018, another decades-old franchise, “Halloween”, had a massive hit by bringing back the original cast for one more adventure. The “Terminator” series hopped on the trend, with a new installment featuring the original cast. But “Terminator: Dark Fate” bombed, with the lowest box office of the franchise so far.

It turns out, not every beloved franchise from the ’80s and ’90s has enough audience to support a $200-million new chapter.

Are you producing content that meets a verified audience need? Does it offer the best answer to their most pressing concerns? Or is it just hopping on the next shiny trend, seeking to duplicate another brand’s success? It’s worth asking these hard questions during the planning stages.

Fast-forward 20 years, and “X-Men: Dark Phoenix” closed the franchise with a whimper, both from critics and at the box office. What happened? Well, essentially, the entire Marvel cinematic universe.

Superhero movies evolved dramatically between 2000 and 2019. They got smarter, more engaging, better-acted and scripted, with more coherent, better-directed action sequences. “Dark Phoenix” would have been state-of-the-art in 2000, but it was jarringly unsophisticated to modern audiences.

Best practices in marketing evolve faster than mutant DNA. Don’t rely on the same old messages in the same few channels and expect your audience to respond with enthusiasm. Keep your audience research current, explore new ways to connect creatively, and keep track of what’s state-of-the-art.

Best practices in marketing evolve faster than mutant DNA. Don’t rely on the same old messages in the same few channels and expect your audience to respond with enthusiasm. @NiteWrites Click To Tweet

#5: Avengers: Practically Perfect in Every Way

The Marvel Cinematic Universe (MCU) features 23 movies (at last count) that represent over $20 billion in box office revenue. It’s also the most elaborate shared universe that has ever been, with characters from each standalone film crossing over for adventures across the franchise.

“Avengers: Infinity War” and “Avengers: Endgame” wrapped up the first decade of MCU movies with nearly six hours of interstellar, dimension-hopping, time-twisting action. Both installments were beloved by fans and critics alike.

What went right? The filmmakers followed every lesson in this post:

In marketing, as in nerd franchises, there’s no substitute for thoughtful planning. That includes intensive audience research, strategizing and goal-setting, and continuous optimization over time. While your marketing may not have the visceral thrill of, say, Captain America swinging Thor’s hammer, it can still connect with your audience for blockbuster results.

In marketing, as in nerd franchises, there’s no substitute for thoughtful planning. That includes intensive audience research, strategizing and goal-setting, and continuous optimization over time. @NiteWrites Click To Tweet